Six years in a dust storm: life near a coal mine Aileen Harrison reports 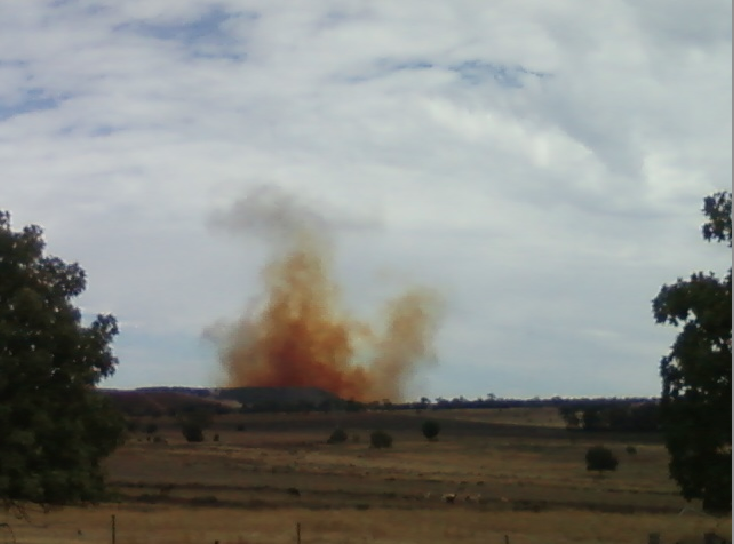 Dust from the open cut coal mine heading their way (Photo: Aileen Harrison)

In April 1998 we moved into our dream home at Highland Plains, near Acland, Queensland, starting a tourist attraction with bus loads of tourists arriving to see our alpacas, as well as our craft and memorabilia display.

Alas for us, the Acland open cut coal mine started up in August 2002.

We were told at the start there would no dust, noise, lights or any other disruptions to our everyday life.

For the first two years, life next to the mine was not pleasant but it was liveable.

We were located about 1.5 kilometres away from the actual mining, yet the lights were so bright we could easily walk  over our property at night without the aid of a torch at night  and the house was so brightly lit that even with thick curtains drawn, it was like sleeping in daylight.

The noise sounded like we were living inside a demolition site – trucks being loaded with rocks, jackhammers breaking up rocks, reversing beepers and revving engines.

Noise levels tested at 76dB outside our bedroom window.

Many, many nights we endured a continual drone.  It was so noisy that it was difficult to sleep in a well insulated house with all doors and windows closed.

The vibrations from the noise rattled up through our pillows – often I couldn’t bear to stay in bed, and would have to go and sit in another room to get relief from the noise.

For years, I spent hours on the phone trying to get the light and noise reduced so that we could get a night’s sleep.

We lived under dust storms for days and weeks at a time.  The dust was so bad that we didn’t open our house for six years, except for the occasional Christmas Day when the mine wasn’t working.

Even with the doors and windows closed, however, very fine dust still came in and every morning I would wipe significant amounts from the window sills.  Most of the time we wore dust masks when we worked outside due to the dust from the mine and some members of the family slept in masks as well.

Coloured dust clouds from the mines’ blasts, mostly orange, would drift over our house. Family members suffered burning nose, throat and chest pains up to for days after blasting.

Our tourist business came to an end after the mine started, as there were often asthmatics on the buses – after a few minutes in our attraction they would get back on the bus and request the driver to take them away.  The buses stopped coming – ending our tourist business.

We were never compensated for this.

The doctors told us that our family were asthmatics . . . strange, because we have now been gone 28 months and we are no longer asthmatics (and we weren’t before the mining commenced).

All the respiratory problems our cattle, horses and alpacas suffered while living near the mine have gone, and the health of our herd has improved dramatically since leaving the mine area.

Towards the end of our time at Highland Plains, we sustained increasing mortality rates in our herds. In our last year near the mine, only 10{17ac88c265afb328fa89088ab635a2a63864fdefdd7caa0964376053e8ea14b3} of our newborn calves survived, many apparently having some brain problems.

In contrast, we haven’t lost any in the last 12 months, living away from the mine.

Not everyone who has left the district is happy but many are prohibited from speaking out due to confidentiality agreements people were forced to sign as part of the sale of their property to the mine.  Not everyone got ‘inflated prices’, as popularly believed. Some settled for much less than independent valuations, because proximity to the mine deterred potential buyers, reducing land prices and leaving only the mine to buy. This didn’t put people in a good position to negotiate.

Many people had to borrow money to relocate to another house similar to what they had. Many still couldn’t afford to purchase in the local area. Most farmers had to move further out where land was cheaper .  Those who stayed close for work moved into smaller, poorer quality homes and properties. Some still keep their belongings in shipping containers.

The ‘rehabilitated’ land may now run some cattle.  However, it will NEVER be able to be used for cropping as before.

* Aileen Harrison has been campaigning against coal seam gas mining in south-east Queensland because she believes people in the region will suffer the same problems she endured with the open cut coal mine at Acland – and worse.

“The dust was so bad that we didn’t open our house for six years.”
Aileen Harrison 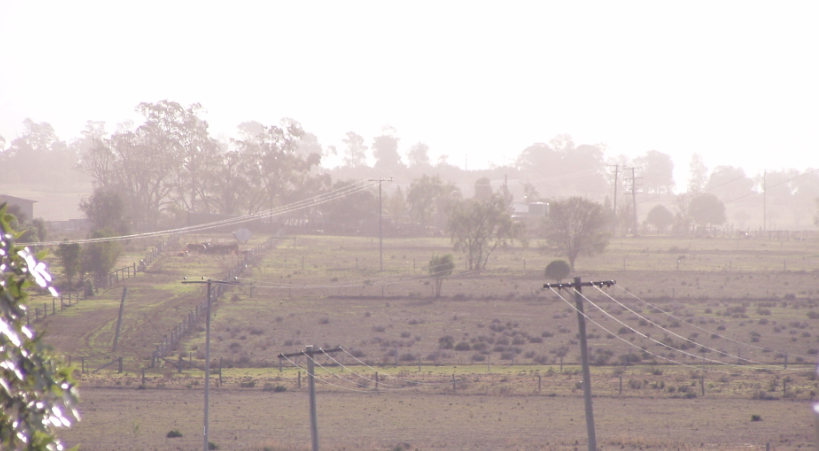 Our life in the dust (Photo: Aileen Harrison)