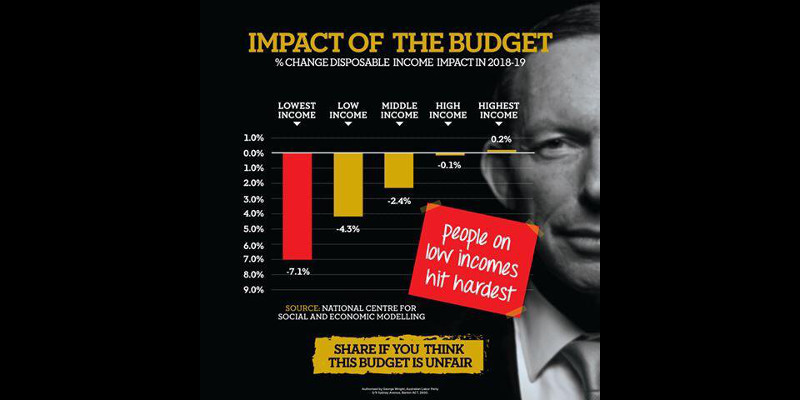 Dr Emerson is a former Minister for Competition Policy and Consumer Affairs, Minister Assisting on Deregulation and Minister for Small Business. He is a member of the Committee for the Economic Development of Australia's Council on Economic Policy and an Adjunct Professor within the College of Business at Victoria University. He is lead consultant to the Australia China Business Council for its Food Summit to be held on 23 May 2014.

This Budget is for the true believers, the Liberal Party base that has stuck with Tony Abbott through thick and thin but was threatening to desert him for Julie Bishop, Scott Morrison or, if they could stomach his belief in global warming, Malcolm Turnbull. Among these true believers are good, hard-working people who have taken risks and reaped their deserved rewards. But they also include believers that taxation is theft, that they are the lifters who are coerced by the state into paying taxes to fund the lifestyles of leaners such as mothers whose partners have deserted them and children who refuse to rise above the noise and violence in overcrowded houses to do their homework and excel at school.

These lifters are being rewarded with their own special tax lurks that Abbott has pledged to keep as long as he remains PM. Treasury figures confirm that the top 20 per cent of income earners receive 55 per cent of the total value of superannuation tax concessions. They would save most of their incomes anyway, but John Howard and Peter Costello figured they deserved a break from the drudgery of paying tax and gave them one by increasing the generosity of superannuation tax concessions for them, especially those over the age of sixty.

When the Gillard Government announced it would rein in the rorts, Abbott ran a “hands off our super” campaign and scrapped Labor’s modest policy upon winning office. Now Abbott’s at it again. Most economists agree the top-end concessions are unsustainable, the Labor Opposition has announced it will reduce them and Abbott has pledged to keep them wide open forever and a day.

His pretext is that closing down tax concessions constitutes a tax rise and he’s opposed to all tax rises. Yet he had no difficulty re-imposing the 15 per cent superannuation contributions tax that Labor had abolished for Australia’s 3.6 million lowest-paid workers. And he has no problem taking through bracket creep an increasing share of the declining real wages of workers. It’s only the tax breaks for the rich that are sacrosanct.

Australia’s on-again, off-again Budget Emergency is off again, having been on in May 2013 and off when Abbott promised on election eve in September 2013 there’d be no cuts to health, education, the age pension, the ABC and the SBS, no excuses and no surprises. By December 2013, it was on again. But the Abbott Government’s response was to worsen the Budget bottom line by giving the Reserve Bank $8 billion it didn’t ask for and scrapping the carbon price, the mining tax, Labor’s superannuation tax reforms and Labor’s crackdown on using car leases for tax avoidance purposes.

Six months later the Budget Emergency was a full-blown crisis. The Abbott Government went for the doctor and sought to penalise the poor for doing the same. The GP co-payment and other savings targeted at the disadvantaged ensured the 2014 Budget was the worst received in living memory. But now, with a nip and a tuck on the income test for the age pension the Budget Emergency has passed. The 2015 Budget suggests that in two years’ time the economy will be roaring along at above-trend growth, on the basis of instant asset write-off that the Coalition criticised in Opposition, repealed in Government and then restored and trebled in the May Budget. As the late Liberal Senator Reg Withers once observed, consistency is the sign of a small mind.

Just take paid parental leave, for example. Having gone from a position of allowing the introduction of paid parental leave over his dead body, Abbott had an epiphany and promised an extravagantly expensive scheme that favoured the well off to replace Labor’s affordable scheme. But not only did he abandon his diamond-encrusted scheme in the 2015 Budget – whose true cost had been hidden in the contingency reserve – he decided mothers accessing both their employer’s scheme and the government scheme were double dippers. Treasurer Hockey went further, agreeing with the proposition put to him by Laurie Oakes that it was fraud. Both the Explanatory Memorandum of the Labor Government’s legislation and the Fair Work Ombudsmen website make it clear that the two schemes are designed to complement each other, no to substitute one for the other.

While the Senate is now being asked to punish these double-dipping mothers, it is still being called upon to support a 20 per cent cut in university funding, fully deregulated student fees, the abolition of Family Tax Benefit Part B for all mothers whose youngest child turns six, no matter how poor they are, and an increase in the pension eligibility age to seventy years. Yet taxpayers will be required to foot half the childcare cost of couples earning $170,000 a year. They are, after all, true believers who need all the help they can get.

Canberra University’s NATSEM has modelled the impact of the Budget on different income groups. The inescapable conclusion is that the Budget remains unfair. When John Howard was Prime Minister he described NATSEM as reputable, talking up its modelling results in the Parliament. Howard also told the National Press Club that the Australian people won’t accept policies that they consider are unfair. The Abbott Government describing the 2015 Budget as fair doesn’t make it so unless, of course, you are one of Abbott’s true believers.