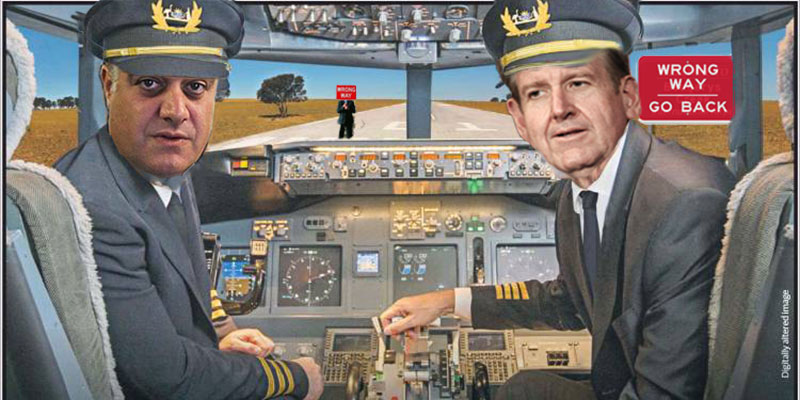 I am not a journalist, nor am I a writer. I don’t belong to any political party, though I will admit that back in the day I was a paid-up Democrat until Meg Lees screwed us over. Now, I don’t believe in political parties at all; I find them terribly UN-Democratic. In my preferred world I would have actual elected representatives whose primary responsibility was to accurately represent their electorates – not the party, not men in grey suits – the punters, then get together with all the other reps to compromise and work together to run this country/state/council. I know, I know … but a girl can dream!
[clear]

Okay we all know that Sydney is the centre of the Universe; just ask every major paper and the TV stations. This week has been particularly bad for those that are not fortunate enough to live in the most important city in the country – yes, note use of sarcasm font there – with all the news being ICAC, royals, Badgerys Creek second airport, and finally the fall of Barry O’Farrell. Even the bloody NRL had only Sydney games on Good Friday.

Now, being Easter and living in a pretty nice Queensland tourism spot, we have a full house of rellies and friends, so of course there has been a lot of chatter over drinks. With the plethora of Sydney-centric news, no-one was particularly interested in what the media thought was important, except of course to comment on Kate’s choice of frock, as you do. Until, that is, it came to Barry O’Farrell …

See, people who follow politics, the press gallery etcetera all think that politics really matters, it is important in our lives and they assume we are all on-board with this narrative.

Personally I have found that the average punter could not care less about politics until they are impacted by a particular decision. Even the odd person who does follow a political party often does so because of generational voting or it suits their purposes due to the likes of business networking, deep down, they don’t really care. A pub poll consensus is that all pollies are as bad as each other.

So this is where Barry O’Farrell’s fall from grace is fascinating. Fact is, the vast majority of the great unwashed outside of NSW don’t have a clue who Barry O’Farrell is, nor care. Well, prior to his spectacular nose-dive that is. Now, everyone in the nation knows his name and, as has been commented on Twitter, it is quite unedifying the glee that is being shown in regard to his downfall, and this celebration has not just been ALP supporters.

In the politically interested segment of society whole forests have been felled with news items explaining and analysing just what happened to bring down old mate Barry. Everything from Government cheerleader Paul Sheehan’s “Barry O’Farrell’s lapse no reason for the guillotine”, The Australian of course is calling for ICAC’s head now that a few Libs have been caught in it’s web, to more balanced pieces like The Guardian’s Lenore Taylor’s “Labor and Liberals both struck down with NSW disease” (though the rest of the nation would disagree that it is only a NSW disease). The commentary is overwhelming: Was he backstabbed? Was it an inside job? Is ICAC a star chamber? Did Barry need to resign? I could fill a page on the angles of analysis in regard to the Premier of the most populous state in this nation’s resignation.

But you know what? Out in punter land where the plebs are too busy actually living, raising families, working and lucky enough to see 5 minutes of the nightly news as they yell at the kids to have baths while making dinner, don’t care less really ‘why’ Barry had to fall on his sword. They don’t care if he was Liberal or Labor, they don’t care if he was a ‘good bloke’, they only care that a pollie lied and actually got pinged for it.

Seriously, that is what they care about. The press gallery and fans of politics all say that ‘the people’ have their ‘say’ at elections. Fact is, they don’t. They don’t really feel they have any choices, it will normally come down to who they dislike least being voted in. Most feel that both sides of politics are only in it for themselves and can’t be trusted. Regardless of what we are told prior to an election they will always backflip. There will always be a technicality as to why they did not really lie to us. The weasel words used are extensive and the average Joe Blow and Jill Dill just turn off as they know the pollies will just bamboozle us with more bulldust as to why a particular promise has not really been broken, how they did not really lie to us. Point is, Joe and Jill smell the bullshit, but their eyes just glaze over, worse, they expect it.

As my dear departed dad used to say: “Well, what do you expect, they are politicians, they couldn’t lie straight in bed if they tried”.

Rarely, does a politician lie and actually get pinged for it. Rarely does a politician actually pay a price for a lie. Hence the downfall of Barry O’Farrell is gold out there in the pubs, barbecues and Easter family get-togethers around the nation. Punters of all persuasions are breaking the golden rule of family harmony – never discuss politics – united in their glee that a politician has lied and, for once, didn’t get away with it.

Look, Barry might be a lovely bloke, he might honestly have forgotten he got the expensive plonk. Sadly for Barry, we punters don’t care how decent he might be.

We know politicians get expensive gifts. We know they get fêted and fawned upon. We know they get their freebies to the corporate boxes at sporting events. We see them living it up with all those niceties in life that we punters can only watch with jealousy, gnashing our teeth with the awareness that we are actually paying for their bloody time while they are enjoying themselves. To add insult to injury we all know that these pollies haven’t been invited to the footy grand final etcetera, out of the kindness of a businessman’s or organisations heart, we know it is so they can influence them, that is the system.

So, unedifying and crass as it may be, when a politician, a Premier no less, gets caught lying and has to stand down because of it we cheer with glee. The fact that a very expensive drop that we punters will never enjoy tasting is at the heart of the lie, well my friends, that is just icing on the cake.

Some free advice for you Prime Minister Abbott, we punters smell blood in the water, we have finally had a sniff of a politician having to accept the consequences of his actions (LIES) just like we in the real world have to AND we liked it!

cheers,
Noely
P.S. Interesting side note: Top three pollies in the nation, PM Abbott, Treasurer Hockey and new NSW Premier Baird are all silvertails from the North Shore of Sydney. In Rugby League parlance we have a common mantra “Anyone But Manly” #JustSaying ;-)