A question of character? 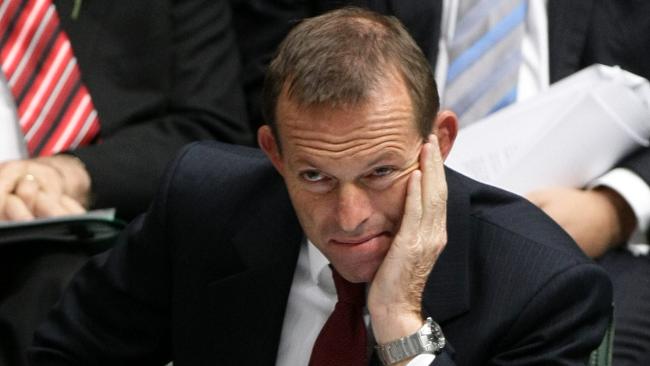 My mouth fell open when I heard Abbott’s final flourish in Thursday’s speech denouncing Gillard as unfit for office. I remembered, suddenly, vividly, Tony Abbott’s very own slush fund. Could he too have forgotten?

It’s ancient history now, Abbott’s slush fund ― but less ancient than the slush fund now in the news. And there’s many unanswered questions about it, and him.

In 1998, Abbott privately agreed to bankroll Terry Sharples, a disaffected One Nation member, to take legal action against Pauline Hanson.

Less than 2 weeks later, he categorically denied to the ABC that he had done so, and 18 months later he repeated the lie, this time to the Sydney Morning Herald’s Deborah Snow. But when she
confronted him with his signed personal guarantee, he said that:

He then created a slush fund he called Australians for Honest Politics and raised $100,000 for it from 12 people he declined to name. The fund began bankrolling more court actions against Hanson and her party.

And there it rested, his lies largely unknown to the public, until court proceedings by Sharples he’d helped kick-start finally resulted in her being jailed.

The overwhelming majority of Australians, like her or hate her, hated that, blamed Abbott for setting the legal wheels in motion, and wanted to know the details.

In a famous interview, Kerry O’Brien demolished Abbott’s facade of misunderstood nice and proved to a much bigger audience that he was a serial liar.

The Sydney Morning Herald’s Mike Seccombe then reported that, in 1998, the Australian Electoral Commission asked Abbott to disclose his donors, as required by law.

He refused, telling the Commission that before seeking donations:

‘I spoke with one of Australia’s leading electoral lawyers who assured me that the trust would not be covered by disclosure provisions.’

The AEC took him at his word and closed the file until forced to reopen it in 2003.

When I asked him on September 2003 why he took legal advice on secrecy before soliciting for donations, he said:

‘I didn’t take legal advice on disclosure till after I got the AEC’s letter. I sought legal advice and got oral advice from a senior lawyer.’

In other words, he lied to the AEC.

Me, I’d give him the benefit of the doubt.

Except that in a later written statement to me, Abbott revealed that his lawyers had not even been briefed with the Trust document before giving advice, and refused to even name the lawyer. Not only that, he told me he wouldn’t disclose the donors because

‘….there are some things the public has no particular right to know.’

Much later, the Electoral Commission decided that Abbott did have an obligation to disclose his donors. Unfortunately, by this time, they could not legally compel Abbott to do so, because the Statute of Limitations has expired. So they asked him nicely. But he refused.

So, there’s still unanswered questions ― and it’s a question of character, isn’t it. So let’s get this sorted?

There are questions of character over the PM and the alternative, both concerning slush funds.

She says she’s done nothing wrong ― apart from being used by her boyfriend.

He says she might be a criminal, no less.

Like many others, I haven’t followed this story in detail, so I listened hard to their speeches on Thursday.

I couldn‘t see anything really bad in his allegations; he didn’t show she was party to the Wilson fraud or had lied about her involvement. But, for me, she made the mistake of assuming her audience knew the detail. She needed to state simply what happened, hard though this must be, when her personal life is involved and, let’s be honest, she’s been made a fool of by a lover.

Too much lawyer talk, not enough human talk, I thought.

Still, I believe her. I believe she was sloppy, but innocent.

If that’s true, then she has two choices now that Abbott has accused her of being a criminal.

She could sue ― or, she could write to Abbott along the following lines.

(All the relevant material in the ‘Abbott fund’ archive of the Sydney Morning Herald’s Webdiary may be found by clicking here. A detailed timeline of the Abbott fund and subsequent communications between Abbott and I are in Chapters 15 and 16 of ‘Not Happy, John’ (Penguin 2004, 2007).