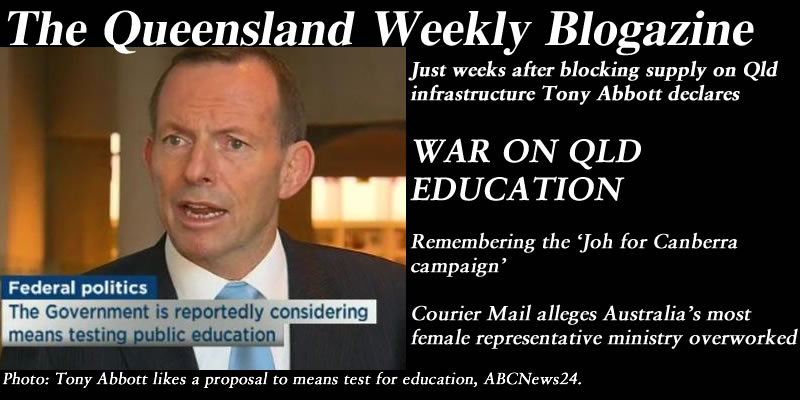 Follow as we cover the week in Queensland politics and news. 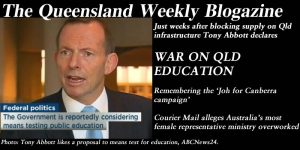 Just weeks after declaring he will block supply to Queensland over funding for infrastructure other than roads, Prime Minister Tony Abbott has again attacked the state by declaring his support for a plan to means test state school families for education. The revelation comes after a leaked report to Fairfax showed the government preferred to fund non-government schools and let Australia’s states and territories fend for themselves.

Early Monday, Abbott labeled the plan as “creative thinking” before later retreating from the statement in question time to agree with his education minister, Christopher Pyne, who denied the plan was Australian Government policy but left the door open to states and territories in providing their own means to test families.

However, Federal Queensland LNP MP for Bowman, Andrew Laming, liked the idea telling Fairfax, “The product has a value, the value should be reflected”.

Queensland Minister for Education Kate Jones slammed the plan declaring Labor would never submit to such a plan. Federal Labor Education Minsiter Kate Ellis backed her counterpart, describing the plan as “walking away” from commitments.

Premier @AnnastaciaMP says she was not impressed by way LNP treated the arts at @BrisFestival launch #qldpol pic.twitter.com/Q3ss98uSTA

Jane Hutcheon interviews David Gonski on One Plus One

Contractors told to stop on Carmichael mine

Palaszczuk critisised Newman for it. Now Palaszczuk is doing it and being criticised for once being critical. Should Queensland governments hold meetings at parliament rather than at resorts? Expenses for the 2 day talkfest are paid out of MP’s allowances.

Steven Wardill and Sarah Vogler reported, “Campbell Newman and his LNP colleagues have traded campaigning in Redcliffe for a two-day talkfest at a ­picturesque rainforest retreat. The Queensland Premier and most of his 73 MPs last night bunkered down at O’Reilly’s Rainforest Resort in the Gold Coast hinterland for a two-day stay.”: Campbell Newman running for the hills as he moves from Redcliffe campaign trail to Gold Coast hinterland.

Katrina Blowers reported: Premier a ‘hypocrite’ over rainforest getaway The Premier is being called a hypocrite for taking her ministerial team on a two-day getaway to a rain-forest resort instead of staying at Parliament.

Katrina Blowers reported: $4b in education funding at risk – Qld says no to means-tested state schools.

. @cpyne you know full well that no Labor govt would ever means-test public education. @AustralianLabor

It's a proposal developed by your govt, @cpyne. Might be back peddling now, but clearly been considering it for some time.

The Gov is up to their fourth attempt to destroy Medicare, and now they have four options to destroy our schools… http://t.co/DzdNBM1JwH

Or perhaps @cpyne you have an "emotional commitment" to your Option 2-Feds only providing funding for non-gov schools &abandoning public ed?

Really @cpyne, you prefer your Option 1 – Feds walking away from funding all schools?

Wow. Asked to deny fed walk-away from schools, PM: "Public schools are absolutely the business of the state and territory governments".

Good on @JayWeatherill for admitting that 'a discussion paper' is just that and eschewing the opportunity to bag the Australian Government.

The Australian Government does not and will not support a means test for public education. Full stop. End of story. #auspoI

If the states and territories want to charge wealthy parents fees for public schools that's a matter for them. #auspoI

Charging wealthy parents for their children to attend public schools is not the government's policy. I don't support it. #auspoI

.@AndrewLamingMP "Should high income earners be paying to attend state school? My view is firmly yes! Most importantly a price signal"

PM Abbott – we have no role at all in the running of public schools. Absolutely the biz of state and territory govts. @smh @theage