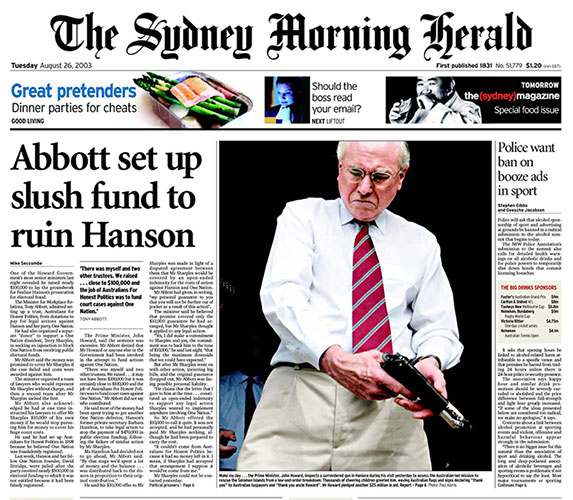 One of the Howard Government’s most senior ministers last night revealed he raised nearly $100,000 to lay the groundwork for Pauline Hanson’s prosecution for electoral fraud.

The Minister for Workplace Relations, Tony Abbott, admitted setting up a trust, Australians for Honest Politics, from donations to pay for legal actions against Hanson and her party, One Nation.

He had also organised a separate “donor” to support a One Nation dissident, Terry Sharples, in seeking an injunction to block One Nation from receiving public electoral funds.

Mr Abbott said the money was promised to cover Mr Sharples if the case failed and costs were awarded against him.

The minister organised a team of lawyers who would represent Mr Sharples without charge, and then a second team after Mr Sharples sacked the first.

Mr Abbott also acknowledged that he had at one time instructed his lawyers to offer Mr Sharples $10,000 of his own money if he would stop pursuing him for money to cover his huge court costs.

He said he had set up Australians for Honest Politics in 1998 because he believed One Nation was fraudulently registered.

Last week, Hanson and her fellow One Nation founder, David Ettridge, were jailed after the party received nearly $500,000 in electoral funding to which it was not entitled because it had been falsely registered.

The Prime Minister, John Howard, said the sentence was excessive, but Mr Abbott denied that Mr Howard or anyone else in the Government had been involved in the attempt to fund actions against One Nation.

“There was myself and two other trustees. We raised … it may not have been $100,000 but it was certainly close to $100,000 and the job of Australians For Honest Politics was to fund court cases against One Nation.” Mr Abbott did not say who contributed.

He said most of the money had been spent trying to get another One Nation defector, Hanson’s former private secretary Barbara Hazelton, to take legal action to stop the payment of $470,000 in public election funding, following the failure of similar action by Mr Sharples.

Ms Hazelton had decided not to go ahead, Mr Abbott said. “By that stage we’d spent a lot of money and the balance … was distributed back to the donors in proportion to their original contribution.”

He said his $10,000 offer to Mr Sharples was made in light of a disputed agreement between them that Mr Sharples would be covered by an open-ended indemnity for the costs of action against Hanson and One Nation.

Mr Abbott had given, in writing, “my personal guarantee to you that you will not be further out of pocket as a result of this action”.

The minister said he believed that promise covered only the $10,000 guarantee he had arranged, but Mr Sharples thought it applied to any legal action.

“Yes, I did make a commitment to Sharples and yes the commitment was to back him to the tune of $10,000,” he said last night, “that being the maximum downside that we could have expected.”

But after Mr Sharples went on with other action, incurring big bills, and the original guarantor dropped out, Mr Abbott was facing possible personal liability.

“He claims that the letter that I gave to him at the time … constituted an open-ended indemnity to support any legal action Sharples wanted to implement anywhere involving One Nation.”

So Mr Abbott offered the $10,000 to call it quits. It was not accepted, and he had personally paid Mr Sharples nothing, although he had been prepared to carry the cost.

“It couldn’t come from Australians for Honest Politics because it had no money left in it. I mean, if Sharples had accepted that arrangement I suppose it would’ve come from me.”

Mr Sharples could not be contacted yesterday.