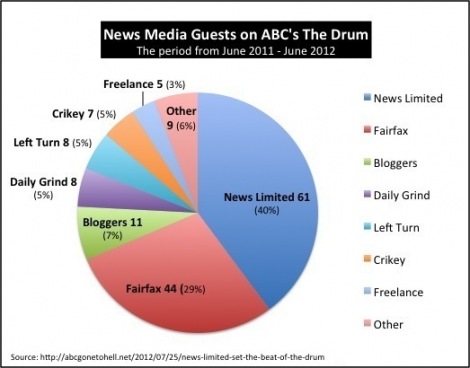 @margokingston1 My advice: Don't watch it in the first place

@paulwiggins @mrdenmore First time I've ever watched http://t.co/8G88a38zgu Freaked out by it. So awful. So jokey, who gives a shit.

@margokingston1 @paulwiggins You obviously missed my Twitter spat with its host weeks back. He called it an opinion show. Yep, short of that

Here is the Mr Denmore (Jim Parker) post referred to above, republished with permission.

Our public broadcaster is our most trusted source of news. So why does it spend so much time and money chasing cheap and predictable opinions from a small group of people who have plenty of other places to bang their tin drums?

Aware of changing technology and of being required to do more and more with less and less, the broadcaster in its annual report talks about how audiences are expecting to access content wherever they are and across multiple platforms.

The flagship is the still relatively bright and shiny ABC News 24, a network that according to the national broadcaster “reached” 13.1{17ac88c265afb328fa89088ab635a2a63864fdefdd7caa0964376053e8ea14b3} of the metropolitan population last year. I am not sure how many of those being “reached” actually watched it, but that seems to me a fairly low figure for an institution that proudly brands itself as Australia’s only 24-hour TV news channel.

Apart from audience, it is arguable how much of the news channel features actual, you know, ‘news’. Highlighted programs include ‘The Drum’ – an opinion show on the issues of the day featuring “an ever changing panel drawn from all walks of life”.

In reality, The Drum is a talking shop where the same old faces from the same institutions – News Ltd, the IPA, the CIS and former party hacks – issue the same predictable talking points. In fact, Independent Australia did some interesting analysis, testing the ever changing panel concept here. 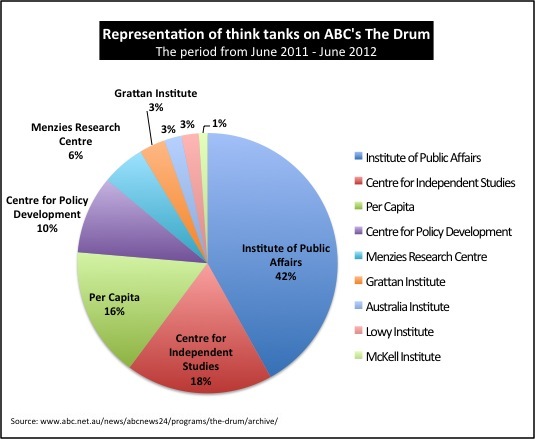 One can feel sympathy for the show’s producers. Getting talking heads into a studio every single day to blather on about stuff that the vast majority of the population has yet to catch up on (or indeed cares about) is a soul-destroying job.

But it’s not just The Drum. There are equivalent talking head forums on business, the environment, the arts, health, food and, of course, rural and regional ‘Straya’.

Now television is an expensive medium, the most expensive in fact. What TV does well (surprise surprise) is pictures, colour and movement.  Doing TV news properly means sending reporters out of the studio with camera crews and interviewing newsmakers in their natural settings.

But when television just becomes a studio-bound talking shop, it looks like a very expensive version of a far superior medium for that sort of thing – radio. What’s more, it rarely breaks news. It is just yet another opinion-mongering echo chamber.

Now I know the ABC has a very high-falutin’ charter which requires it to appease every noisy constituency in the land, not the least of which are the grumpy culture warriors of the Right who resent the very existence of a national public broadcaster.

But I would argue that if Mark Scott wants to get more bang for his buck, he should ditch his expensive trophy 24-hour ‘news’ channel and put the money into more actual newsgatherers in the radio and digital space (not ‘producers’ who cut and paste from The Australian every morning).

That means more content along the lines of the excellent radio documentary Background Briefing, more youthful experiments like Hungry Beast and more established long-form TV current affairs like Four Corners. And it means far less of the cheap he said-she said, view-from-nowhere programs like The Drum and Q and A.

Yes, I know Scott has a vision of the ABC as a sort of town hall or village square, where people can air their opinions. But I’d argue that social media has made that vision redundant. Twitter features millions of points of view and users can customise their experience. This makes the idea of listening to Peter Reith and some IPA lackey every second night express predictable opinions on The Drum rather unappealing, no matter how it might appease the culture warriors in parliament and the nabobs of News Ltd.

The fact that the ABC is regularly polled as the most trusted news media outlet in the country is even more reason to transfer its limited and declining resources to actual news rather than making the national broadcaster a sort of empty echo chamber where old media hacks and Murdoch lapdogs repeat lines they have already churned out in their print editions.

This isn’t just about the ABC. Much of the commercial media is now in a death spiral, with its journalistic standards falling almost as fast as its life expectancy. Just look at The Daily Telegraph. When not brazenly making stuff up to play on its audience’s prejudices, the nation’s biggest selling newspaper dedicates a good chunk of its resources to ridiculous promotions that have nothing to do with journalism.

If public broadcasters don’t do serious public interest news, no-one will. Without the ABC pursuing stories that need to be told (stories like the untold Slipper saga), no-one will tell them.

I’d pay more than 8 cents a day for that. Wouldn’t you?

(Disclosure: I was invited onto ABC radio four times last year to pontificate on my views about media – three times on Jonathan Green’s ‘Outsiders’ and once on Richard Adey’s ‘Media Report’. But I’d sooner Jonathan and Richard spent their airtime and limited dollars in pursuing news).