After the CSG boom, Narrabri farmers concerned about the bust: @CarlyWladkowski reports #Pilliga 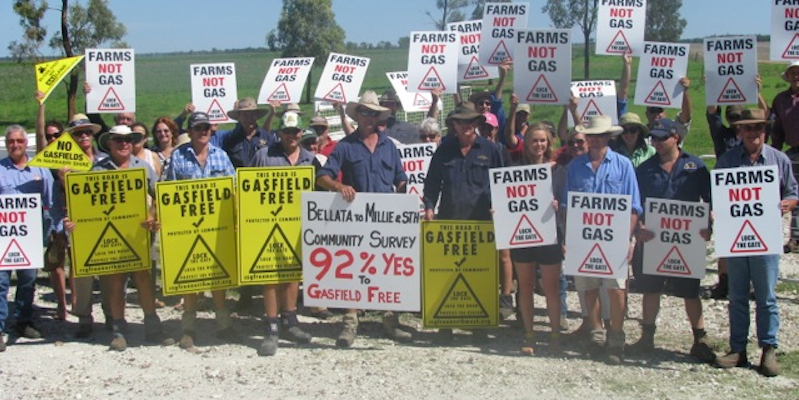 Journalism student at University of Technology, Sydney
Carly is originally from Albury-Wodonga, on the border of NSW and Victoria, along the Murray River. "I have always been interested in people and places, which led me to my degree," she said. "I am very interested in print and online media, politics and international relations."

First year journalism students of the University of Technology, Sydney, are required to undertake field work as part of their degree. ‘News Day’, as it is known, consists of the subject co-ordinator and tutors finding stories for students, sending them off to investigate and write the story up according to a deadline. The subject co-ordinator asked who would be willing to travel west of Sydney for a story, and there were four volunteers. “We were required to drive to the Leard State Forest to uncover four angles on the same event,” one of the students, Carly Wladkowski, said. “The discovery of stories required us all to be open with communication forms, such as Twitter and Facebook, to allow us to find sources and arrange meetings. It was a rewarding experience, learning how to capture and bring the issues of others to the public.”

Residents of Narrabri, in the northwestern plains of New South Wales, met last week to protest exploratory mining on local farms, and the Santos proposal for the region.

Campaign groups, such as Lock the Gate and Greenpeace, have been working with local farmers to co-ordinate efforts against a proposed Coal Seam Gas (CSG) field.

Local farmers at the protest also questioned Santos’ involvement within the Narrabri community.

Nicki Kirkby, a farmer from nearby Bellata, said: “The community is pretty split at the moment… [lots of people] don’t want to be publicly one way or the other”.

“Our ability to sponsor lots of community things has been down in the last few years, [Santos] have really capitalised on this,” Ms. Kirby said, “it really cons the community and splits the community.”

Santos, a South Australian based company, submitted its Preliminary Environmental Assessment to the NSW state government in early April.

“Generally in town, people are accepting the Santos message… us here, in this area, we have a lot to lose,” said Geoff O’Neill, local farmer and campaigner, “we don’t have a PR machine like Santos.”

According to Santos, the introduction of the Pilliga CSG field would bring over 1200 jobs to skilled local tradespeople, and potentially up to 200 ongoing positions. The company also introduced a $160 million community fund in conjunction with the CSG field.

In a press release, Santos stated: “Santos understands that benefits generated by the project need to be delivered to the community while minimising any potential impacts.”

Mr. Drew Hutton, an environmental campaigner and Lock the Gate activist, noted there is very little research on social impacts on mining towns.

“It is only about 11 per cent [of people] in mining towns [who] register they are better off with mining. 60 per cent say they are worse off, not just economically,” he said.

“Anecdotally… they can’t sleep, and sleep is so important to mental health. Especially the men [near coal mines]… they seem to be prone to depression.

“Next to coal mines, it is particularly prevalent.”

“Some people make a lot of money, most people don’t,” he said.

“When they leave, the construction phase is over, the town is empty… every boom, there is a bust that follows.

“It is a moral desertion of a whole district.”

Santos was contacted for discussion, but no comment was provided. The company’s community and social policies include meaningful employment and funding for local groups, but many believe the social policies need to be considered further to prevent social damage.