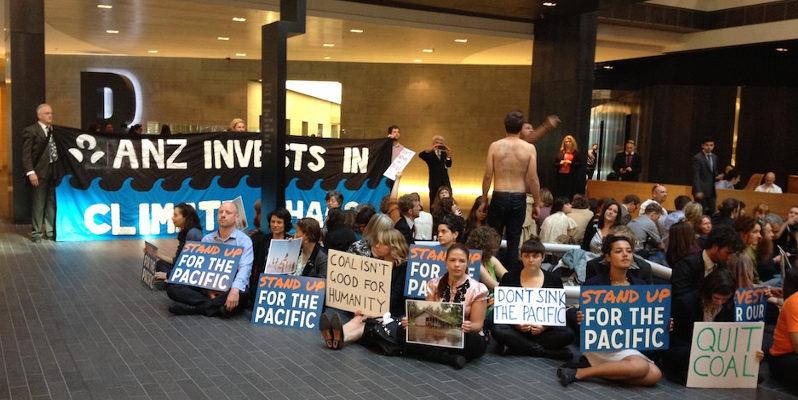 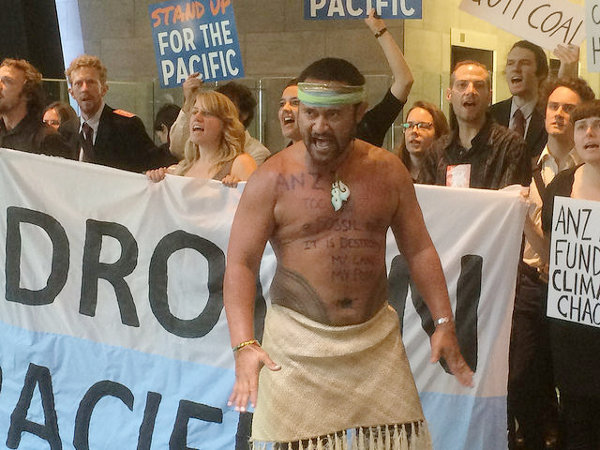 The Pacific Climate Warriors travelled to Melbourne today and were part of an occupation of the lobby of the Headquarters of the ANZ Bank. Over eighty people participated standing in solidarity with Pacific Islanders whose homes and cultures are being destroyed by fossil fuel expansion.

Here is a short video of last Friday’s blockade:

In Melbourne today this is how the occupation of the ANZ Bank lobby unfolded:

ANZ it's time to stop your investments into the fossil fuel industry. @ANZ_AU #StandUpForThePacific pic.twitter.com/I6ytjq0PYs

#ClimateWarrior Mika speaks passionately about the climate change impacts and the need to act. #StandUpForThePacific pic.twitter.com/VMbAMJ0Ddp

Coal isn't good for humanity… That's a takeaway message from the #ClimateWarriors of the Pacific. pic.twitter.com/AEt4SAkydF

“Citizens, people, workers: We stand here in respect. We apologise for disrupting your morning. But such disturbances does not match the destruction of this company, is doing to our people. We are here today standing in solidarity with the people of Australia. For the people among us, we are the human face of climate change.”

Lifts were shut down with people locking on preventing there use. Police arrive.

Police have arrived, we have shut down lift access with people locked on, u gonna need backup boys #ClimateWarriors pic.twitter.com/azhvaELYge

Other climate warriors are telling their stories elsewhere:

#ClimateWarriors are telling their stories.Here Kaio speaks to the Pasifika Womens Alliance in QLD pic.twitter.com/HBIR14y2S7

You can see office workers gathered around watching the protest from higher level baconies:

ANZ was not the only target. ALCOA is also being heavily criticised for trying to sell the Anglesea power station rather than install pollution scrubbers or close it down and rehabilitate the open cut coal mine. The power station and coal mine has been the subject of protests by local residents.

.@Alcoa while you are trying to sell your #Anglesea coal plant people are losing their homes #standupforthepacific pic.twitter.com/rDT1fdetVP

Haka and harmonies of hope and solidarity echoed between the cavernous walls in the building Lobby.

ANZ called this an aggressive protest. See for yourself:

#ANZ say peaceful #StandUpForThePacific occupation is "aggressive." Take a look for yourself: http://t.co/JTCbYJ4xth

The Age reported on the protest:

People were inconvenienced, was it the right forum? when all other forums have failed? When Australia does not even send our Prime Minister to attend the Leaders summit at the recent UN Climate Summit in New York clearly showing the world that Australia is a climate leaner not a lifter.

@onyxlioness my people have already lost their home. You don't understand how many forums we've tried. #StandUpForThePacific 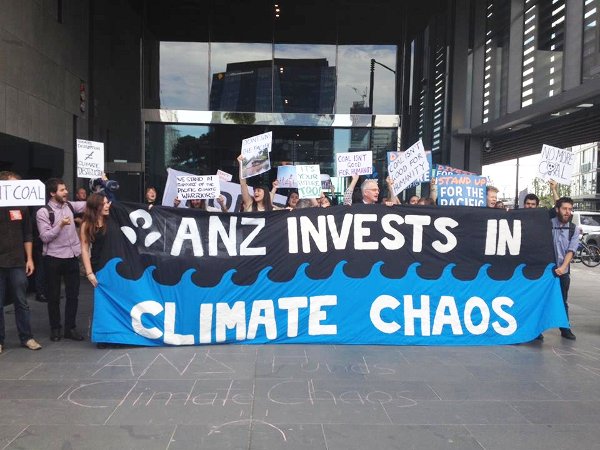 Protests and arrests in Perth and Canberra

In Perth on Tuesday Buru Energy’s headquarters were peacefully occupied for 9 hours to protest fracking in the Kimberley region and in solidarity with the Pacific Climate Warriors. The protest ended with Trish McAuliffe (74) and Cathy Hall (66) arrested, according to a 350.org report. More photos on Facebook: Perth Stands in Solidarity with the Pacific 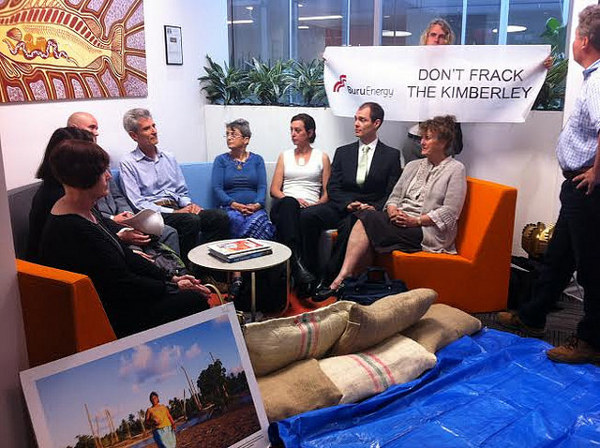 Occupation of Buru Energy offices in Perth to protest fracking in the Kimberley and solidarity with Pacific Climate Warriors. Photo: 350.org (CC BY-NC-SA 2.0)

There was also a protest in Broome with Traditional Owners telling Buru: ‘Don’t Frack the Kimberley – we stand with the Pacific Climate Warriors against new fossil fuels!’

The Minerals Council of Australia headquarters in Canberra was peacefully occupied by 15 people on Tuesday with Climate Warriors from Vanuatu, Tuvalu and Fiji requesting a meeting with Director Brendan Pearson or another executive to hear how Australia’s fossil fuel industry is negatively effecting the lives of people across the Pacific region. Ten people were arrested in the occupation. 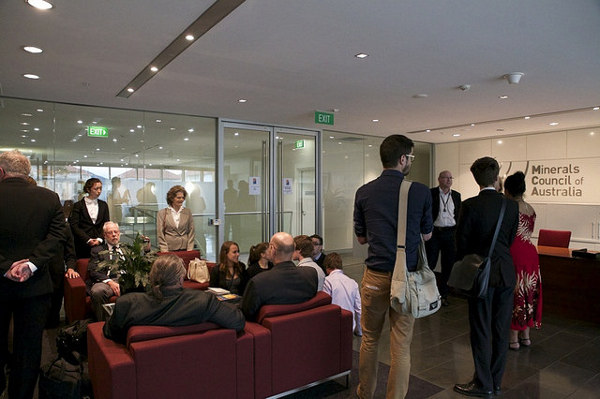 Photos used for this report provided by 350.org under a Creative Commons NonCommercial licence (CC BY-NC-SA 2.0)