Legal Writer at No Fibs
A student Activist in the late 1960s and early 1970s, Joan is still doggedly swimming against the tide, and in answer to two questions she's still commonly asked: "Yes I am an Evatt and we're all related. No, I am not a lawyer. I just seem to have a plethora of legal subjects acquired in various qualifications and a half-finished law degree. I'm also potty-mouthed". For the last 11 years Joan has taught at the Petersham Media Centre, TAFE.

In the 1970s and early 80s Joan was industrial officer then federal assistant general secretary of Actors' Equity. She worked for Network Seven in news, current affairs, and 'Willesee' when news was shot on film. She also freelanced for Film Australia, Digby Wolfe Productions, and E-News. From 1984-2005 she ran post-production and production company, VISUALEYES Productions, which won a number of awards for short issue-based trigger films, oversaw ABC post-production, and created television commercials. 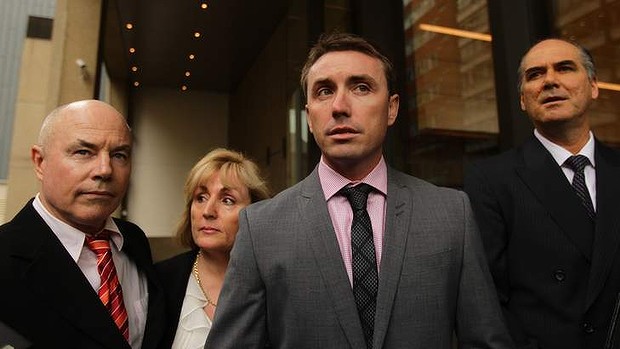 James Ashby, flanked by his parents and his lawyer Michael Harmer at the NSW Supreme court for their appeal application. Photo: Kate Geraghty, Fairfax

With the exception of Michael Harmer all the key players were there for the media to take quick photos and 15-second video grabs. Peter Slipper and James Ashby are starting to look a little frayed around the edges as they prepare to endure yet another round in this legal saga.

Yesterday was the first day of a two-day hearing by the Full Court of the Federal Court. Justices Mansfield, Siopis and Gilmour are concurrently hearing both the application for leave to appeal along with the more substantive issues of the appeal itself.

Justice Mansfield tipped the wink to the parties’ representatives as to how much time the court thought should be allocated to each of the lawyers. For Michael Lee SC, Mr Ashby’s counsel and the first legal cab off the rank, this was always going to be difficult. His job is to plough the field for the first time with no real indication of the legal hoops he may have to jump through when they are presented to him by any one of the justices presiding.

Lee’s argument is that Rares J. made three fundamental errors resulting in Ashby not being able to present his case in full and therefore ‘be determined on its merits.’ He put forward the view that Ashby had not received procedural fairness.

Lee argued that the finding of an abuse of process by Rares J was
flawed as the seriousness of that finding required an onus that was a ‘heavy one’. Rares J needed to be ‘cautious’ in his consideration of this issue and, according to Mr Lee, Justice Rares wasn’t.

Mr Lee further argued that Justice Rares adopted an ‘impressionistic view’ about Mr Ashby’s involvement in a conspiracy to harm Mr Slipper with inferences being drawn that compromised the fact finding process.

The third error in the Rares decision, according to Mr Lee, involved the conduct of Mr Ashby’s solicitor, Mr Harmer. This was dealt with comparatively briefly as Mr Harmer, now a party to the appeal, is being separately represented by counsel, David Pritchard SC.

Lawyers will tell you it is not necessarily the law where parties representing themselves can come unstuck but rather the lack of knowledge of, or practice in, the procedures required and their importance.

The rest of the day’s proceedings were occupied by submissions from David Pritchard SC appearing on behalf of Michael Harmer, Mr Ashby’s solicitor.

The decision of Rares J was especially critical of Mr Harmer, calling into question his professional conduct.

Questions were asked by their Honours over the level of detail in the originating application drafted by Mr Harmer. This application found its way into the press before Mr Slipper had seen it, as he was overseas at the time.

The application included details of the ‘2003 allegations’ of a seemingly consensual sexual relationship between Mr Slipper and a member of staff. An allegation of Cabcharge fraud was also included as was the indication of Mr Ashby’s intention to report the matter to the AFP. Of course, the prime allegation was that Mr Slipper had sexually harassed Mr Ashby ‘in the course of his employment.’

The game of second guessing what judges are thinking during the progress of a hearing is a long and well-established one. More often than not even the most skilled in this game fail dismally. 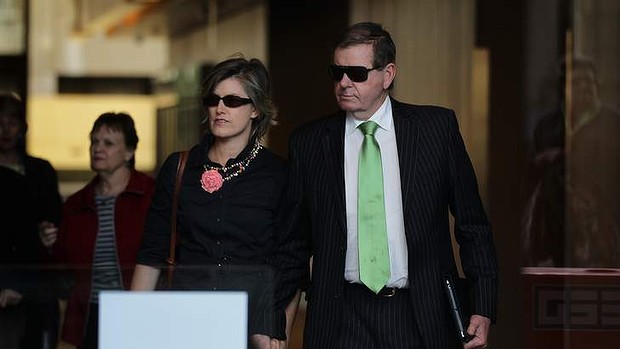 Questions asked of lawyers during the progress of a case can be deceptive if relied upon. Nevertheless all judges asked plenty of questions during both counsels’ oral submissions. Of seeming significance to their Honours were two issues to which they kept returning.

The first is the primary or subjective intention of Mr Ashby in bringing this matter to court. Was his original intention to pursue an issue of sexual harassment or was it to use the judicial process to harm Mr Slipper for the benefit of others, namely Mr Mal Brough and the Federal LNP? This is at the core of the ‘abuse of process’ finding by Rares J.

The second issue, which resulted in a large number of question and answer sessions throughout the day, was the matter of the ‘Genuine Steps’ obligation.

The ‘Genuine Steps Rule’ is a relatively new set of procedures introduced in the Commonwealth’s ‘Civil Dispute Resolution Act (2011)’ requiring parties to take necessary alternative measures in an endeavour to resolve their dispute before heading off to court. Both parties in a legal stoush have to file ‘genuine steps statements’ outlining what they’ve done in trying to settle the dispute.

The argument put by both Ashby’s and Harmer’s legal representatives for the seemingly inadequate Genuine Steps process, was the one of urgency. All three judges questioned the reasoning behind bringing the matter to court without going through all the alternative remedies available to Mr Ashby.

At one stage Mr Pritchard was asked the $64,000 question: the matter of payment to Mr Harmer. It was the question by Justice Siopis that caused head-turning consternation at the bar table and was never really answered. Siopis J wanted to know if there would be an apparent difference if Mr Harmer was ‘an investor in the proceedings?’ The spluttering silence of both legal counsel was his reply, and the question wasn’t pursued.