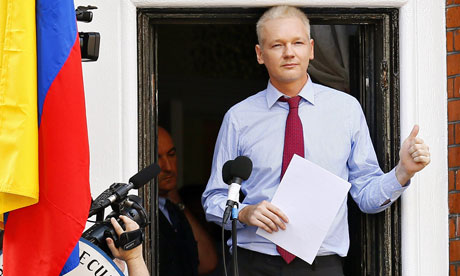 According to both UMR and Morgan support for the WikiLeaks Party, and its Victorian Senate candidate Julian Assange, is running at over 20 percent Australia wide. Whether that support translates into Senate seats in Victoria, New South Wales and Western Australia where the Party is fielding candidates depends on a range of variables and the Party’s visibility in the forthcoming federal election campaign.

While other campaigns have all their candidates living in Australia the WikiLeaks Party campaign is based out of London and Melbourne. Julian Assange, courtesy of Sweden’s appalling track record since 9/11 in handing over individuals to the US to be subjected to cruel and unusual punishment and the Gillard government’s abject failure to help one of its own citizens, is living in the Ecuadorian Embassy in London.

I spent three days with Julian a fortnight ago at the Embassy. What struck me about Julian Assange the human being, as opposed to the journalist and publisher of WikiLeaks, was his extraordinary resilience. This is a man who has lived indoors now for a year and one day at the time of writing. Night and day become blurred, as does the 24 hour clock. Yet Assange is in fine fettle. His enthusiasm for the Senate campaign in Victoria is as buoyant as it would be if he were working from the Party’s campaign headquarters in Fitzroy.

If the idea of the Australian government were that Assange might be broken by the conditions he endures each day then on current evidence it is a gross miscalculation.

For the WikiLeaks Party and Assange this election campaign is about injecting fresh ideas and vision into what is surely the most rank and toxic political climate in this Nation’s federal democratic history. Over the past four days we have had a Perth radio host questioning Prime Minister Gillard about her partner’s sexuality and then on the ABC of all places two absurd and nasty outbursts – one by veteran journalist Piers Akerman and another by a woman who calls herself an industrial relations consultant and who seems to be the ABC’s token young woman right wing populist.

By contrast on Friday evening in Perth I participated in a GetUp event for minor parties – along with the WikiLeaks Party was the Australian Sex Party, the Pirates Party, the Socialist Alliance and the Greens. To a packed auditorium this group spoke optimistically of a better Australia. One where policy ideas took precedence over smear and a race to the bottom in the form of red neck policies.

And again by contrast to the antics of the ‘Canberra club’ last week the world saw a brave man in the form of former US security contractor Ed Snowden reveal that Washington is essentially spying on all its citizens and that its allies are up to their necks in this as well.

This should concern all Australians because every time one of us communicates electronically with the US that communication is being noted. But do our mainstream politicians care? No of course not. The US can do what it wants thank you very much. This lack of reaction to Snowden’s evidence says much about the mainstream political parties’ moral and policy bankruptcy.

At least in this election campaign voters have some choice. Its either the establishment in the form of the Coalition and ALP and its maverick offshoots like the Katter Party or Clive Palmers UAP, or its individuals like Julian Assange, the WikiLeaks Party and others which represent seemingly quaint notion that the Senate and the Parliament generally ought to be a real check on the Executive and that policy ought to be governed by having all information on the table.