Australia is a climate leaner, not a lifter: @takvera comments on #Climate2014

Australia’s Foreign Affairs Minister Julie Bishop took the podium at the United Nations Climate Summit to an almost empty plenary to announce Australia was balancing economic growth with climate action, with a 5 per cent cut based on 2000 levels by 2020 using $2.55 billion to fund emission reductions under the government’s Direct Action Plan. (Read speech) Two photos tell the story of her address to this climate summit, of the vast gap between the government’s rhetoric and actual action.

The first is the more flattering image the Abbott Government would prefer you to see tweeted by Australia’s ambassador and permanent representative to the United Nations Gary Quinlan: 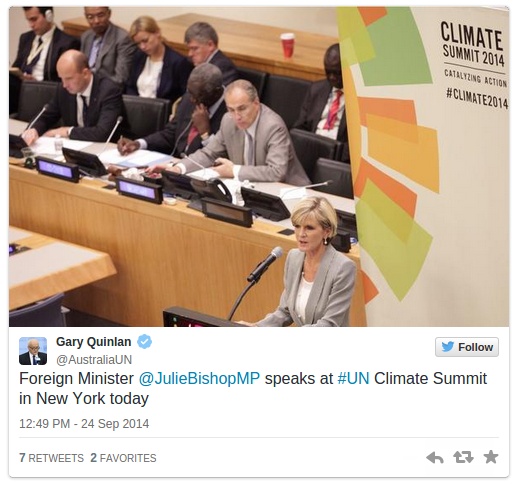 The second photo is a wide angle shot encompassing much of the plenary room and shows that most delegates and ministers were not present when Ms Bishop delivered her statement. While this does not mean much in itself, it is symptomatic of Australia being diplomatically shunned for it’s retrograde steps on climate policy and snubbing of the summit by Prime Minister Tony Abbott who attended UN sessions discussing terrorism the following day. 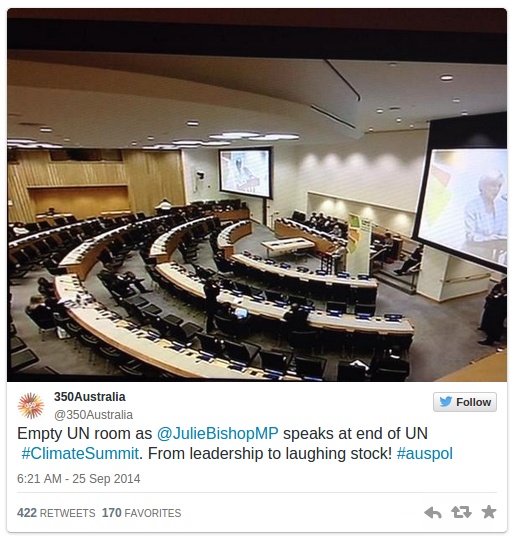 Australia’s climate stance has been savagely condemned at New York summit, not least by our neighbours, Pacific Island nations who accuse us of abandoning them to the plight of more extreme weather and rising seas. 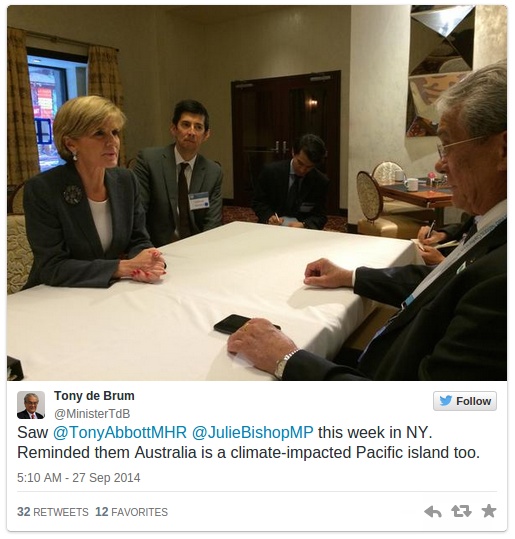 Australia’s current greenhouse gas emission reduction targets were established and submitted as part of the voluntary Copenhagen protocol and featured a minimum unconditional target of 5pc cut in emissions, but included the facility to increase this 2020 target up to 25pc if other nations were taking comparable action. Australia also set a post-2020 target to reduce Australia’s greenhouse gas emissions by 80pc on 2000 levels by 2050. (See Australia’s emission reduction targets)

At the summit Ms Bishop did not announce any new ambitious targets for Australia, just reiterated the basic target we’ve had since 2009. In fact, Bishop rejected requests by United Nations Secretary General Ban Ki-moon for deeper cuts to greenhouse gas emissions before the summit.

Even the figure of $2.55 billion is a fudge, as only $1.1 billion has been allocated in the 2014 budget and forward estimates according to a tweet by journalist Ben Eltham. Currently the Direct Action Plan Emission Reduction Fund (ERF) is held up in the Senate with Labor, Greens and Palmer United Party senators blocking this measure. You can read Ben Eltham’s column on the climate summit at New Matilda: Obama Is Right, Climate Change A Greater Threat Than Terror.

There was no mention that the Climate Change Authority had already conducted a review of comparable targets to 2020 for Australia and found that a target of 19pc reduction in emissions by 2020 already could be justified.

Ms Bishop said to the Summit: “We are striking the responsible balance of safeguarding economic growth while taking action on climate change”. There is an unspoken assumption here that carbon emissions are required for economic growth, but this has been shown as false, with low carbon technologies able to break the nexus between growth and carbon emissions.

A report released at the summit examining 15 countries, including Australia, found that deep decarbonisation pathways were possible to decouple growth from carbon emissions (See the Conversation). The Australian report found that Australia can reach net zero emissions by 2050 while the economy continues to grow at a similar rate as today — 2.4pc of GDP per year. The report, Pathways to Deep Decarbonisation in 2050: How Australia can prosper in a low carbon world (PDF), was prepared by Climateworks and the Australian National University, drawing upon CSIRO and Victoria University modelling.

Ms Bishop also outlined in her statement how Australia’s $5 billion aid program to alleviate poverty assists in building resilience to climate change in many Pacific nations. She neglected to detail that in the May 2014 budget the Abbott Government cut $7.6 billion in foreign aid over the next five years. Australia’s foreign aid budget had bipartisan support before the election of being maintained at 0.5pc of Gross National Income (GNI) and the Abbott Government reduced this to 0.3pc.

UNICEF Australia CEO Dr Norman Gillespie lambasted the reduction in foreign aid in the budget saying it was, “a clear case of a broken promise to the world’s poorest and most vulnerable people”.

“Among OECD countries providing aid, Australia is now set to be the least generous allocating just 0.29 per cent of Gross National Income (GNI), a chasm away from the promise made by Prime Minister Howard who, in 2000, signed onto the MDGs,” Dr Gillespie said. “This was a global commitment and our peers, like Britain, are meeting their end of that bargain and committing 0.7 per cent of GNI.”

Phasing down hydrofluorocarbons under the Montreal Treaty

Julie Bishop announced Australia would join with other countries in the declaration on phasing down hydrofluorocarbons (HFCs) under the Montreal Protocol. This treaty has worked to phase out all ozone depleting substances in industrial and commercial processes since January 1, 1989, to reduce the growing ozone holes in polar regions. These chemicals are also very potent greenhouse gases, so reduction has already helped mitigate and slow the extent of global warming as well as reducing the Antarctic ozone hole.

But this announcement was not entirely new either, although it is the first time the Abbott Government has publicly endorsed the declaration.

The phasedown of HFCs was announced in September 2013 as part of a bilateral agreement between the US and China (See Whitehouse media release), and secondly in the G20 Leaders Declaration at St Petersberg, Russia, in September 2013 (section 101). Australia’s Foreign Minister Bob Carr attended this meeting due to the event being held during the election preventing Prime Minister Kevin Rudd from attending.

The last contribution announced by Julie Bishop was Australia’s hosting of an Asia-Pacific Rainforest summit in Sydney on November 12. This is seen as “practical climate action in our region”.

Ms Bishop’s motherhood statements on rainforests as “invaluable sources of biodiversity and sinks of greenhouse gas emissions” are welcome, and the challenge to reduce deforestation in the region is laudable, but her government has done far more harm in attempting to de-list 74,000 hectares of world heritage listed Tasmanian forests to logging, a proposal rejected by UNESCO in June 2014.

Ian Lowe, emeritus professor in the School of Science at Griffith University and former president of the Australian Conservation Foundation said in an article at The Conversation that, “environmental protection is being given a lower priority than it has by any federal government since the first environmental legislation was introduced some 40 years ago”.

The rainforest summit is a little bit of green-washing to distract from the strong anti-environmental record of the current federal government.

The road to a global agreement in Paris

For the Paris UNFCCC meeting in December 2015 Australia needs to come up with new targets for the global agreement for after 2020.

Bishop told the summit: “Australia will consider its post-2020 target as part of the review we will conduct in 2015 on Australia’s international targets and settings. This review will consider the comparable actions of others, including the major economies and Australia’s trading partners”.

When Tony Abbott spoke the following day in the discussion on terrorism he said Australia would lead by example, with no mention of our laggard policy on climate change. Tony Abbott is big at playing up terrorism and the fear card to distract from his government’s trashing of Australia’s climate action, with the electricity sector already seeing the first rise in emissions for several years.

While some pledges made at this summit were considerable, there is still a huge gap between pledges and what is needed to meet the challenge of transitioning to zero carbon global economy and staying within the global carbon budget to limit global warming to the agreed 2 degrees Celsius temperature rise. This was articulated by Nelson Mandela’s widow, Graça Machel, who asked: Are pledges enough to avoid the climate change precipice?

One of the promises that came out of Copenhagen in 2009 was that a Green Climate Fund would be established with a $100 billion in annual funding by 2020 to help the least developed and developing nations to mitigate their emissions as they develop and also help them to adapt to the extreme weather and rising seas and temperatures that are already occurring. Despite the summit hearing $2.5 billion in new pledges for this fund, Oxfam says there is still a large funding gap to the target of $15 billion, the amount necessary to start funding programs. Many western developed countries like Australia, Canada and the US are still to step up and pledge finance to this fund.

All of this amounts to Australia being shown to be a ‘leaner’ not a ‘lifter’ on the global stage of climate action. We are already being diplomatically and politically sidelined in the global debate, and that will eventually flow through to our economic and trade relationships.

Tens of thousands of Australians marched and rallied for climate action on the Sunday before the UN Climate Summit. Melbourne had 30,000 people in the streets, with protests in Adelaide, Perth, Sydney and Brisbane and many regional locations. Internationally there were over 2700 events in 160 countries with 40,000 climate marchers in London and 400,000 in New York City. Public concern for substantial action has reached a tipping point.

President Barack Obama warned in his summit speech that, “one issue that will define the contours of this century more dramatically than any other, and that is the urgent and growing threat of a changing climate”. Australia and Tony Abbott’s Government would do well to heed his words as Obama also warned that “nobody gets a pass” on this issue.