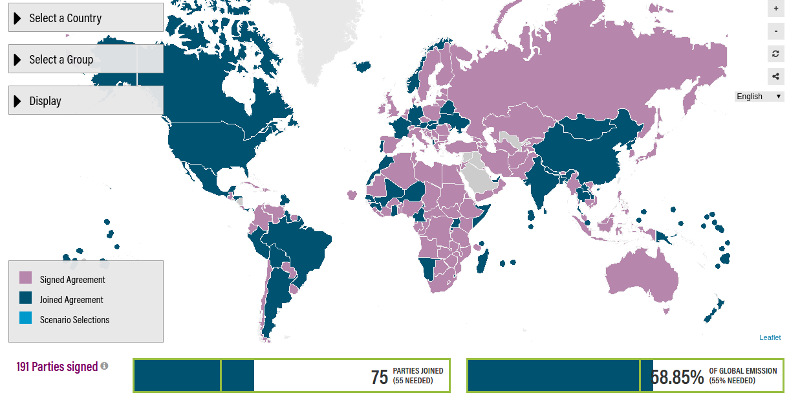 This year’s annual United Nations climate conference is meeting in Marrakech from November 7-18. Our Nofibs reporter John Englart will be attending as an NGO Observer for Climate Action Moreland/CANA.

An international milestone was passed this week with Canada, the European Union, India and even New Zealand ratifying the Paris Agreement. The agreement was negotiated in December 2015 at the United Nations Climate conference in Paris COP21.

The significance of this is that the two thresholds set for the agreement coming into effect – ratification by at least 55 nations and 55 percent of greenhouse gas emissions – has now been met. The Agreement enters into force thirty days after both thresholds are passed. The UN has now determined the Paris Agreement goes into effect as 4 November 2016.

When the agreement was negotiated, it was widely assumed, even by the diplomatic community, that it’s rollout and coming into force would not be for a few years with the aim of a 2020 start. This allowed for designing the finer administrative details and rulebook for the agreement.

An international UN agreement coming into effect within a year is a new record. The Kyoto Protocol, in comparison, took some 8 years before the thresholds were met to come into force.

Island nations were among the earliest to lodge their ratification documents.

A pivotal announcement ocurred at the G20 in China in September when Xi Jinping and Barack Obama jointly announced and formally lodged their national ratification documents. The USA and China are the world’s two largest emitters with toal emissions of nearly 38 percent.

As of 7 October, 191 countries have signed the agreement, with 75 countries now having formerly ratified with 58.85 percent of global emissions, according to the World Resources Institute Paris Agreement tracker.

See the World Resources Institute live app below for which countries have committed:

So where does that leave Australia in this process?

Environment Minister Greg Hunt signed Australia onto the Paris Agreement in April 2016, but the Government chose not to prioritise the tabling of the agreement in parliament early this year. Instead, they waited until after the Federal election, with the Agreement tabled in the House of Representatives on 31 August by Foreign Affairs minister Julie Bishop. (See details in my Nofibs article)

The Paris Agreement is now before the Joint Standing Committee on Treaties. Public submissions have been undertaken and hearings held. It is likely that after due consideration this committee will recommend ratification by Australia, but it will take some time yet and is unlikely to return it’s report before 8 November, too late for the Marrakech conference.

The Paris Agreement is a subsidiary agreement to the landmark UN Framework Convention on Climate Change (UNFCCC) which Australia is already a member of. Malcolm Turnbull could have prioritised and fast-tracked the agreement and approved it through an executive or cabinet decision. He chose not to, but instead used the Joint Standing Committee on Treaties route.

Just compare the different will to act between Europe and Australia. The European Ministers and parliament showed what fast-tracking an Agreement really looks like. Ministers met and approved the agreement for European ratification on 30th September. The European parliament met and overwhelmingly voted for ratification on 4 October. Their efforts have resulted in bringing the Paris Agreement into effect in time for the next UN Climate Conference that starts on 7 November.

Here in Australia we were more concerned with blaming solutions. Prime Minister Turnbull and colleagues blamed renewables (The Guardian) for a state-wide blackout in South Australia caused by extreme weather knocking out the transmission system (The Conversation).

Australian ministers issued no media when the Paris Agreement threshold was passed, just silence from the Australian government.

Our slow ratification process means that Australia will only have observer status at the Conference of the Parties (COP) meeting as the first meeting of the Paris Agreement (CMA1).

One UNFCCC document (PDF) explicitly spells out that “the Agreement will enter into force and become legally binding for that Party on the thirtieth day after the deposit of its instrument of ratification.” If Australia wants a seat at the decision making table in Marrakech for CMA1, then our documents of ratification need to be with the UN by 19 October, at the latest.

“For a Party to the Convention to become a Party to the Paris Agreement in time to be able to participate in the first session of the Conference of the Parties serving as the meeting of the Parties to the Paris Agreement (CMA 1), in the event CMA 1 is convened in conjunction with COP 22 in Marrakech, the Party must deposit its instrument of ratification, acceptance, approval or accession with the Depositary by 19 October 2016.”

It’s a tricky international situation. Quick entry into force of the agreement has meant that many countries like Australia won’t have membership when the first CMA1 meeting occurrs and will be considered observers.

“There’s a real procedural issue in theory, because if you don’t ratify the agreement then you don’t have decision-making power,” said Erwin Jackson, deputy CEO of the Climate Institute.

So it will require careful shepherding by Morocco and the UNFCCC secretariat to ensure inclusivity and progress is maintained. The fine details and ‘rulebook’ for the agreement are still being worked upon. There is a discussion of how governance of the Paris Agreement will proceed at Marrakech at the World Resources Institute.

The post 2020 Intended Nationally Determined Contributions (INDCs) will automatically become Nationally Determined Contributions (NDCs). Assessments have already shown there is still a big gap between national climate plans which on a best case scenario will limit warming to 3C this century, and the goals of limiting temperatures to 2C and strive to reach 1.5C. Attention over time is sure to turn to more ambition for these post 2020 climate plans.

Carbon dioxide pollution is a cumulative problem. The more action we take early in reducing emissions reduces the cumulative amount of CO2 in the atmosphere. So COP22 will have a strong focus on ramping up pre-2020 climate action and ambition by both state and non-state actors.

That should speak to Australia and our low 2020 climate target of 5 percent reduction in emissions. But I doubt our present government will listen. There has been silence over our Copenhagen Accord commitments that involve increasing our 2020 climate targets once conditions were met. Those thresholds have now been surpassed.

Here is what President Barack Obama said on 5 October when the Paris Agreement passed both thresholds (Whitehouse.gov):

“Now, the Paris Agreement alone will not solve the climate crisis. Even if we meet every target embodied in the agreement, we’ll only get to part of where we need to go. But make no mistake, this agreement will help delay or avoid some of the worst consequences of climate change. It will help other nations ratchet down their dangerous carbon emissions over time, and set bolder targets as technology advances, all under a strong system of transparency that allows each nation to evaluate the progress of all other nations. And by sending a signal that this is going to be our future — a clean energy future — it opens up the floodgates for businesses, and scientists, and engineers to unleash high-tech, low-carbon investment and innovation at a scale that we’ve never seen before. So this gives us the best possible shot to save the one planet we’ve got. ”

Find more detail on how social media covered Paris Agreement enters into force before #COP22 on my storify:

Marrakech will be important for the details

My feeling is that this will be more a conference for the diplomats and representation at ministerial level, rather than national leaders. The conference will concentrate on the nitty gritty details of the framework put into place last year.

Each day I’ll try to attend the daily Australian civil society briefings, and the daily CAN International meetings. CAN international, with such a broad membership feeding information and intelligence, does have a measure of influence in the negotiations.

The daily CAN meetings discuss the negotiations and determine Fossils of the Day, and any other awards, in a public event presented each evening. These are often picked up as media stories which can influence climate politics and reporting back in the nation being shamed. CAN International also produce on a daily basis a news sheet – ECO – to give to Party delegates containing witty analysis from civil society of the main issues being discussed.

I participated in the decision to give Australia a Fossil of the Day award at COP21 for comments at a side event made by Julie Bishop about coal being sustainable.

As in past conferences, there will be a high level segment commencing Tuesday 15 November and into Wednesday for Heads of State and Government to attend. This will be the chance for national statements to the COP. Intergovernmental and observer organizations will also deliver brief statements at the high level segment on Thursday, 17 November.

The Marrakech climate conference, meeting from 7 to 18 November, will formerly operate as the:

In the provisional agenda there are three mandated discussions that will occur during Marrakech:

The work of the Ad Hoc Working Group on the Paris Agreement (APA) will be important. There are so many finer details in the Paris Agreement still to be fleshed out. This working group started at its first session, held in Bonn, Germany, from 16 to 26 May 2016. Ongoing work includes providing:

You will be able to follow the official public proceedings at the UNFCCC Marrakech Climate Change Conference – November 2016 entry site, including live and archived video of any open sessions and media events.

I will try to bring you news on the negotiations, and Australia’s role in them, as well as reporting on some of the side events and NGO protests that happen in the UN Blue Zone.

So I guess Australia won't be part of the #coalitionofHighAmbition at #cop22 @JulieBishopMP I am still ashamed #auspol https://t.co/iW5OXD2Rka

There might also be some general reports on the Moroccan government programs, such as installing solar panels on the country’s mosques to boost clean energy awareness.(The Guardian) And perhaps sojourns to the Essaouira-Amogdoul wind farm, and the Ouarzazate Noor 1 solar thermal power station (wikipedia), set to become the world’s largest solar thermal power station, when complete.

Update: add link to UNFCCC document that ratification needs to be done by October 19 to participate in decision making at CMA1 at COP22 in Marrakech.