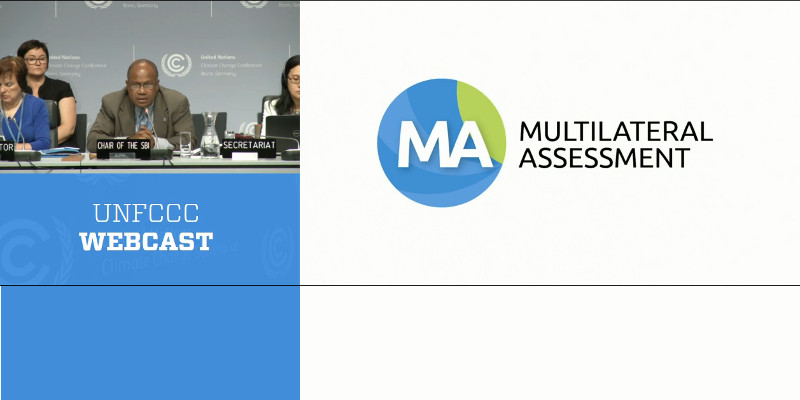 Australia’s climate targets and climate action mechanisms were under the international microscope in Bonn today and found to be very unambitous, with veiled criticism of the inadequacy of Australia’s policies in terms of comparative global action and failure to address fair and equitable global outcomes.

In the leadup to Paris climate conference in December there are a number of preparatory meetings and a multilateral assessment process whereby countries can ask questions of each other’s climate targets and climate action mechanisms. Going into the climate conference in Bonn, Australia had a list of 29 pages of questions and answers, far more than any other nation. There were further questions asked in person at the session, and mostly very inadequate responses by Australia. 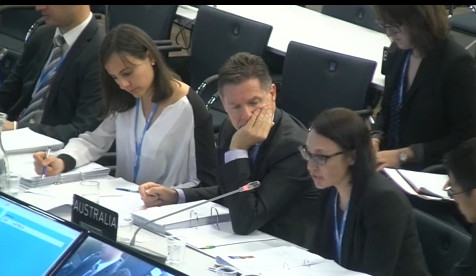 I actually felt sorry for the Australian diplomats led by our UN ambassador Peter Woolcott. They earned their salary today arguing a very unambituous government policy that denigrates Australian diplomacy on climate at the United Nations. You can see their despondency in their body language in the photo.

The USA grilled Australia on the Emissions Reduction Fund (ERF):

“Countries are very interested in knowing whether the Emissions Reduction Fund will result in mitigation comparable total in size to the [Emissions Trading Scheme] in which it replaced,” the US delegation asked. “Can you share with us some additional details [on] how Australia ensures the mitigation results of this policy are sufficiently large to achieve your objectives?”

Peter Woolcott answered that the Abbott government’s first auction had been highly successful. “We are fully convinced as a government that we will meet our 2020 targets,” Mr Woolcott said. “We now have the legislation in place which will allow us to do so.”

“With almost all major economies determined to reach an affective global climate agreement in Paris in December, concern is clearly growing over the Australian Government’s low level of ambition so far, and whether the government has the policies to meet even its existing and woefully inadequate emissions targets,” Dr Bradshaw said.

According to Bradshaw some of the strongest challenges came from China and South Africa, which directly confronted Australia on the fairness of its emissions reductions targets, claiming it demanded more of others than it was willing to deliver. Brazil’s line of questioning failed to extract information on how Australia’s Direct Action approach can achieve substantial economy-wide emissions reductions.

At one point in responding to Fiji, Australia claimed that it fully recognised and appreciated the Pacific island nation’s vulnerability to climate change … before then defending describing its inadequate target of reducing its emissions by 5 per cent by 2020 as “fair and equitable”.

“Reaching a new global climate agreement depends above all on building trust, accountability and a sense of shared commitment between governments,” Dr Bradshaw said. “There is still time for the Australian Government to turn around its steadily worsening reputation in international climate negotiations.

Mostly Australia failed in providing adequate answers to other countries questions. However, one significant concession was made in regard to the controversial Emissions Reduction Fund, when Australia admitted that not all of the emissions reductions purchased so far will be achieved by 2020.

“Coming clean with other countries about what action it is taking will assist Australia’s standing; more robust emissions reductions targets both now and in the future will restore its credibility.” concluded Bradshaw

Erwin Jackson, Deputy CEO of The Climate Institute, was equally scathing about Australia’s disappointing answers. “Disappointing responses to questions from other countries on the domestic policy framework fudged the fact that the government has significantly wound back renewable energy investment, and inflated the impact of its actions to 2020 without providing any estimate of the pollution reductions it will deliver.” he said in a media release.

“Australia failed to clarify why it should do less than other countries like the USA and why it is not currently focused on increasing its currently inadequate 2020 pollution targets in line with the actions of other countries.” Jackson said. “Australia’s lack of ambition and transparency on its domestic policies will only focus greater attention on the government’s targets and policies as other countries push for further answers and actions from the government.”

The Bonn conference is part of the lead up to the Paris climate conference in December. Jackson stressed the importance of transparency and accountability as key trust builders between governments. As Australia is clearly not being forthright with other nations, it is undermining its case for even greater accountability on national actions as part of the Paris outcome.

“Part of a positive outcome in Paris will be an agreement that all nations – developed and developing – are transparent and clear on their actions. Australia risks failing the first hurdle.” said Jackson.

Australia has still to put forward it’s INDC document which outlines its post 2020 climate targets. It is expected Australia will announce its post-2020 pollution reduction target in July.

“Australia has agreed that when it announces its new post-2020 emission targets the government will show the international community how it is a fair contribution to avoiding the 2ºC increase in global temperature. This will be the key benchmark for the new target and test if the government can look beyond a future where our nation remains dependent on outdated polluting technologies,” concluded Jackson.

As I said, 29 pages of questions and answers up to 31 May 2015, quite a few of them quite technical but many are quite straight forward. Read the Questions and Answers PDF or find other documents on the Multilateral assessment process Australia at the UNFCCC site.

You can read other accounts of Australia’s grilling:

#sb42 Multilateral Assessment of developed countries progress towards their targets about to start. 1st up: Australia pic.twitter.com/ydXjx9AyOI

US, China, EU, Brazil and many others all want to know why Australia isn’t doing more about #climatechange No more #lamexcuses #UNFCCC #SB42

Trying to spruit the Direct Action plan as working and now spruiting how good RET is!!!! After trying to kill it! #UNFCCC #SB42

Australia are you trying to filibuster your way through this? We need time for questions! #unfccc #sb42

#Australia's opening presentation all old news, no mention of increasing effort or targets to match our peers #UNFCCC #SB42

US to Australia- How do you calibrate #ERF to achieve adequate mitigation? Will results be comparable to the carbon price you repealed?#sb42

US in Bonn #SB42 asks Australia how emissions reductions from Aus govt direct action compares with the ETS that it removed.

Aus: "We are fully convinced as a government that we will meet out targets" Also convinced "#coal is good for humanity" #UNFCCC #SB42

Aust: "Australia is currently reviewing international targets" Translation: We would love to dump them #SB42 #UNFCCC

Aus just had the audacity to say it fully appreciates and recognises Fiji's vulnerability to #climatechange Really? #unfccc #sb42

Aust: "Results of first auction have been extremely promising" Yeah. Budget blown already on not much http://t.co/hjSMCUmZmW #UNFCCC #SB42

China #SB42 says AUS is impt in this process, is concerned Aus top end target is lower than what it is asking of others, no #lameexcuses

A telling observation — China notes that Australia is receiving the most questions in the MA process. #ADP2015 #SB42 pic.twitter.com/WCr0jKS8Uk

ROK: "How did companies respond to ERF?" Love it, as they get paid by taxpayers, not penalised 4 polluting. Socialised losses baby #SB42

Aust: "We got 36 questions on notice. There is substantial interest" This is not a positive. Ppl don't think we have awesome policies #SB42

Aust: "We're very earnest about how we go about setting our targets" Because we are sincere about intensely protecting #coal barons #SB42

Aust: "We're improving small scale energy efficiency! That will contribute to a reduction of our ballooning coal-fired emissions" #SB42

Australia tells UN that businesses have responded positively to the ERF, which pays them taxpayers' money to pollute less. #surprise #SB42

Aust: "The fund is $2.55 billion to reduce emissions" Let's all just quietly forget that it was $3.8 billion pre-election. #SB42

US: "You've indicated your international targets are under review, is it the case the unconditional 2020 target is under review?" #SB42

Aust: "I can't go into any more detail or elaborate on the timing [of target]. It remains on the table" #SB42 #UNFCCC #Laggard #Climate

Aus confirming higher conditional 2020 targets are on the table, but not focus of current review.#SB42 So then when?? @GregHuntMP

China and South Africa have directly confronted Australia on the fairness of its emissions reductions targets https://t.co/tao53rYyr2 #SB42

John Englart (@takvera) and his teenage daughter (@climateteen) will be travelling to Paris to report on the United Nations COP21 climate talks from November 30 to December 12 (including for Nofibs), and in particular what role Australia plays in those negotiations. Over $1400 was successfully raised from 20 backers through crowdfunding to help meet their living costs while covering the climate talks.