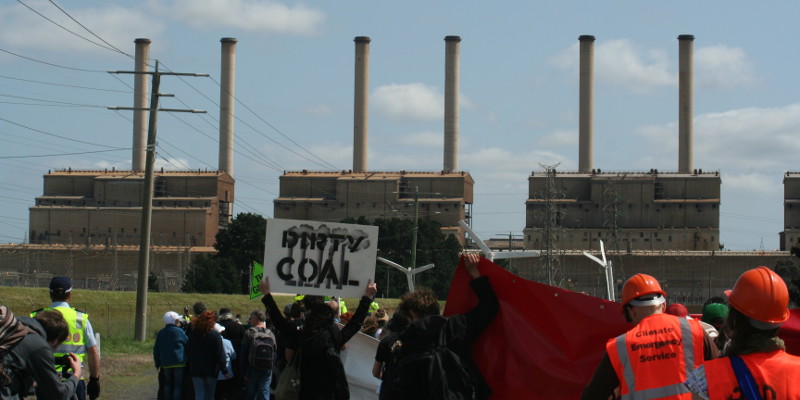 Largest drop in Australia’s emissions with carbon tax, new figures from the National Greenhouse Gas Inventory reveal, as emissions from electricity generation start to trend up.

The Abbott Government wants to bury this story, hence it’s release right before Christmas. Carbon tax abolition was, after all, Prime Minister Tony Abbott’s greatest achievement as Minister for Women, as we were told.

Despite the timing, there was mainstream coverage by the Sydney Morning Herald and in the Guardian, but the details are easily forgotten in the pre-christmas activity and celebrations by most people.

Reading the Latest data in the National Greenhouse Gas Inventory indicates that in the 2013-2014 year to June 2014 (when the carbon tax was in force) greenhouse gas emissions for the energy – electricity sector were reduced by 4 per cent compared to 2012-2013. The rate of reduction had also accelerated from the previous year.

Overall, from all sectors annual emissions reduced by 1.4 per cent.

This data covers the period up to June 2014 when the carbon pricing scheme, or the carbon tax, was in force and demonstrates it had actually accelerated it’s impact in driving down emissions in it’s second year of operation, particularly in electricity generation which is responsible for about a third of Australia’s total emissions.

Agriculture, Transport and industrial processes also saw a drop in emissions in 2013-2014, while fugitive emissions from mining and stationary energy excluding electricity increased. 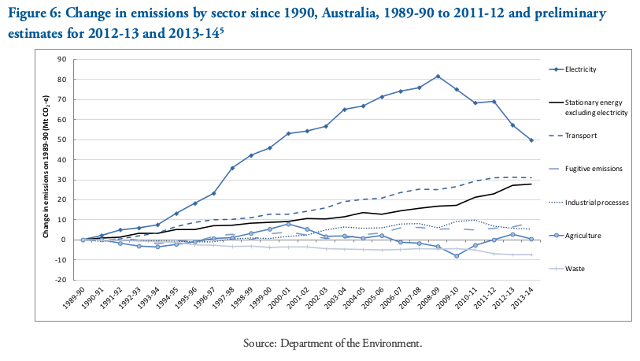 Emissions from Land Use, Land Use Change and Forestry (LULUCF)

The preliminary land use accounting of emissions from Deforestation, Afforestation and reforestation, done for the Kyoto Protocol standards, also show a very concerning recent trend.

Similarly the rate of carbon sequestration (carbon sink) of emissions due to afforestation and reforestation reduced by 13.8 per cent from minus 19.4 Mt CO2-e to minus 16.8 Mt CO2-e. This decline was attributed to “post 1990 plantation estate reaching harvestable age and changes in international accounting rules from 1 January 2013.”

We do need to lock up our old growth native forests, some of the most carbon intense in the world, from logging to enhance carbon sequestration and declare such threatened ecosystems as the Alpine Mountain Ash forests of the central Victorian Highlinds as the Great Forest National Park.

Since 1990 Australia’s population has grown by 37.8 per cent from 17.1 million to 23.5 million people in June 2014. Although gross emissions have increased over the period, on a per capita and per dollar of gross domestic product (GDP) the ratio of emissions per person and per dollar have been declining.

So what has been happening with emissions since July 2014?

The Pitt and Sherry CEDEX report for December says “emissions from electricity use have turned sharply upwards since June 2014. What was a slight rise in July-August, which was the largest 2 month increase since 2006, has now been clearly confirmed as a trend with this being attributed at least partly to the removal of the carbon tax.

In it’s review of the Carbon Farming Initiative it found that the Government’s Emission Reduction Fund (ERF) made some important improvements for carbon farming, but it also identified expanded risks. The Authority concluded:

Based on its current configuration and funding, the Authority considers that the Emissions Reduction Fund is unlikely to deliver sufficient emissions reductions to reach Australia’s minimum 2020 target of 5 per cent below 2000 levels. A range of complementary actions will be required, now and beyond 2020.

For it’s review of the Renewable Energy Target the Climate Change Authority recommended maintaining the present target of 41,000 GWh, but due to the decline in investor confidence and projected electricity demand, the government should “defer the 2020 target for the LRET by, say, up to three years; and extend the scheme as a whole by at least the same amount of time.”

It also recommnded that a RET target should be increased and extended for post 2020 to continue for some time the penetration of renewable technologies in electricity generation to meet the challenges of climate change.

In March 2014 the Climate Change Authority handed down a report recommending that the international conditions had been met to lift our emission reduction target to 19 per cent on 2000 levels by 2020.

The Climate Change Authority isn’t the only body to argue that with present climate policy settings Australia may not be able to achieve even the small emission reducation target of 5 per cent on 2000 levels by 2020. Climate Analytics and Ecofys published a Climate Action Tracker Policy Brief on 11 December at the Lima COP20 climate negotiations titled: Australia’s Emmissions set to soar by 2020.

Australia negotiated a special clause under the Kyoto Protocol in 1997 for land use and forestry emissions based upon 1990 levels. The clause was even nicknamed the ‘Australian clause’ for it’s special consideration it gave to Australia based on rates of emissions in 1990 that were no longer valid when we signed the accord in 2007.

“The Climate Action Tracker has evaluated the most recent policy developments in Australia and how they impact on the future growth of greenhouse gas emissions, in particular from fossil fuel and industrial sources (“energy and industry GHG emissions”). We have compared Australia’s likely future per-capita emissions with the USA.

The CAT shows for the first time that under the Kyoto Protocol’s second commitment period rules, Australia is likely to be allowed to increase its emissions by up to 47-59{17ac88c265afb328fa89088ab635a2a63864fdefdd7caa0964376053e8ea14b3} over 1990 levels of energy and industry GHGs in 2020, so much so that Australia would barely need to do anything. This allowance under the Kyoto Protocol is close to the range of CAT current policy projections for Australia, taking into account the repeal of the climate legislation and the Abbott Government’s Direct Action programme for 2020.

The report goes into some detail on allowed emissions under the Kyoto protocol and the special clause that allows Australia, uniquely, to add deforestation emissions to its energy and industry GHG emissions in 1990 to calculate its allowed emissions during a Kyoto commitment period.

The report then compared Australia’s per capita Greenhouse Gas Emissions with the USA to give an idea of relative climate policy action and effectiveness between the two economies that also takes into account population growth. Remember, to limit warming below 2 degrees C, per capita emissions need to approach zero around 2050, hence will need begin a substantial decline.

The US and Australia started the 1990s with similar per-capita emissions. By 2000 US per capita emissions had started to decline, with this accelerating in the last ten years, a trend that would continue under the US Copenhagen pledge of a 17{17ac88c265afb328fa89088ab635a2a63864fdefdd7caa0964376053e8ea14b3} reduction from 2005 levels. The full package of measures implemented and proposed by the US Administration, including additional measures would continue this trend.

If Australia were to fulfil its Copenhagen pledge then its rate of reduction of per capita emissions would parallel the USA through at least 2020. As we have shown, however, this is now very unlikely and with emissions instead set to increase significantly, per capita emissions appear likely to increase. This would indicate a substantial slowdown of effort by Australia compared to the US on the timeframe of the rest of this decade. 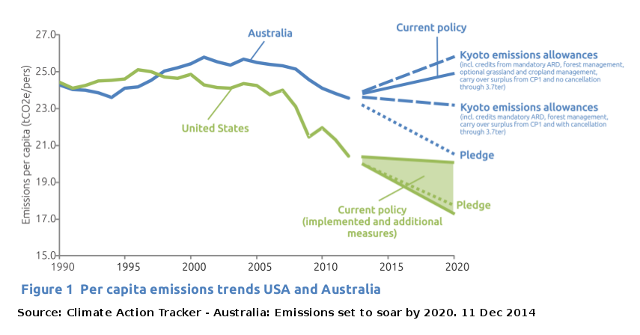 President Obama in his speech to university students at the University of Queensland at the G20 in November 2014 said: “The United States and Australia have a lot in common and one of the things we have in common is we produce a lot of carbon, Historically we have not been the most energy efficient of nations, which means we’ve got to step up.”

Australia has gone backwards and stepped down

Foreign Affairs Minister Julie Bishop demonstrated for the world to see at the UN Climate Summit in New York that Australia is a climate leaner not a lifter.

Although in Lima at COP20 Foreign Affairs Minister Julie Bishop pledged $200 million funding to the Green Climate Fund, this was a token measure with Treasurer Joe Hockey slashing Australia’s Foreign Aid budget by $3.7 billion in the Midyear Economic Forecast, the Biggest aid cuts ever produce our least generous aid budget ever.

Australia won 5 out of 10 Fossil of the day awards and the Colossal fossil award at the Lima climate negotiations.

Senator Christine Milne, the leader of the Australian Greens was quoted in the Guardian on the National Greenhouse Gas Inventory:

“These figures demonstrate to the rest of the world just how effective our carbon price was at bringing down pollution. This is the biggest ever drop recorded and the price made it happen.

“The Abbott government will go down in history as taking the biggest backward step in tackling global warming Australia has ever seen. As well as being terrible for the climate, it is a tragedy for Australia in terms of lost investment and jobs in the clean industries of the future.”