Talking to Keith Douglas is a lot like trying to talk to a ping-pong ball in a Lotto machine – he talks fast and ranges wide.

I met the Australian Voice Party candidate at what has become the No Fibs office in Forde – the nearby Zarraffa’s Coffee outlet (one of many, given the company’s Australian headquarters are up the road).

According to Douglas, who grew up on a farm in the electorate and lives nearby on the Gold Coast, the party’s thousandth registered member is just about to gallop over the horizon.

Douglas said the party would have preferred an October-November election, in order to give him and his fellow candidates time to prepare. 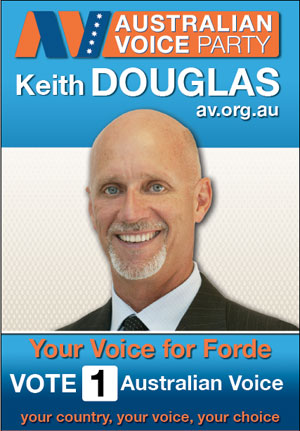 As it is, they hit the ground running.

“I thought I could campaign for Forde and run the election campaigns for 12 other Australian Voice candidates,” he said with a grin.

“In reality I’m just flying the flag here in Forde. I’ve had no time whatsoever to run my own campaign.”

Douglas, a key campaigner in the fight to overturn recent marine park sanctuaries established in Queensland, was originally a Katter Party candidate.

He walked away from Katter because of ‘internal disarray’. And besides, Katter wouldn’t listen to his plans for the establishment of a ‘national federal development bank’.

“Bob talks the talk, but he doesn’t actually do anything,” said Douglas.

“I like him personally, but I’m in this for real outcomes.

“I had big plans for the Katter Party, but there was no structure to give those plans a hearing.”

While flying the Australian Voice flag in Forde, Douglas has been working around the clock writing policies, designing artwork, building websites and organising campaigns and candidates.

His experience creating and implementing commercial software programs for Citibank, back when computers cost about as much as a modest house, have set him in good stead for the practicalities of the campaign.

As has his previous shot at the Senate, in 2010 for the Australian Fishing and Lifestyle Party.

“I’d be in the Senate now if the Liberal Party had stuck to their preference deal,” he said.

Now, I live in a nation where, for all its faults, ‘the system’ and its elected custodians have delivered a standard of living and community engagement that has been the envy of the world for over a century. It’s not easy to organise human beings into peaceful society that allows also for individual liberty. So such talk tends to make me nervous. I quizzed him closely.

“The costs are not sustainable for going forward,” he said.

“Very few people in politics have a corporate background.”

I asked how things would change for the people of Forde if he was elected.

“If we’re successful as a political group, then we’ll have more efficient government,” he said.

“Katter’s got a big hat and one seat. We think there’s space available (in the parliament) and we intend to occupy that space.”

I point out that we live in a democracy, not a dictatorship.

Yes, I thought, you can.

“To get good outcomes means people have to accept my ideas,” he said.

“We intend to be the coalition partner of whoever happens to be the government of the day.

“Our policy positions fall between Labor and Liberal, so we can comfortably govern with either party to achieve common sense outcomes and good commercial ways of doing things.”

Douglas is clipped in his persona and, like the Katter candidate in Forde Paul Hunter, strikes me as a disciplined man.

Hunter spent 22 years in the army. I asked Douglas, who will be 60 on Christmas Day, if he also has an army background.

“I did ballet as a kid, then boxing and then Shao Lin kung fu.”

Like many Forde candidates, Douglas is standing on what is probably the most common political mantra of the 2013 campaign nationwide: ‘we’re here to represent the will of the people.”

I asked how he would determine whose will to represent.

“Through print and electronic polls,” he said. “Majority rule.”

I asked if there was a case for electoral leadership, on such matters as the death penalty, for example, or climate change.

“The Australian Voice Party is showing leadership by taking on the system for a better way,” he sad.

“We’re here to promote and develop that better way. Our success or failure is up to the people.

Information about Australian Voice Party policies is available on their website.