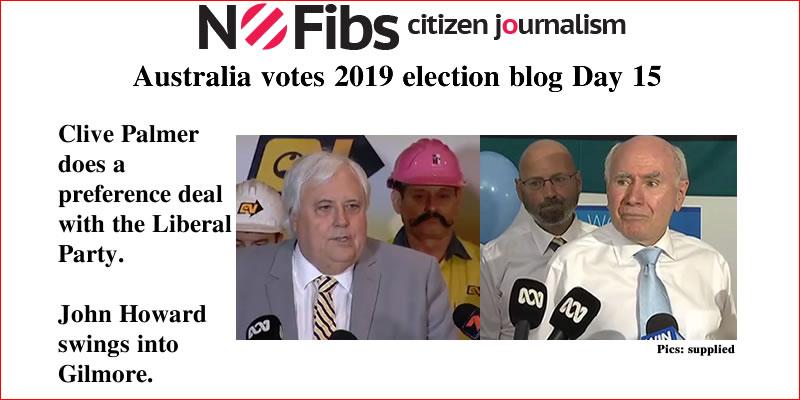 The deal between Clive Palmer and the Liberal Party is done

The deal between Clive Palmer and the Liberal Party is done

One would have thought that the Liberal Party would want nothing to do with a guy that once worked alongside Queensland Premier Joh Bjelke-Petersen, fell asleep in the federal House of Representatives chamber and lost his nickel refinery to administrators. However, this is Queensland, it’s Clive Palmer we’re talking about and pineapple politics is complicated.

Mr Palmer has been in and out of federal court in Brisbane over his 2016 Queensland Nickel refinery collapse. He has repeatedly told the judge that he has no idea where his company director, his nephew Clive Mensink is.

Yet here we are again. Jane Norman has today confirmed from the Liberal Party camp that a preference swap has been finalised with Mr Palmer’s United Australia Party. The UAP is set to make a formal announcement on Monday.

We’ve been here before, of course. The precursor to UAP was Palmer United Party (PUP). It was created after Mr Palmer fell out with Queensland Premier Campbell Newman in 2012 and triggered his resignation from the Liberal National Party (LNP).

Mr Palmer had been their biggest donor. What followed was a bitter battle involving accusations, lawsuits and political revenge that spilled out of Queensland politics and into the federal arena.

As fast as it seemed to rise, PUP disintegrated quickly as its state and federal parliamentarians either quit the party or lost their seats at subsequent elections. By 2016, notice of PUP deregistration had been gazetted.

A surprise re-entry to politics in 2018, Mr Palmer grabbed the media spotlight with the new UAP. A positive Newspoll this week had the media giddy again with Mr Palmer.

Especially in Queensland, the election story of the alternative conservative party plays out well in newspapers and on the nightly news. Mr Palmer’s advertising dollars to the commercial networks and papers would provide extra incentive to media bosses. At last report he’d spent $30 million in seven months on marketing the UAP.

The Newspoll of four seats released this week has UAP at five per cent in Deakin, 7pc in Lindsay, 8pc in Pearce and 14pc in Herbert. It also suggested that support for Pauline Hanson’s One Nation (PHON) party had fallen away. Instantaneous speculation on preference deals began and Prime Minister Scott Morrison was peppered with questions in Adelaide on Tuesday.

Despite the PM once likening Mr Palmer to a “circus sideshow” and Mr Palmer labelling Mr Morrison, “Commandant Himmler”‘, all now appears forgotten. The PM laughed off the comments and declared he would not be “held back” by them.

Last week, Mr Palmer announced he would be paying outstanding entitlements to Queensland Nickel workers. He had long been insisting that he didn’t “owe anyone, anything”. However, there was no mention of repaying the company’s creditors. Also, no confirmation if the $66.86 million would be repaid to the Commonwealth’s Fair Entitlements Guarantee which was used to cover some of the workers entitlements.

At the 2017 Queensland state election, despite continual media speculation that PHON could return to the Queensland Parliament in great numbers, very little happened. The party picked up one seat from Labor and delivered a chunk of conservative votes to Labor through their preferencing decisions.

Nothing can be ruled in or out with UAP at this federal election. Queensland politics is volatile but never boring. It’s well and truly rattling around inside Scott Morrison’s Canberra bubble.

Former Prime Minister John Howard this week arrived in the most marginal of the New South Wales electorates, Gilmore. Accompanied by Senator Arthur Sinodinos and Liberal Party candidate Warren Mundine, Mr Howard was asked to explain why the outgoing Liberal member, Ann Sudmalis, had refused to declare her support for Mr Mundine. Mr Howard declared it was a “personal decision” and he wasn’t there to condemn her.

“I’m just encouraging people to vote for Warren [Mundine] ahead of anyone else,” he said avoiding the historical controversy surrounding Ms Sudmalis’s ousting by the local Liberal Party branch.

Asked who he thought would win the seat, he trumpeted that it was likely to be the Liberal Party.

“I think the Liberal Party will win Gilmore but I’m not taking it lightly.”

In a previous political life, Mr Mundine had been a Labor Party president. Standing next to him, Mr Howard urged Gilmore to vote for the National Party candidate if they wanted to but place Mr Mundine second on the ballot paper.

“I can understand some people because of previous attitudes or whatever might want to vote for the National Party, well do so but just make sure you give your preference to Warren.”

Even though Ms Sudmalis is a Liberal Party member, she recently declared her support for the National Party candidate, Katrina Hodgkinson. Ms Hodgkinson is a former NSW state government minister and currently a lobbyist with firm Barton Deakin. She is currently on leave whilst campaigning.

Lisa Martin reported, “No there is no conflict of interest. I am not a lobbyist and I do not undertake lobbying activities,” she said in an email to the Guardian from her Barton Deakin email address. Nationals’ Gilmore candidate Katrina Hodgkinson still on lobbying firm’s payroll.

Despite having the public backing of Prime Minister Scott Morrison, Ms Sudmalis was replaced by her branch before the election was called. Grant Schultz had been chosen as the new candidate. However, Mr Morrison and the NSW Liberal Party executive refused to accept the choice.

Not living in the electorate at the time but with family connections to the area, Mr Mundine was suddenly parachuted in. Mr Schultz promptly resigned from the party and declared himself an Independent candidate. Hoping to quell the drama, a deeply upset Sudmalis was dispatched by the government on a three-month delegation to the United Nations.

However, more drama began in the final parliamentary sitting week of 2018 when independent Prof Kerryn Phelps took the seat of Wentworth after former prime minister Malcolm Turnbull was ousted.

Citing bullying from colleagues and disappointment about the deposing of Mr Turnbull, another Liberal MP, Julia Banks, quit the party and moved onto the crossbench as an Independent. With the government numbers declining, Home Affairs Minister Peter Dutton reported in an arm injury and that he was out of contention for two weeks.

With low government numbers, the Liberal Party strategists began to worry that Labor might try to bring on a no-confidence motion. They decided to fund the urgent return of Ann Sudmalis. Should Labor bring on that vote, Ms Sudmalis would spring out to save the day.

The plan was working up until she was spotted in an adjacent room by Labor members on their way to the chamber. The whips were informed.

Jane Norman reported, “She had flown in under the cover of darkness and locked herself in her parliamentary office, where for hours on end she watched the live feed of the House of Representatives and waited, in case the Coalition needed to use her as a secret weapon.” Liberal Party flew backbencher Ann Sudmalis home from New York amid fears of losing a vote.

On a margin of 0.7pc, there are a total of six candidates competing for Gilmore. It has only ever been held once by Labor in 1993.