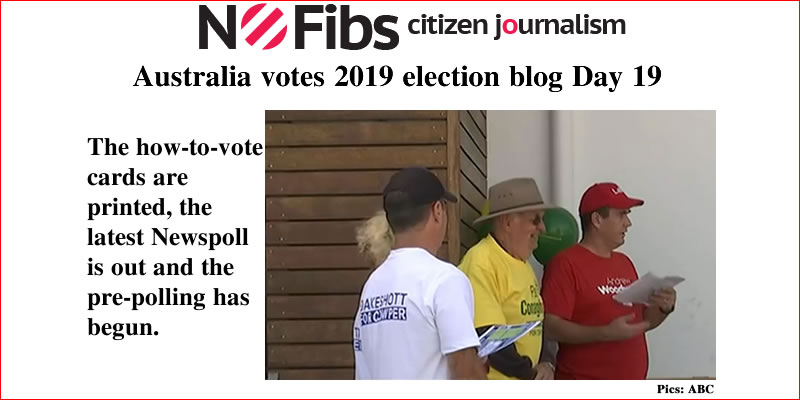 Independent campaign in Farrer heats up after pastoralist backing

Independent campaign in Farrer heats up after pastoralist backing

Wayne Jansson has been following the activity in the seat of Farrer where a rural pastoralist, Rob McBride, has thrown his support behind the Independent candidate, Kevin Mack. Fiery Farrer pastoralist blasts Sussan Ley, backs indie Mack Farrer.

Minister for Education, Dan Tehan, has told the ABC that Labor’s childcare policy will lead to communism.

“This is a fast track to a socialist if not communist economy,” he said about the opposition’s intention to provide free childcare to low-income households where the family income is $69,000 or less. Government labels Labor childcare plan ‘communism’.

Pre-polling centres have opened and the how-to-vote cards are being handed out.

Gemma Veness spoke with ABC election analyst, Antony Green, about how-to-vote cards and preference flows. Also, the rounding in the latest Newspoll which gave Labor a fall of one point to 51 percent and the Coalition a rise to 49pc.

Nevertheless, for the rest of the campaign the Labor Party will continually point to the preference-swap deal between the Coalition and United Australia Party and Coalition and Pauline Hanson’s One Nation party.