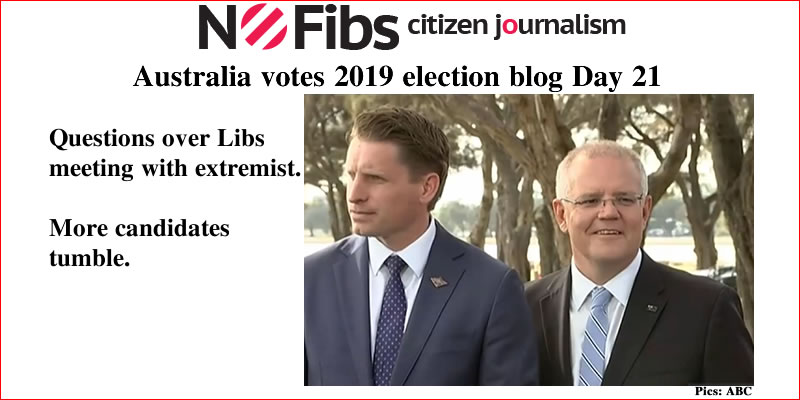 Not much change in Coalition immigration policy from 2018 numbers

No deal with The Greens, says Labor

Liberal Party candidates dumped in Wills and in Isaacs

A story that initiated on social media and made the leap into the mainstream media has been both denied and confirmed by two of the Liberal Party’s West Australian MPs.

In September 2018, Home Affairs Minister Peter Dutton called on his department to “consider and accept” persecuted white South African farmers. Peter Dutton calls on department to ‘consider and accept’ South African farmers: report. It sparked rallies in support of the plan around the country. One of those was held in Perth and headlined by Ian Goodenough and Andrew Hastie.

Mr Erikson had also been involved in a racist, verbal confrontation with Labor’s Sam Dastyari in a Melbourne pub in 2017.

More recently, a post by Mr Erikson emerged on social media in which he claimed Mr Goodenough and Mr Hastie had paid him to stalk Mr Dastyari.

Yesterday, a journalist asked Mr Hastie if he had ever met Mr Erikson but he refused to answer.

Shadow Attorney-General, Mark Dreyfus, today said there was more explanation needed from the pair as to what exactly was discussed and why they were at the rally.

Not much change in Coalition immigration policy from the 2018 numbers

Australia needs population growth for economic growth but the birth rate of 300,000 a year isn’t enough. Immigration has featured strongly as an issue since the 20th century but the Lowy Institute has recently found that over half of Australians prefer a lower intake.

The Coalition policy is to freeze refugee numbers and to cap the immigration intake at 163,000. However, this doesn’t change very much as the intake in 2018 was 160,000.

No deal with The Greens, says Labor

Greens leader, Richard Di Natale, has called for a partnership with Labor on climate policy of the order that was in place during Julia Gillard’s government.

“I say to Labor, don’t follow the take-it-or-leave-it approach of Kevin Rudd in 2009 but let us work together, just like we did with Julia Gillard in 2011, to deliver a climate policy that gives future generations a chance,” he said in a media release prior to his appearance at the National Press Club.

However, Bill Shorten promptly ruled out an such working arrangement.

Independent candidate for Indi, Helen Haines, will make history as the first Independent to succeed another Independent if she is successful in her campaign this month. Incumbent Cathy McGowan has retired from politics and is helping the Voices for Indi movement campaign for Ms Haines.

Lucy Barbour reported, “In Ms McGowan’s retirement, Voices for Indi anointed Ms Haines, a nurse and midwife, to try to keep the seat independent by fighting a tough three-cornered contest with the Liberals and Nationals. If she wins, she’ll make history as the first independent to succeed another in a federal seat.” Federal election 2019 could see independents make history, with Indi as the test case.

One of Clive Palmer’s candidates for the seat of Nicholls in Victoria has attempted to get favourable coverage from the local newspaper in return for an increase share of United Australia Party’s advertising budget. Stewart Hine committed to the ABC he had been responsible for sending offer in an email to the Shepparton News but denied it was a “cash-for-comment” offer.

Nino Bucci and Jeremy Story Carter reported, “In an email seen by the ABC, Mr Palmer’s candidate for the Victorian seat of Nicholls, Stewart Hine, approached the Shepparton News suggesting supportive coverage would give him ‘leverage’ in discussions with the UAP about buying advertising space with the paper.” Clive Palmer candidate Stewart Hine tries to trade ad spend for favourable coverage.

In a sign of how much money Mr Palmer is throwing at the election, a target of $70 million was recently discussed. Mr Palmer also declared to Deborah Knight on Monday that he had “$4,000 million” and told her he didn’t give a stuff what her personal opinion was.

The Liberal Party’s candidate for Isaacs, Jeremy Hearn, is set to be disendorsed after a conspiracy-laden anti-Muslim rant resurfaced.

Patricia Karvelas spoke to Simon Birmingham about the vetting issues within the Liberal Party.