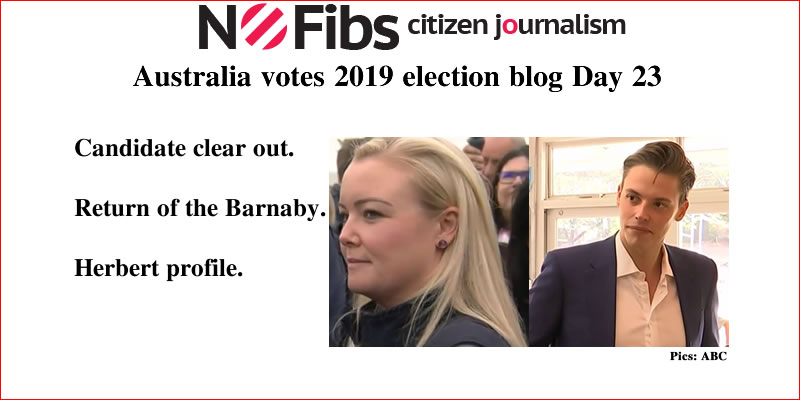 Extremist links to the Queensland LNP

Labor’s plan to fix the NDIS

Return of the Barnaby

Will the real Barnaby Joyce please show up

Extremist links to the Queensland LNP

Labor’s plan to fix the NDIS

Clive Palmer says comments made on Facebook by his Bean candidate, Tony Hanley, are unacceptable and he’ll take the matter up with him.

Amongst all the excitement, the Queensland environment department has sent back Adani’s plan for the management of the black-throated finch because it doesn’t meet the requirements.

Peter Hannam reported, “John Alexander, the sitting Liberal MP for Bennelong, has sought to downplay his comments that Australia’s climate policy priority in the Pacific should be helping people ‘move to higher ground’ rather than curbing coal. Mr Alexander told a forum at the Epping Uniting Church on Monday Fiji’s Prime Minister Frank Bainimarama recently asked Australia, ‘please stop burning coal, you know the water level’s just coming up and it’s threatening our communities’, according to audio obtained by the Herald and The Age.” ‘Move to higher ground’: Liberal MP’s climate advice to Fijians.

It’s Australia’s most marginal seat. Just 37 votes gave victory to Labor in 2016 in the seat of Herbert.

Amy Remeikis took a trip to Townsville, “It’s been more than 1000 days and Townsville still hasn’t made up its mind. I don’t know,” Charlie Murison says when asked who he’ll vote for. “None of them?” At the mercy of minors: Labor and LNP wrestle for hyper-marginal Herbert.

Coal mining and protecting The Great Barrier Reef are two concerns in Townsville.

Labor’s Cathy O’Toole holds the seat on a margin of 0.02 percent.

A journalist has asked Prime Minister Scott Morrison if a Labor government would mean a change to the recipe of vegemite.

Return of the Barnaby

According to the Qld LNP MP for Capricornia, Michelle Landry, Barnaby Joyce could return to the top Nationals job in a reorganised party room in the next term of government.

Michael Koziol reported that Ms Landry said, “That’s up to the party room and the party room will be totally different this time around. We had a lot of people resigning and hopefully a lot of new ones coming in.” Barnaby Joyce could return as Nationals leader in new-look party room, says MP Michelle Landry.

Will the real Barnaby Joyce please show up

Robyn McAskill reports, “When federal Member for New England Barnaby Joyce cheated on his wife Natalie, many of his supporters maintained that it was a personal matter and not newsworthy. If the only issue with Barnaby was that he had an extramarital affair, I would agree — people make mistakes — but the enduring anger isn’t simply about the affair. It’s about the breach of voter trust, mismanagement, ignoring the law, and the promotion of mining ahead of rural community interests.” Will the real Barnaby Joyce please show up.

The vetting process of political parties appears to be less than adequate with another Liberal Party candidate and another Labor one resigning. Once again, it’s the devil’s work in Facebook that brought them down.

Liberal Party candidate for the Tasmanian seat of Lyons, Jessica Whelan, has resigned from the party. There was considerable confusion overnight in trying to establish with the Australian Federal Police (AFP) if Ms Whelan had referred allegations that her Facebook posts had been “doctored” as Prime Minister Scott Morrison had inferred yesterday afternoon.

Samantha Maiden reported, “The New Daily confirmed with AFP sources that as of 9pm on Thursday there was no referral to the relevant line area of the posts by Ms Whelan.” Liberal candidate dumped over anti-Muslim online posts.

However, by this morning Ms Whelan had offered her resignation. The PM stepped up for a press conference to confirm that one of the posts was still being referred to the AFP but other posts that surfaced last night were unacceptable.

Opposition leader Bill Shorten also had a bad morning with Melbourne candidate, Luke Creasey. In an early morning press conference, Mr Shorten said he had accepted Mr Creasey’s apology for sharing a rape joke. However, Mr Shorten reappeared a short time later declaring further posts had been revealed and he was seeking a briefing from the Victorian Labor secretary.

Not long after, Mr Creasey released a statement saying he had resigned.

Rosemary Bolger has a list of the candidate wreckage so far. Election hall of shame: How stuff ups and social media slips cost election candidates.

Election analyst Antony Green has been peppered with questions about what happens to disendorsed or resigned candidates.