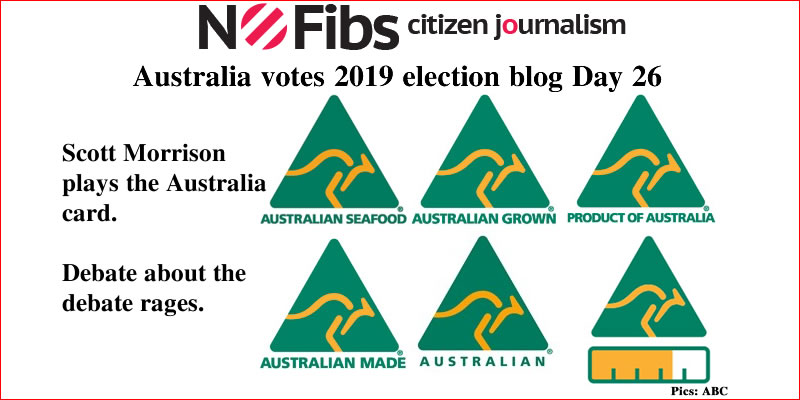 The debate about the debate rages

Clive could spoil the election party

The debate about the debate rages

Both leaders appear to have agreed to a third debate on Wednesday night at the National Press Club. Labor’s Anthony Albanese thinks Scott Morrison should also go on QandA.

Clive could spoil the election party

Clive Palmer has launched a bid in the High Court to prevent the Australian Electoral Commission from publishing preference results on election night until all the poll booths are closed. A victory would mean the result may not be known until after 9:30pm when booths in the Cocos Islands.

The adman prime minister is pledging $5m for a revamp of the buy Australian campaign.

Sarah Martin reported, “Scott Morrison will pledge a boost to the manufacturing sector on Monday promising a new “Australian Made” campaign for key export markets and a fund to help business invest in new technologies.” Coalition earmarks $5m to reboot Australian Made campaign.

Scott Morrison has also agreed to a third debate and was asked if he would be getting the gloves off this time.