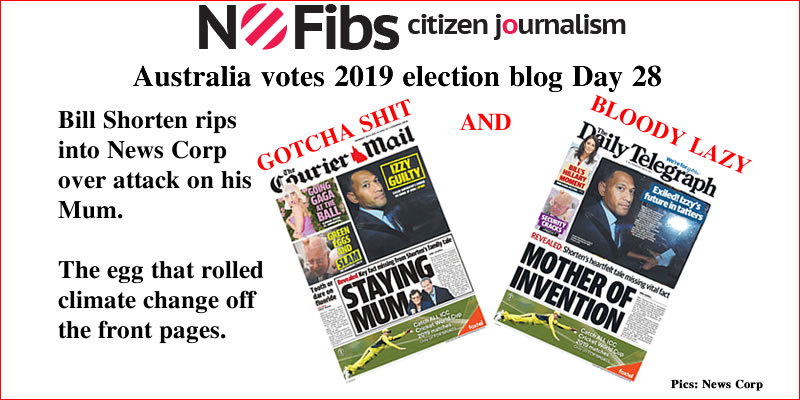 All care, no responsibility for the media’s message

The egg that rolled climate change off the front pages

All care, no responsibility for the media’s message

Robyn McAskill reports from New England, “New England voters are frequently ridiculed and rebuked for electing Barnaby Joyce. Spend enough time on social media and you’ll see it littered with negative comments about New England voters, questioning our intelligence and our rusted-on support.” All care, no responsibility for the media’s message.

The egg that rolled climate change off the front pages

The egging of Prime Minister Scott Morrison yesterday overshadowed the United Nations’ latest climate report which warned of the extinction of one million species across the planet. As the 24-year-old woman was being charged for common assault and cannabis possession, the UN story began to fade from digital media home pages. Stephen Long noticed it going with a Tweet at 8:23PM.

ABC’s environment journalist Michael Slezak’s report for the 7pm news aired last night and gave the grim Australian scientific community response to the UN report. Destruction of biodiversity is increasing due to human overpopulation, urbanisation, pollution, unsustainable food production and climate change. Notable for her lack of response to the ABC was environment minister Melissa Price.

Over on Nine News Queensland, Peter Dutton was declaring his belief in climate change as he boasted about his coup which deposed Malcolm Turnbull to save the government for annihilation.

It was in stark contrast to the 2015 joke about Kiribati and water lapping at their doors that was captured on a boom microphone with Tony Abbott and Scott Morrison.

Peter Hannam reported today, “Australians rate climate change as the top threat to the country’s ‘vital interests’, the first time it has topped the list of concerns, according to Lowy Institute polls going back to 2006. The polling, of 2130 adult respondents between March 12 and 25 by the Social Research Centre, found 64 per cent agreeing climate change was “a critical threat”. Climate change threat now tops Australians’ concerns, Lowy poll finds.

Adam Morton reported, “Following the publication of the UN’s shocking report, we ask three experts to review and rank commitments from the Coalition, Labor and the Greens.” ‘Not adequate’: experts rate Australian political response to extinction crisis.

On the issue of climate, the PM’s response has ranged from dismissive to there already being a policy in place. However, late last night, David Crowe noted that he had shifted into the issue of “green tape”.

“Ahead of his final debate against opposition leader Bill Shorten in Canberra on Wednesday night, Mr Morrison warned of a threat to the economy from the expansion of union ‘red tape’ and environmental ‘green tape’ that tied down employers when they should have more freedom to expand and hire workers.” PM shifts attack on Labor to ‘green tape’ he says costs Australian jobs.

Opposition leader Bill Shorten has described today’s front page story in The Daily Telegraph and The Courier Mail which questioned his account of his mother’s academia, as “gotcha shit” and an editorial as “bloody lazy”.

Samantha Maiden reported, “Bill Shorten has lashed out at Sydney’s Daily Telegraph newspaper after it described him as a ‘slippery salesman’ who was ‘loose on the detail’ of his late mother Ann’s life and career.” Bill Shorten hits out at report questioning his mother’s memory.

The story by Anna Caldwell took exception at Mr Shorten for omitting parts of his mother’s academic career during the QandA appearance on Monday night. Labor leader Bill Shorten’s heartfelt story about his mother was missing one vital fact.

Brad Esposito reported, “Caldwell argues that Shorten’s failure to mention his mother’s law career is true sacrilege, saying that while the Labor leader ‘did not lie’ his omission in his story makes him seem like a ‘slippery salesman’ that ‘plays straight into the Liberals’ attack line’.” Bill Shorten slams The Daily Tele for trying to drag him over his late Mum.

Prime Minister Scott Morrison said today’s paper was “very upsetting” and he extended his best wishes to Mr Shorten. He added that the election is not about their families.

Conservative commentator, Andrew Bolt, said there was “no invention” in the recount by Mr Shorten of his mother. He agreed with his employer’s — The Herald Sun — decision not to run the story.

Ms Cadwell cut her teeth at The Courier Mail during the era of Queensland Premier Campbell Newman. According to her Linkedin experience, she served at the paper from 2011 until 2015 as state political reporter, national political reporter, news editor and chief of staff.

This was a period in the paper’s history in which corruption fighter, Tony Fitzgerald QC, labeled it, “The Craven Mail” and that it had a “pompous self regard” and deployed “gutter tactics”.

“An object of derision for thinking Queenslanders by virtue of its debased tabloid standards and blatant pro-government and anti-intellectual bias,” he said told Griffith University at his annual lecture.

Ms Caldwell went into the safe Sky After Dark environment with conservative commentator Chris Kenny to defend her story.