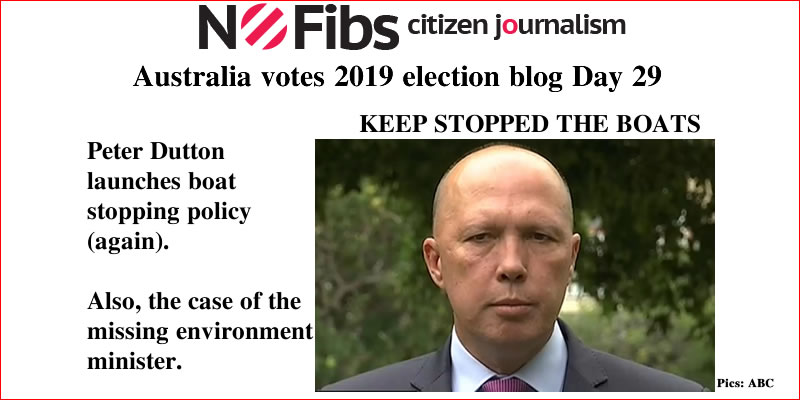 The case of the missing environment minister

Charlie Caruso reports, “NSW Senate candidate for Independents for Climate Action Now (ICAN), Rod Bower (@FrBower) is a husband, father, grandfather, author of Outspoken and — until recently — an Anglican priest in Gosford, at a church where he made his signs so famous.” Rod Bower’s journey from church signs to Senate candidate.

Even before the News Corp attack on his mother, Bill Shorten had already fired the first rockets last month in the war against the Murdoch press, accusing them of publishing ‘propaganda’. He’d even ignored the standing invitation to meet with Rupert Murdoch.

Anne Davies wrote, “In the weeks before the election campaign began, the opposition leader, Bill Shorten, turned down a standing invitation to meet with the US media mogul Rupert Murdoch, whose company, News Corporation, owns 70{17ac88c265afb328fa89088ab635a2a63864fdefdd7caa0964376053e8ea14b3} of Australia’s newspaper circulation and Foxtel’s 24-hour news channel, Sky.” Is News Corp’s attack on Shorten’s memory of his dead mother the cost of shunning Murdoch?

This afternoon, Labor’s Wayne Swan accused the Murdochs of being a political party in hiding.

Katharine Murphy reported, “The ALP national president, Wayne Swan, has unleashed on the Murdoch media, characterising the global news enterprise as “an additional political party hiding behind the pretence of objectivity and public interest”. ” Wayne Swan lashes out at Murdoch media’s ‘misuse of power’.

“No editor I worked for would publish the rubbish they now produce,” he wrote. For 30 years I worked for News Corp papers. Now all I see is shameful bias.

The case of the missing environment minister

At the third and final leaders’ debate last night, we found out Prime Minister Scott Morrison would keep is environment minister, Melissa Price.

Katharine Murphy commented,”The ghost of government past lingered when Morrison, on the hop, was forced to promise he would keep the current environment minister, Melissa Price, in her portfolio, despite her being such an abject disaster she’s been in hiding through much of the campaign.” Price is right: Morrison pledges loyalty to MIA environment minister amid listless debate.

The public still doesn’t know what the government’s response to the latest United Nations extinction report is. Ms Price has still not fronted the media to respond and the PM made a flippant remark on Tuesday about there being legislation in place.

Naaman Zhou reported, “Scott Morrison’s office has declined to say what legislation he was referring to when he said he had “been taking action” on a landmark UN report about the extinction of a million different species.” PM’s office silent after apparent reference to environment bill that doesn’t exist.

Former Labor minister, Peter Garrett, today urged Bill Shorten to declare a climate emergency if he won government on May 18.

Katharine Murphy reported,”The former environment minister Peter Garrett has urged an incoming Labor government to convene a climate emergency summit to plot a transition to zero carbon, and create a super department aligned to Treasury, like the Department of Post War Reconstruction after the second world war, to implement the transition.” Peter Garrett urges Bill Shorten to declare climate emergency if Labor wins.

Naaman Zhou reported, “Scott Morrison has identified a bill that restricts testing make-up on animals as an example of his government “taking action” on the extinction of a million plant and animal species raised by a landmark UN report.” Scott Morrison claims animal testing bill is ‘action’ on extinction crisis.

He trumpetted the government’s success in keeping the boats stopped but there was no mention of the thousands who had arrived by plane during the period. Mark Riley reported last February that 64,362 people had arrived by plane and filed for asylum between the 2014-15 financial year and 2017-18.

He also repeated the threat that people smugglers were watching and could send boats if an offer from New Zealand was accepted to take the asylum seekers and refugees Australia had sent to Manus Island and Nauru.

However, RMIT ABC Fact Check had previously looked at this claim last September and found it not to be the full story.

This is because of a bilateral arrangement between New Zealand and Australia, known as the Trans-Tasman Travel Arrangement, which allows their citizens free movement between the two countries.

However, people seeking asylum in New Zealand do not enjoy this privilege. Furthermore, asylum seekers granted refugee status would still require special travel documents and would need to apply for a visa before travelling to Australia.” Fact check: Could asylum seekers travelling from New Zealand obtain a visa on arrival in Australia?

Opposition leader Bill Shorten responded by saying the government had no policies and had “pressed the panic button”.

Asked about the government’s chances of re-election, Mr Dutton said he was confident of victory and that, “older Australians, in particular, are waiting with baseball bats for Mr Shorten”. This was paraphrased from a quote by former Queensland Premier Wayne Goss who said ahead of the 1996 federal election that people were, “sitting on their verandas with their baseball bats” for incumbent Prime Minister Paul Keating.

Mr Dutton also claimed his Labor opponent in Dickson, Ali France, “had started taking down Bill Shorten posters”. An intriguing comment to make given his media adviser, Jennifer Cochrane, had been found guilty of stealing posters of the state Labor candidate for Kallangur, Shane King, during the Queensland 2015 election. Was it a signal to his supporters? Mr Dutton did not respond.

Ms France said it was not the case that she was taking down Mr Shorten’s posters but the claim had made everyone laugh in her campaign office.

Mr Dutton also Tweeted his border security policy which contained the picture of a grey, unmarked vessel in Sydney Harbour. It was most likely the HMAS Adelaide (II) which has been decommissioned and is currently resting at the bottom of the sea as a dive wreck off the New South Wales Central Coast. Perhaps a metaphor for something.