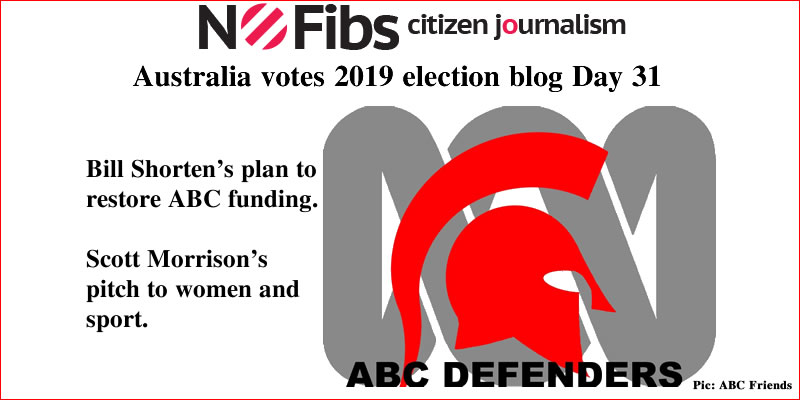 Labor’s plan to restore funding to the ABC

Michael Koziol reported, “The Coalition will make a pitch to young female athletes with a $30 million plan to raise the profile of Australian netball and turn Melbourne into a major international hub for the sport.” Scott Morrison pledges $30 million for a global netball hub.

Labor’s plan to restore funding to the ABC

It’s been five years, eight months and five days since the then opposition leader, Tony Abbott, declared to Anton Enus in the final hours of the 2013 election campaign that there would be, “no cuts to the ABC or SBS”. Once he became prime minister, Mr Abbot tore up the pledge. During a question time in November 2014, opposition leader Bill Shorten succeeded in extracting a confession from PM Abbott in the house of representatives.

Today, Helen Davidson reported, “The Labor party has pledged an extra $60m to the ABC and SBS should it win government next week, to boost the production of Australian content.” Labor pledges extra $60m for ABC and SBS.

Mr Shorten addressed ABC Friends Victoria and told the assembly, “This is not an election in which one can sit on the sidelines and say there is no difference or there is nothing at stake.”

“We want to start the conversation about five year funding not three year funding, proper certainty, locked away,” he pledged.

Also this week, Patricia Karvelas was also able to confirm with the new ABC managing director, David Anderson, that further cuts to services and staff would have to occur at the ABC under the Coalition’s current budget restraints.