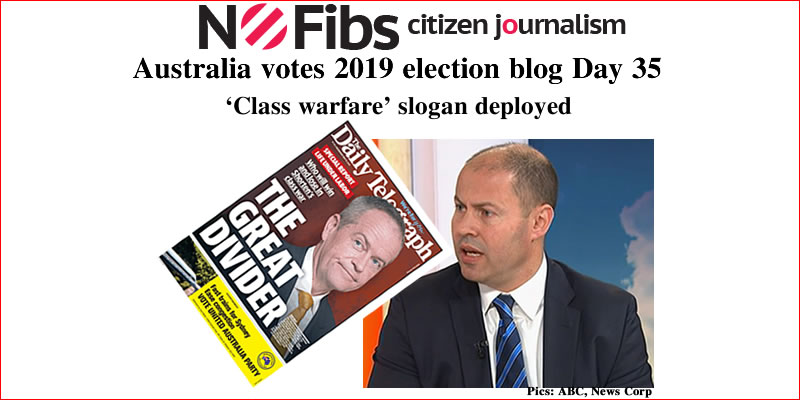 The guerrilla campaign to get Jim Molan over the line

No mystery over who Kerri-Anne Kennerley isn’t voting for. Today, she exploded over the prospect of a Bill Shorten led government over the issues of franking credit changes and a “Gender Commission”.

Jessica Lynch reported, “If Bill Shorten gets in, it’s the end of life as we know it,” she said. “Honestly, without question.” Kerri-Anne Kennerley is not a fan of the Labor Party and she has made it abundantly clear.

Photographer Kate Zarifeh has some more pictures from the campaign in Warringah. “It’s been an amazing couple of months working on Zali Steggall’s election campaign. One week to go and there’s still lots of positivity, enthusiasm and a desire for positive change within the community.” Turning the #AusVotes grassroots turquoise.

Opposition leader Bill Shorten campaigned in Perth where he pledged to create a tribunal to assist workers who had experienced wage theft.

Mr Hawke last appeared in public in December at the Woodford Folk Festival. With his health failing, he expected it to be his last one.

Prime Minister Scott Morrison campaigned at a housing development for the third day in a row to talk up his first home buyers guarantee.

Asked if he had consulted with any industry property groups on the policy he said himself, the finance minister and treasurer had been working on it for weeks. Incumbent Member for Corangamite, Sarah Henderson, appeared to want to add to the conversation but was quickly shut down by the PM.

The PM was also asked about an article by The New Daily’s Samantha Maiden in which she had interviewed Louis Christopher from SQM about his report on Labor’s changes to negative gearing. In contention was the Coalition’s claim that the changes would drive up rents by 22 per cent. However, Mr Christopher said even without any negative gearing changes, rents would rise by 8pc and 13pc over three years anyway. Rents will rise anyway: Investment analyst contradicts PM.

However, Mr Morrison dismissed the article and said he had received a letter from Mr Christopher which stated Ms Maiden had misquoted and taken him out of context.

Mr Christopher later released a statement saying his statement in full had not been published and he was complaining to The New Daily. He said he would not be commenting further.

Ms Maiden tweeted that she had quotes recorded from Mr Christopher.

There is nothing in the report that suggests a 22pc increase due to negative gearing changes.

Lesley Howard writes, “Distinctive campaign battle lines were defined long before Scott Morrison’s belated April 11 announcement that we would be going to the polls on May 18.” Dark clouds and silver linings, the ICAN climate action vision.

News Corp’s The Daily Telegraph and Treasurer Josh Frydenberg have both deployed the “class warfare” strategy against Labor. On breakfast television, Mr Frydenberg said Bill Shorten had delivered “an elevation in the class warfare rhetoric.”

The guerrilla campaign to get Jim Molan over the line

The Nationals have now retaliated and launched their own below-the-line how-to-vote cards for the senate. Michael Koziol reported, “The Nationals are directing members to ignore how-to-vote cards and vote below the line in the Senate, in a spectacular collapse of Coalition unity following Jim Molan’s rogue campaign for his own re-election. But Senator Molan defended himself by blaming former prime minister Malcolm Turnbull, who made below-the-line voting easier in his 2016 suite of Senate voting reforms.” Coalition tensions as Nationals launch their own ‘below the line’ campaign against Jim Molan.