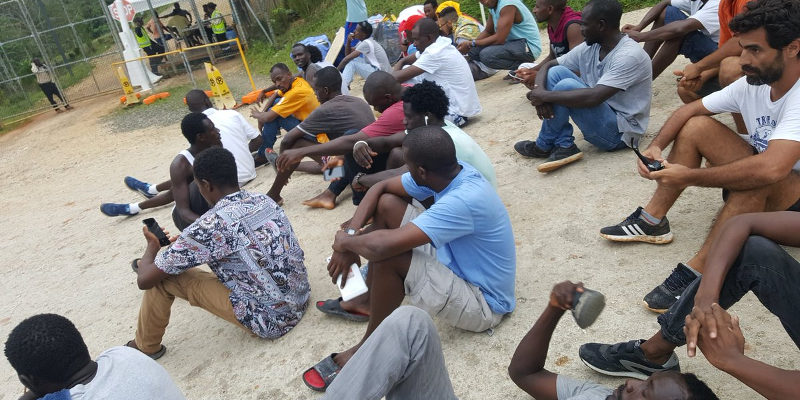 Refugees are currently holding a protest at the new East Lorengau prison on Manus upon discovering at least 65 are without anywhere to sleep, after being forcibly removed from the closed Regional Processing Centre (RPC).

The refugees are protesting in East Lorengau bcz there s no room for them. immigration and police are not help to find a place for them pic.twitter.com/TFhOkknnTC

Over 65 refugees have no place to sleep in East Lorengau even West is not really they put some refugees in class room still some left behind pic.twitter.com/kFbYnblrID

There are reports locals are blocking the road to West Lorengau and Hillside camps and men injured over the last two days are still waiting for treatment.

This is just one example of Dutton’s “peaceful” and “voluntary” removal from the detention centre yesterday.
Beaten from head to toe until he got on the bus.
Many of us forcefully moved yesterday were beaten.
Some need medical attention.#HumanRights #Manus pic.twitter.com/BwB5CP70gs

Police beat this man and now they bring him in west detention canter without treatment he is crying because of pine pic.twitter.com/gcVBPyQvRl

Refugees have posted online some men at West Lorengau are being forced to sleep in local classrooms because of a lack of facilities.

Journalist Asher Wolf (@Asher_Wolf) posted a tweet via @manusalert telegram app alleging at least 4 busloads of men were abandoned on the side of the road by drivers because there was not enough room for the men at the new camps.

Refugees also say the West Lorengau camp is still under construction and has no water in the bathrooms.
In a statement Minister Dutton said:

The Australian Government has been advised that some equipment has been sabotaged at the alternative accommodation centres, including damage to backup generators.

Huffington post and various other news outlets previously reported locals turning off a generator at Hillside Haus. It’s been reported angry locals have taken generator cables and keys, and have made threats about the noise.

“Last night some local men went inside the [Hillside] camp there and turned off the generators and took the cables. There are about 30 refugees there,” said Iranian refugee and journalist Behrouz Boochani, on November 18.

“Police entered Hillside and told security officers there not to turn on the power because locals are angry. Refugees in Hillside are living in darkness and heat tonight.”

“The locals are extremely angry because the generators are very noisy. The disturbing point here is that security officers could not prevent them and were really scared.”

Manus refugee claims the new West Lorengau facility, where refugees were forcibly taken to, is still under construction and has no water in bathrooms pic.twitter.com/5JSehiS3ZI

A operation using force to remove protesting refugees from the closed RPC was completed today by Papua New Guinea police and immigration officials.

there are lots of claims made on social media ….. a lot of this doesn’t add up to the facts

More footage but silence for the past two hours. #Manus pic.twitter.com/7sx9ywGMX3

Dutton on footage of Manus refugees being beaten: “There are lots of claims made on social media…a lot of this doesn’t add up to the facts”

the Aust Govt may think they can get away with it without anyone caring, but they are wrong, the world is watching. pic.twitter.com/UzLzwMK2XB

Thank you Australia For Your New facilities in The New Prison, After 4.5 Yrs Moved By Force us To The New Prison Camp, #AUS_PNG Remember You Can Not Destroy My Life, I will Keep My voice For Justice Freedom, I Don’t have Deserve To Be Stay More in The Fences. #New_prison_Life pic.twitter.com/vPz7lzG2or

Some people who were brought to East Lorengau were left waiting outside more than 4hrs. They were told there was no room for them. The person supposed to help them left and did not come back for 4hrs pic.twitter.com/xf55jiN3SF