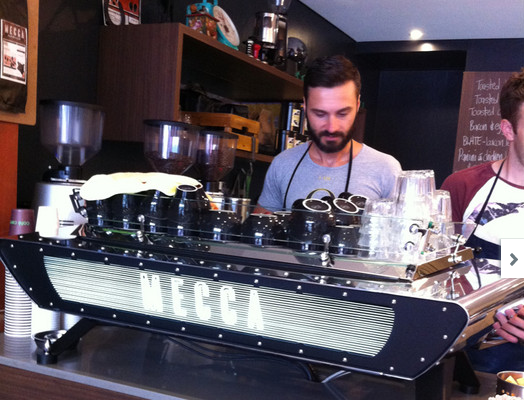 Murat owns Café Centro, which sits in the middle of Eastwood Plaza at the heart of the Bennelong electorate. As he made my long black this morning, I asked whether he’d seen much political activity in and around his shop. His reply – “no nothing yet”- indicated to me that the 2013 battle for Bennelong has not yet been seriously joined.

There has, however, been some preliminary skirmishing. Confirmation that the sitting member is listening was dropped in our letterbox earlier in the week with pictures of John Alexander being told:

Our power bills have gone through the roof. With all these new taxes, it’s getting tougher to run your own business (and) I’m concerned about the boats, and what they’re costing

The Liberal’s case was further advanced by one of the local newspapers The Weekly Times, owned and run by John F Booth, recognised for his bowler hat, climate change scepticism and political partisanship. Two excerpts from this week’s ‘JB’s World’ might help give you an inkling as to the way he leans.

“Maimo Cook, pictured right was delighted to receive a message from the Queen on her 100th birthday last Wednesday, which she celebrated with Estonian community friends and relatives. She was not so excited about receiving a greeting from the then Prime Minister Julia Gillard which she filed in the circular filing cabinet. Some body said that’s not so nice, to which Maimo replied: she’s not so nice either. Fame is fleeting

JA,or more formally John Alexander OAM MP, the Federal Member for Bennelong, will be celebrating his third birthday as an MP tomorrow, Thursday, and is probably hoping for a birthday present of an election win in the not too distant future. The fact that dear Kevin 747 Rudd got his own back on Juliar G might bring his birthday gift forward a few weeks from Juliar’s proclaimed date of September 14.

The other side greeted Rudd’s return more kindly, with NSW Labor General Secretary Sam Dastyari naming Bennelong first as one of the seats which Labor could now win from the Liberals.

One has to wonder however whether this ambition can be realised. The Labor candidate, Jeff Salvestro-Martin, reported by Scott Howlett in the Northern District Times, says “Bennelong is winnable”, but then asked why he was not launching his campaign sooner replied, “There’s a hell of a lot of work that goes into these things, a hell of a lot of work – with everything that’s happened, July 24 seems about right.”

Some Labor supporters could with some justification ask – have we got 3 weeks to spare?