Breaking the law to save lives – The #QldWeekly Blogazine: @Qldaah #qldpol 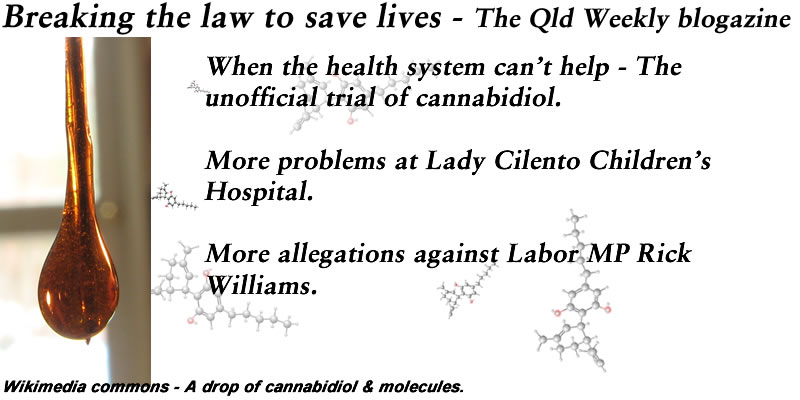 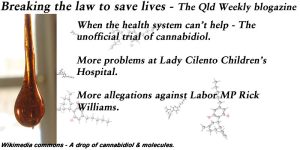 Breaking the law to save lives.

Breaking the law to save lives

Cannabidiol (medicinal cannabis), the active ingredient in the oil extracted from the marijuana plant will always have a “druggy” stigma attached to it. It is only one of 85 such cannabinoids in the plant and as a medicine, has no hallucinogenic effects. The substance is being used illegally but is giving hope to hundreds of Queenslanders with sick family members.

Last week Queensland Health Minister Cameron Dick informed parliament that the substance was changed from a schedule 9 poison to a schedule 4 (S4) prescription medicine. It means it can proceed to Therapeutic Goods Administration for listing on the Australia Register of Therapeutic Goods. Even though the S4 medicines require a prescription, there is always a potential for misappropriation and misuse. No system is water tight.

Should it be successful, it would have the same listing as midazolam, a sedative currently used to prevent seizures in epilepsy suffers. These types of drugs can have side effects such as headache, drowsiness, nausea, vomiting, hiccups, coughing, pain & inflammation. They also may not work at all for a group of patients. However, there are no such side effects from cannabidiol.

Brisbane Times reporter, Cameron Atfield, interviewed four families where medicinal cannabis was in use for his article; “Families already using medicinal cannabis on children ahead of trials”. Some did not give their real names to the piece as technically they are breaking the law.

NoFibs has also been in contact with a family where the daughter has suffered multiple daily seizures as a result of complications from a deliberating condition. When the standard drugs didn’t work, this desperate family also turned to cannbidiol. The family says it is early days yet, but after a short term of treatment there have been no seizures.

The family also expressed frustration at not being able to share results with health practitioners and the public. They suggested an amnesty to allow individual cases to be discussed and reviewed.

With official testing of the medicine scheduled begin in 2016, the three Eastern states of Queensland, New South Wales and Victoria have agreed to co-ordinate efforts in the outcomes and research. However, Brisbane Times columnist John Birmingham recently wrote that Queensland Premier Annastacia Palaszczuk should skip the trials; “Rigorous, peer reviewed clinical trials have been completed overseas in Europe and the US. Our medical professionals are every bit as good as the scientists who conducted those earlier trials and they will return exactly the same results. The policy will change. That is inevitable.”

#qldpol @SpringborgMP would like to be recognised for his contribution to medicinal cannabis.Such a progressive… pic.twitter.com/lhMHa1qA1Q

Geoff Breusch reported: Premier Annastacia Palaszczu has used a visit to the Pentagon to unveil a bold plan for Queensland to become a major fueling stop for the US navy..

@AnnastaciaMP and an honorary maroon we found at the Pentagon #9News #qldpol pic.twitter.com/h7qWaLbKNG

In the secretary of the navy's conference room @AnnastaciaMP nuts out a new alliance for Qld #9News #wldpol pic.twitter.com/0Vc0TIGqyr 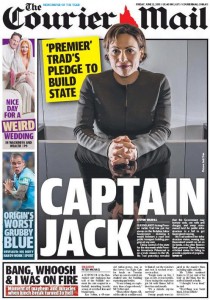 Premier @AnnastaciaMP Palaszczuk is in Washington, on the day one of her first overseas trade mission. #QldPol #9News pic.twitter.com/GZX2rpARtN

Premier in Washington hoping to turn Townsville into a new home for US Fleet #9News #qldpol pic.twitter.com/zbDLlLd7OU

Work of the Qld Governor

The Clerk of Parliament brings Bills to which the Governor provides assent in a historic red despatch box #qldhistory pic.twitter.com/1q76xsQIki

The Gov presides over Exec Council formed by the #Qld Constitution to give legal effect to certain govt decisions pic.twitter.com/dx9UOClIbm

Rick Williams – No criminality in matters from Cairns legal firm

“This report sought to determine whether the adverse impact of broad scale land use on the quality of water entering the Great Barrier Reef was declining. To determine this we focused on:

Emily Fardoulys reported: There are claims Australians and UNESCO have been misled about the health of the Great Barrier Reef..

Opposition wants Palaszczuk to comment on cases before police and CCC

Premier says Rick Williams under investigation by police 'and I will leave it at that' #9News #qldpol pic.twitter.com/KdINjZl9sq

Has Rick Williams been full and frank with @AnnastaciaMP "I hope he has." @abcnews #qldpol pic.twitter.com/RVU3MRDu5J

The first meeting of the Premier's Business Advisory Council is underway. #qldpol pic.twitter.com/3v7kzegneg

OL Lawrence Springborg claims there is a difference between meeting with unions and business.

You'll see these signs at 25 new intersections in Brisbane from today. @7NewsBrisbane pic.twitter.com/7wNtIJN7Zo 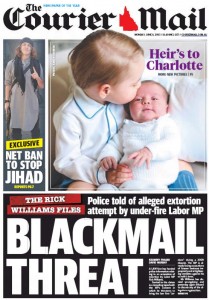 Max Futcher reported: Laws to restore civil partnership ceremonies for same sex couples could be in place in Queensland by the end of the year.

On behalf of all Qlders we congratulate those Qlders honoured for their services to our community. #Thankyou https://t.co/yUGtSbLLbq

Michael Best reported: Despite The Sunday Mail report, LCCH confirms no children have been turned away.