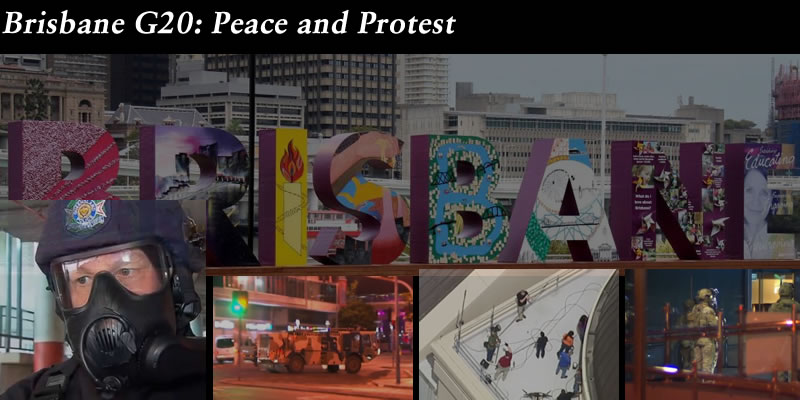 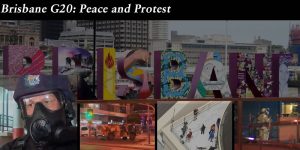 ABC News Qld: Special police powers to search and arrest have been enacted.

The G20 has descended on Brisbane under a raft of legislation dubbed “Newman Law”.

If you’re ever offered a chance to NOT host a G20 conference, take it. The disruption brought about by road closures, vehicle searches, special police powers, armed soldiers and the general sense of inconvenience erodes any benefit. It’s a bit like giving the keys of your house to a party of complete strangers whilst you go and live in the garden shed for a month.

Unlike hosting an expo or an Olympic games, there’s very little for the public to interact with. Except for a speech or two, the top 20 world leaders and entourage will be locked away, surrounded on all sides by phalanxes of security, police and the army.

Despite this, both the Brisbane Council and Newman Government have put in an effort to garner some interest from the public. Spending $10 million on the G20 culture precinct, the ABC reported that creative director of the cultural activities, Athol Young was paying close attention to social media feedback.

“We’re following a lot of the online and social media commentary that’s going on,” he said. “YouTube and Twitter and Instagram go wild with things like the Brisbane sign, with the Colours of Brisbane, the dinosaur in Queen’s Park, the changing faces of Brisbane on the Treasury Casino Hotel – these are all things that quite iconic about the program we’ve put together.

Centred around dancers, concerts and beaming city lights on buildings, the main attraction is the colourful “BRISBANE” sign. None of it reflects what is going on inside the G20 and the economic negotiations being formulated by the world leaders.

In the lead up to the opening of the summit, Brisbane Lord Mayor Graham Quirk was desperate to avoid the central business district becoming a ghost town by offering free car parking.

“We don’t want a ghost town,” he told listeners on @612Brisbane.

“That’s not going to work for Brisbane into the future. And for the retailers, I just say this, and the restauranteurs, we want positive reports because it’s about tourism in the future and that’ll be putting bums on seats in those retail outlets and restaurants.” 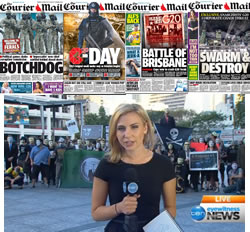 G20: Some of The Courier Mail front pages contrasted with a peaceful protest by group Anonymous.

Premier Campbell Newman was also concerned about the potential lack of citizens in the city and encouraged people to “have a bit of a gander”.

“Let me be crystal clear, because I am afraid there are mixed messages out there,” he said.

“There are exclusion zones around the key venues, OK? So where the G20 leaders will be meeting or are being accommodated, people won’t be able to get in. But apart from that, the Brisbane CBD, the Southbank Parklands, all the normal parts of our great city are open. Open for business, open for recreation, open for people’s normal fitness regime and people should take the opportunity to have a bit of a gander of what is going on in our city.”

Both reassurances came too late. A barrage of media images depicting rioting protestors from previous G20 summits around the world had already penetrated the public perception. In particular, The Courier Mail had spent most of the year running front page stories about G20 chaos and the conspiracies of disruption. It had all been an easy grab for the nightly news, virtually reading out the headlines against backdrops of burning cars and rioters.

Brisbane council also overreacted by closing Jagera Hall, a community centre for the local indigenous community of Musgrave Park. Indigenous elders had planned to use the center as a base for a number of registered protests. However, claiming they’d found asbestos in the building, the council moved in overnight and removed furniture and computers.

The community was left to wonder if ‘ethic cleansing’ had occurred ahead of the G20 and promptly marched on city hall staging a protest from the public gallery. The council decision was reversed the following day and the campaigners allowed back onsite.

Brisbane has been no stranger to protest in recent years under the Newman Government. In contrast to the print media, as Ten News Queensland’s Kristina Costalos reported on 5th November (Guy Fawkes day), the group “Anonymous” displayed a peaceful protest with excellent co-operation between police and protestors. No one was arrested and no damage occurred.

Into the final week before the G20 launch, business remains ‘wary and nervous’. Some have opted to close for the period Friday 14th through to Sunday 16th whilst others are willing to open and see what happens. With Friday declared a public holiday in Brisbane, a spike in tourist numbers at popular holiday spots suggests the city will empty out before the weekend.

Taking the opportunity to close for renovations, San Churro Chocolateria store manger Ally Wood told @Brisbanetimes that too many citizens had already made the decision to leave for a long weekend.

“We’ve taken the opportunity to shut the store to do renovations,” she said. “Given all the shutdowns through the city, and people coming in, and all the protesters and everything that are coming in. A lot of people are already heading in the opposite direction away from here.”

In between the world leaders and the public is a full scale security operation. Seemingly far removed from the purpose of the G20, both police and military leaders have taken great pride in describing the event as “the largest peace time security operation in Australia’s history”. The Newman Government assisted by drafting the “G20 (Safety and Security) Bill 2013”, giving police special stop and arrest permissions, and provisioning for the declaration of special “restricted zones” and “declared areas”.

The military is now camped at the RNA showgrounds to the city’s north and are staffing the various vehicle checkpoints. They expected to search over 1000 vehicles for explosives. Blackhawk helicopters are buzzing the city at all hours and even F-18 super hornet fighter jets have been made ready to scramble and patrol. Along with the usual banning of weapons, the public are not allowed to carry eggs, flotation devices, kites or reptiles.

So far it’s been an operation of precision, one a military Major may even be proud of. Or perhaps in this case, a Major-Premier.

Official G20 uniform is a wool suit. Like everything else in this circus come to town: dopey southern interlopers. Welcome to 40 degrees.