Buildings in the sky – The Qld Weekly #qldpol: @Qldaah 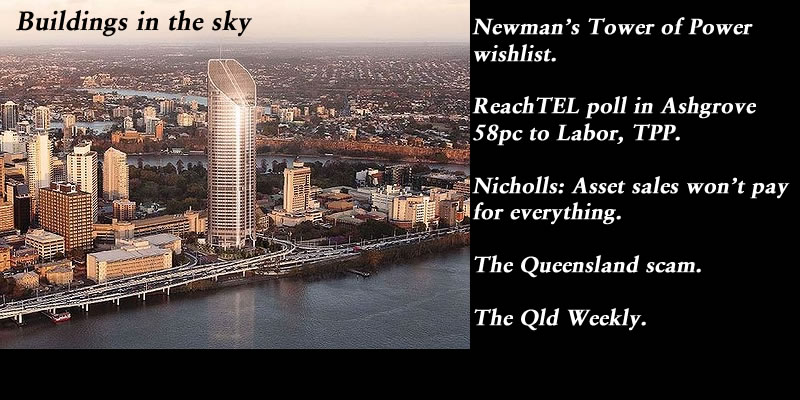 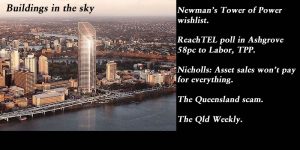 A ReachTEL poll conducted for the Together Queensland union in Premier Campbell Newman’s electorate of Ashgrove has him still trailing in the polls for his local seat. 36 percent of people supported Newman whilst 51.1pc would give their first preference to former Ashgrove MP, Labor’s Kate Jones. This translates to a two-party preferred (TPP) of 58pc to Labor. Newman currently holds the seat with a TPP margin of 5.5pc.

Labor is yet to officially pre-select Kate Jones for the candidacy of the seat. However, as ABC’s Matt Wordsworth discovered this week the domain name for “katejones.com.au” has been registered with contact name listed as Labor state secretary, Anthony Chisholm.

As with the numerous previous polls conducted over the term for the union, Newman Government spokespeople dismissed the results as “push polling”; a method which seeks to persuade participants to vote a certain way by asking a series of election related questions along with which candidate they would vote for.

One interesting note from the Ashgrove poll is the gender breakdowns. Kate Jones is pulling female votes from PUP: https://t.co/EHPZLpNCt2

Queensland transport minister Scott Emerson and Premier Newman boarded another train this week to announce that they’d “found” $30 million in extra funding which had suddenly turned up in the transport budget. This amazing windfall was attributed to the federal Abbott government’s removal of the carbon tax.

“We have found $30 million worth of savings in the transport budget with the abolition of the carbon tax,” Newman proclaimed proudly.

“We’re now asking Queenslanders, do they want a decrease in public transport fares or do they want more services?”

Even more shock, the normally authoritarian Newman was now consulting with the public as to where they wanted the money spent, albeit there were only two choices. He even spent a morning in his seat of Ashgrove talking to constituents about the plan. Out of a sample of 17 people, 59pc of supported a decrease in fares whilst 41pc opted for more services.

My bet is on lower fares, it’s the populist thing to do, but you can click your choice here at Translink. You can vote multiple times by clearing your cache, using another device or using another browser.

Nine News Brisbane: Queensland Treasurer Tim Nicholls says not all infrastructure promises can be paid for by asset sales.

Queensland Treasurer Tim Nicholls seemed to apply the brake to the rush of infrastructure project promises and crane counting. In a frank admission, he revealed not everything could be paid for by future asset sales.

“There are a range of projects that are able to be considered to be funded by this pool of money,” he clarified.

“The suggestion that all these projects is (sic) going to be built is not a suggestion of this government.”

Queensland’s gross debt is close to $80 billion. The Nicholls plan for asset sales is to generate $33.6 billion in asset sales. He’ll allocate $25 billion to “repay the (gross) debt” leaving $8.6 billion for new infrastructure projects. However, Newman has all ready pledged $9 billion worth in new roads, dams, bridges and a new Bus and Train (BaT) tunnel for Brisbane.

Of course it’s all political speak, Queensland doesn’t have a bank loan of $80 billion to repay. Gross debt is generated by issuing government notes or bonds. Queensland Treasury Corporation issues these on behalf of the government and distributes the funds to state government and it’s entities and also to local Queensland councils.

Should the government be returned at the next election in 2015, Nicholl’s main objective will be to deliver a surplus in the next term. The cash injection of $25 billion from sale of assets will seemingly make him Queensland’s greatest ever treasurer.

Once the money is spent though, the question for future governments will be, “what now?”

A suspicious betting scheme involving notorious former Queensland police detective Mick Featherstone was made aware to Attorney-General Jarrod Bleijie in June of this year. Unsolicited, investor Eckhard Schneider was contacted by the company UK Home Based Business with an offer to join. With the firm linked to Featherstone, Schneider lost $170,000 when the scheme was suddenly shut down by operators.

Having lodged a complaint with police which led to no action, Schneider contacted his local MP (unnamed in media reports) in order to seek answers from Bleijie. In June Bleijie replied saying that he could not intervene in the matter and recommended he seek legal advice. Bleijie’s office also told ABC’s Mark Willacy that it recommended police action.

However, Schneider had only been seeking assurance that the Newman Government was aware of the scam and requesting that something be put in place to prevent it happening again.

“Are the legislators aware of this scam?” he asked.

“If so, are they going to take any actions to prevent further spread?”

The matter has now made its way to the Queensland Crime and Corruption Commission but it seems strange that Queensland’s most powerful law officer felt powerless to take any action or answer questions. The man who had pledged to cut crime and make Queensland the safest place to raise a family was seemingly uninterested in a betting scam.

ABC News Qld: Revelations of the wish list for Newman’s Tower of Power.

Campbell Newman’s monument to himself, the so called “Tower of Power” is only half-built but all ready people are empire building by putting in requests for Foxtel, LCD Televisions, selected artworks from the Queensland art gallery & even a towel service. Taxpayers will also foot the bill for new furniture at the 1 William St office with public servants leaving their old equipment behind.

In 2012, no sooner was Newman in power he began planning the new digs. As thousands of public servants were made redundant, Newman’s new 45-storey tower were approved by Brisbane City Council in May of 2013.

@7NewsBrisbane also report this week on the strange deal that had been negotiated on the office space rental at $600 per square metre when other buildings were being taken up at half the cost. With no business case raised, in December 2013, the Queensland Auditor-General Andrew Greaves questioned the entire projects worth when he revealed that taxpayers would have to pay the rent total of $1.2 billion over a guaranteed fifteen years.

Providing the most extravagant castle for itself seems at odds with the Newman Government’s austerity measures inflicted on its’ own people. The Tower of Power is due for completion in 2016.