The chances of same-sex marriage in Australia: @burgewords comments 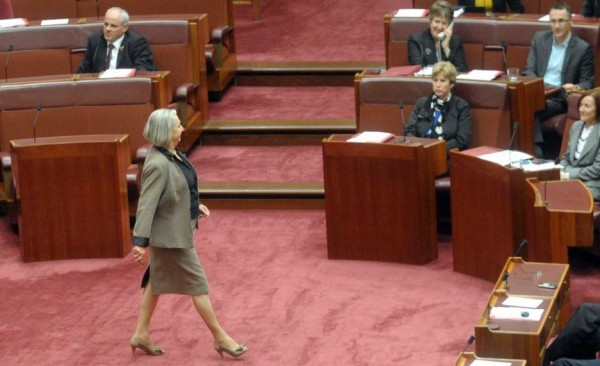 Supporters of marriage equality in Australia would have been forgiven for thinking the issue was dead in the water under the 43rd Parliament.

Then something happened which nobody predicted. Kevin Rudd, with one cogent blog post, became the highest-profile Australian politician, and christian, to get behind marriage equality.

Before he was reinstated as Prime Minister, this news remained a hopeful anecdote. Now it’s fast becoming the point of difference which may wedge Rudd into a win at the ballot box.

Galaxy polling from last weekend indicates 11 per cent of polled Coalition voters would back Kevin Rudd and Labor at the election, based on his support for same-sex marriage.

So, what are the chances of marriage equality under the 44th Parliament?

In November 2011, at the ALP National conference, two things happened which defined the marriage equality credentials of the ALP. Support for same-sex marriage was adopted, but also a subsequent motion allowing Labor ministers a conscience vote should a bill come before parliament.

This double-edged sword was wielded in 2012, when the Government voted on marriage equality with their consciences, while the Opposition voted with Tony Abbott’s. The bill to amend the Marriage Act was resoundingly, and predictably, lost.

The ALP’s conscience vote on same-sex marriage cannot be changed at party level before their 2014 national conference, which is why Rudd’s new front bench is busy saying Tony Abbott’s grip on his ministers’ views is heavy-handed.

So let’s look at Abbott’s stance. Despite the coming-out of his lesbian sister Christine Forster, Tony Abbott has remained unconvinced by her deeply held desire to see equality in her country, let alone within her own family.

The Abbott daughters talked about Dad’s outmoded opposition to it, and Christopher Pyne subsequently made suggestions that the Coalition party room would have no commitment for or against marriage equality, after the election.

Progressive voters, quite rightly, saw these as so many dangling carrots. When pressed, Abbott dismissed the suggestion there was a need to define marriage equality as an important issue for a potential Coalition Government, citing how close his views were to Prime Minister Gillard’s.

Marriage equality never had less of a chance in Australia, until Rudd’s backflip.

Most of the religious themes of his blog post were lost on me. As someone who gave a live submission to the Human Rights Commission’s 2006 Same Sex: Same Entitlements hearing, which was used by Rudd and his first cabinet to remove almost 100 pieces of legislation discriminating against same-sex couples, I knew he’d long had all he needed to understand that the case for same-sex marriage was already a human rights no-brainer.

But it wasn’t what he wrote which held my attention, it was what he said at press conferences, stating a desire to end the “unnecessary angst” amongst a large proportion of the community.

It’s an interesting word, angst, but it’s a great description of the stasis an increasing number of same-sex couples endure while we wait for our leaders to sort out marriage equality.

We are encouraged into joint financial commitments, and all the customs and commitment inherent in extended family life, yet we are denied access to the fundamental legal and symbolic bedrock of loving relationships, if we find we want or need one.

It does give you angst to know that if something happened to your partner, through death or incapacitation, even a distant relative could make a case for financial gain, while you are left chasing statutory declarations warranting what a simple marriage certificate could.

It does give you anxiety to know that holding hands in public is still considered by some to be a political act, knowing that we should have secured marriage equality long ago in order to start the real work: changing hearts and minds, under the protection of full equality enshrined in law.

Kevin also did something which added to my confidence in him on this issue. He stood up to his sister.

Loree Rudd, of Nambour, Queensland, infamously ditched her ALP membership in 2011 when the party adopted same-sex marriage. She’s since renewed it, for obvious reasons, but her brother told her about his change of heart on the issue the night before he made it public.

If he explained it to her the same way as he explained it to us, I imagine Kevin reminded Loree that Australia is a secular nation in which religious conviction is secondary to social reform. That realisation, matched with his vocal reassurances to Australia’s same-sex community, is what you call leadership by any definition.

Newly minted Prime Minister Rudd and his Deputy Anthony Albanese have since affirmed their commitment to making marriage equality a reality in Australia, even suggesting alternatives if the Coalition remains unchanged in its opposition to conscience voting.

Despite many in its ranks making their support for marriage equality public, including self-proclaimed preferred Opposition Leader Malcolm Turnbull, and Senator Sue Boyce’s decision to cross the floor and vote for it, Tony Abbott and the Coalition remain locked into opposition to same-sex marriage in Australia.

A clear choice has presented itself where there so recently was none.