Burning down the house with the mother of all #ausvotes wedges: @Jansant comments 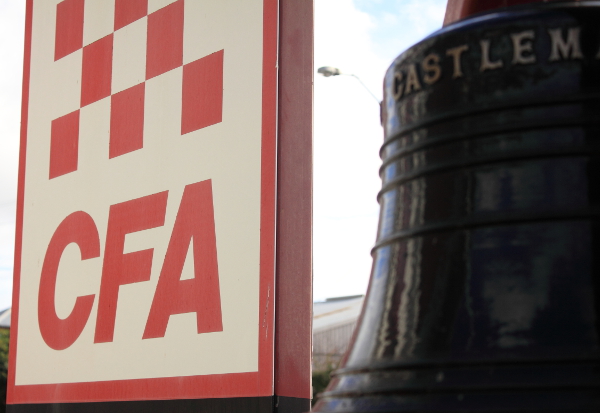 The Country Fire Authority has a deep rich history and is part of the cultural heritage of rural and regional Victorian. Photo: @jansant

After the Liberal Party and their flying squad of media goons unsuccessfully went after the #Indivotes kids who dared oppose and beat them – I’m not surprised they would also attack one of the oldest organisations in Victoria that brings people together from all political backgrounds for the common good.

The CFA has a deep and rich history rooted in the 1850s when communities began creating their own local volunteer firefighting brigades. In the early part of the 1900s, volunteer bush fire brigades were formed, mostly consisting of landowners.

CFA is a part of the culural heritage of every regional centre, small town and hamlet in Victoria – people are rightfully proud and protective – and this is exactly the place the Liberal Party has brutually rammed its wedge.

Murdoch’s media have run headline after headling promoting the idea the Unitied Firefighters Union (UFU) are on a quest to grab control of the CFA.

CFA has over 59,000 volunteers, 1800 career firefighters and the government as part of the deal with UFU will increase career firefighter numbers by 350 – is the Liberal Party really arguing the UFU is trying to takeover the CFA based on these numbers?

With increased fire danger and intensity due to climate change, the government would be negligent if they did not increase resources to the states firefighting capacity.

Many career firefighters started as volunteers, are the Liberals really saying no to a career path for young CFA volunteers across Victoria?

In an election that’s all about jobs and growth, the liberals are arguing against an increase in jobs!

Like all workers, career firefighters deserve to have minmum standards to ensure workplace safety. Not only was this an outright lie used by the Liberal party and Murdoch to stir up resentment, but the clause in it’s true form only applies to 3{17ac88c265afb328fa89088ab635a2a63864fdefdd7caa0964376053e8ea14b3} of stations in Victoria.

Read UFU’s response to claims made by the Liberal Party election campaign.

Volunteer Fire Brigades Victoria (VFBV) is supposed to be the voice of CFA Volunteers, the Liberal Party weilds a lot of power within the organisation – many members are upset by the way the dispute has been politicised.

The CFA volunteers I know say this drags Indi Libs deeper into disrepute, and now won’t vote for them #indivotes https://t.co/5mP68bnoy6

Liberal #Indivotes candidate Sophie Mirabella, has been running hard on their CFA campaign, but a senior member of her campaign team could not name a single CFA station in Indi affected by the enterprise agreement. 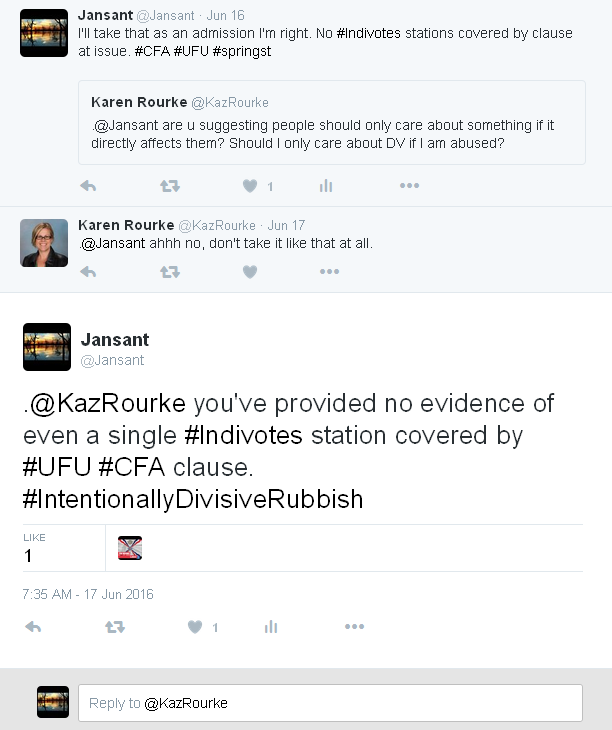 In modern campaigning, if you own the digital real estate, you control and coordinate the campaign – this is a simple statement of fact. 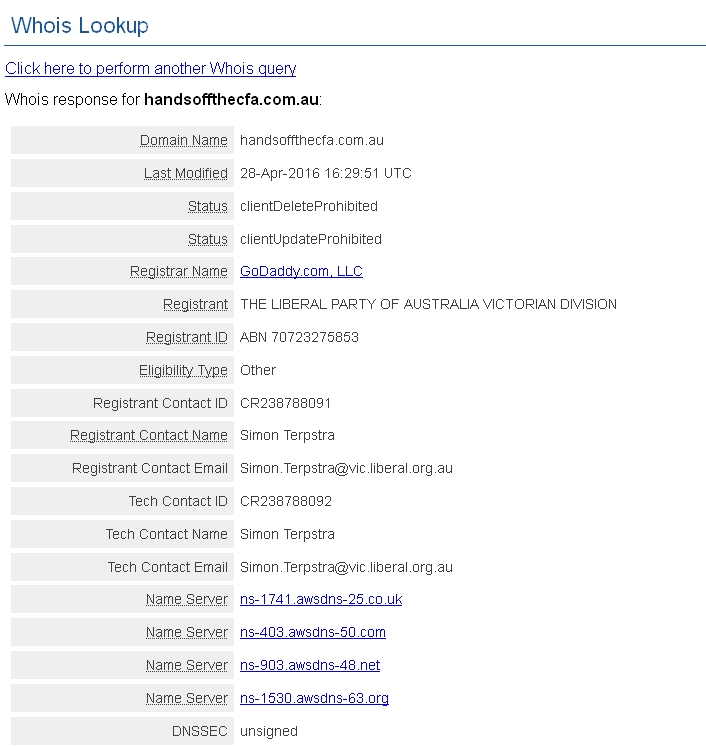 Not only did the Liberal Party set out to drive a wedge through the heart of the CFA and its people, they’re using it to raise party funds through their CFA election campaign website – treachery against Victorians spins a healthy party profit.

In Indi, despite a CFA directive not to, Liberal Party members continue to wear Liberal Party and CFA clothing at pre-polling booths.

Tony Schneider, the president of the Benalla Branch of the Liberal Party at pre-polling on Wednesday. Photo: @jansant

None of the Liberal Party CFA election material at polling stations is authorised (although their CFA campaign website is). Why won’t they put their party name to their campaign?

A short time later the Australian Electoral Commission (AEC) allowed the sign back, unauthorised. No Fibs rang the AEC, we were assured someone would return our call with a reason for reversing their initial decison – they never did.

Has a candidates poster been altered from the authorised version by attaching a Herald Sun sticker? 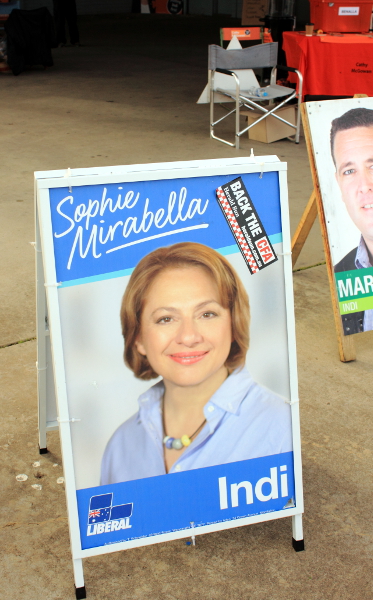 The CFA campaign is without a shadow of a doubt a Liberal Party campaign, they are funding it, organising it, and own the digital real estate for the campaign. It’s a decption that their CFA advertising material is unauthorised.

The Liberal CFA campaign has been run on lies and misinformation, each time one claim is proven wrong, they promote another. 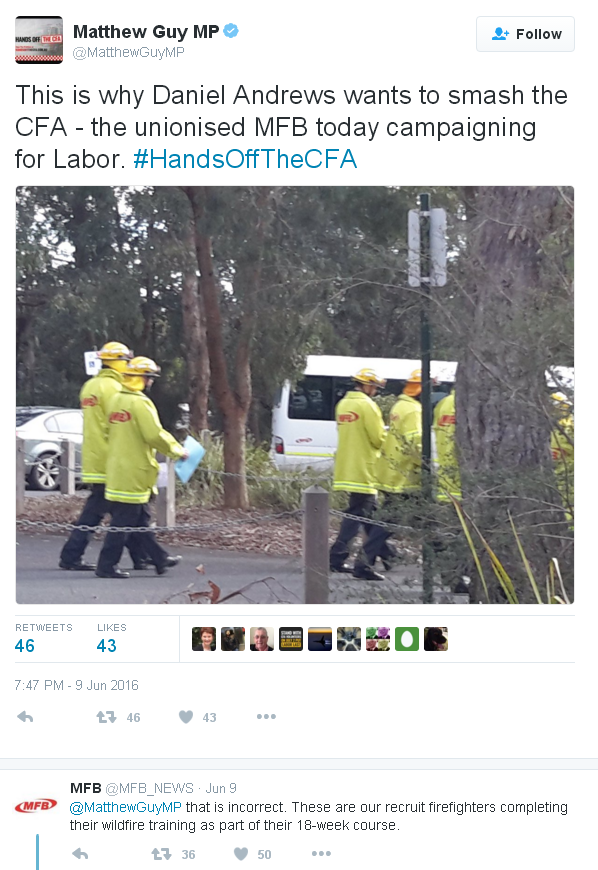 No Fibs spoke to a career firefighter, we agreed to keep his identity confidential.

I’m from a family respected and long established in the district and we’ve been involved in the CFA for a very long time – it’s hard to attack my family name, in that regard I am luckier than some of the people I work with.

The divisions, misunderstandings and mistruths that are being put out there means members of my own family are in conflict with me, they won’t even listen to what I have to say. When I’ve ask family members why they’ve agreed with something on social media, they’ve said they always stick up for the volunteers, but they’re going against me and they don’t know the truth.

My mother was initially angry, but she sat down and discussed it with me and now understands.

My wife works for an employer that is publicly on the volunteers side, eventually the employer asked my wife questions, there was a fair bit of tension. My wife has to work for someone, she supports me in what I do, the tension this has created in her workplace is not fair.

Firefighters at my station have family members that refuse to speak to them at all since the election campaign began, they’re being excluded from regular family get togethers, things like that.

There is no disconnect between CFA staff and the union, which is a massive misconception out there in the community.

It hasn’t affected our kids, we’re lucky, I know of other people’s kids it has though.

To be honest, about 3 weeks ago I broke down at work, was an emotional wreck, there’s a lot of guys struggling. We come from volunteer communities. Many on their days off go home to these communities and they’re copping it.

Have there been flow on benefits to volunteers from your industrial agreements?

The UFU was the driving force behind an inquiry into the Fiskville cancer cluster.

Negotiations for the new UFU CFA EA began on April 5 2013, the dispute is a legacy issue from the last Victorian Liberal government.

In early June, CFA management asked Fairwork Australia to intervene in the dispute – their ruling:

nothing in this agreement shall prevent volunteers in the CFA from providing services normally provided by such volunteers as volunteers without remuneration.

This is a very clear ruling which came with recommendations to clean up language in some clauses to ensure there is no confusion.

Confusion the Liberal Party is using to spin lies and mistruths.

It would be fair to say the current Labor government could’ve handled the dispute better, but it is also obvious the Liberal Party in conjunction with partisan players in the VFBV intended to keep this dispute alive and inflame it for the Federal election. I bet they try to keep the dispute running until the next state election also.

A wedge in politics is nothing new, what is new is the brutal nature of this one and the sheer scale of it.

Across the state families are being torn apart, life long friends now enemies, the children of firefighters are being bullied and traumatised, bullets are being dropped into letter boxes and donation collection buckets, fights are breaking out in newsagencies and heated confrontations at pre-polling stations.

Families have been providing volunteers for generations, many have paid the ultimate price for their service to community. These people were not Liberal, Labor or Green, they were brothers, sisters, fathers, uncles, neighbors and strangers.

The Liberal Party of Australia is a city centric party, and it shows: no party or candidate seeking to genuinely represent the best interests of rural and regional Victoria would ever run such a vile intentionally divisive campaign based on mistruths, deception and outright lies.

Their CFA wedge is an attack on the cultural heritage of all Victorian communities regardless of what political party banner you fly.

The Liberal Party have proven they only care about power and they’ll trash communities and families to obtain and hold it. They are not fit to govern.