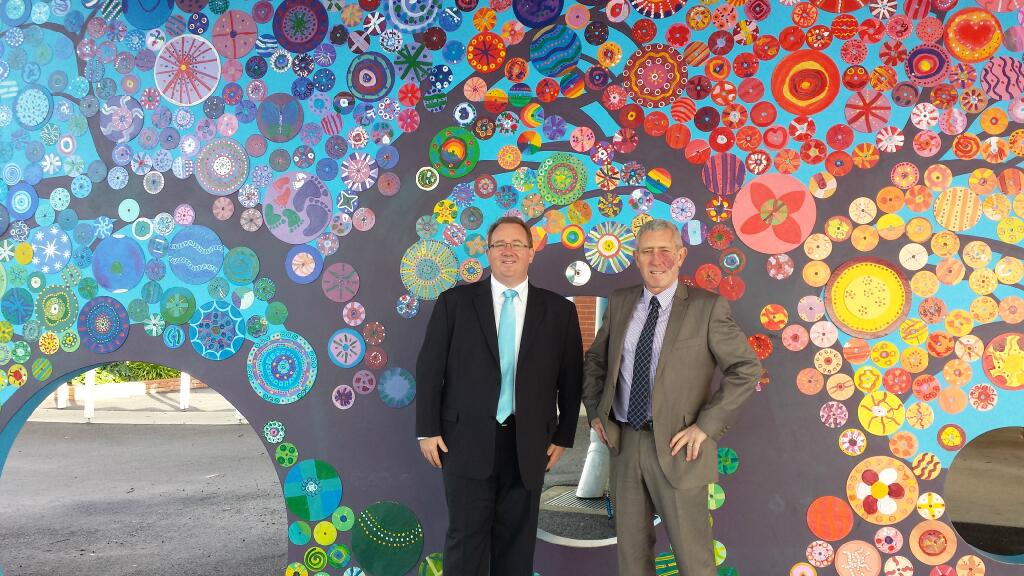 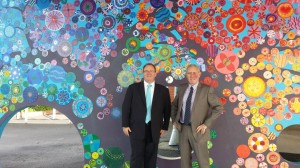 The day of our interview, David Feeney resigned from his Senate position to run for the House of Representatives in the long held Labor seat of Batman, in the suburban north of Melbourne. Feeney is between offices, so we meet at a big, empty Rydges Hotel café overlooking Bell St, Preston, on a stormy day. He comes with his campaign manager Jeff who organized the interview. Feeney is wearing a suit and … blue tie. I ask him about his musical tastes first up, and to my surprise he says he’s a huge fan of the Pet Shop Boys, Duran Duran and Frankie Goes to Hollywood.

After sparking his interest in politics at university through the Labor club, Feeney went on to work for the Transport Workers Union, and then for years within the Labor Party, including as campaign manager for Victorian Premier Steve Bracks and Premier Mike Rann in South Australia and then as Kevin Rudd’s marginal seats director in 2007.

Favell: So have you picked up any tips from yourself about how to run this campaign?

Feeney: I do chuckle to myself that I’m doing the things I’ve preached to others about – engage in active community campaigning, voter contact. But being a senator in Victoria for the last five years has also involved that kind of work – advocacy, speechmaking, school openings.

Favell: Any issues people in Batman have let you know about yet?

Feeney: I’ve made a point of visiting local schools so far. They have different challenges depending on the demographic profiles … but they are all delighted with the capital investment the Building Education Revolution provided. We should all pay tribute to Julia Gillard for that. But there are serious challenges around funding from state government. I’m keen to work with local council around public transport connections, particularly for Preston and Reservoir. They could be much more interesting public and retail spaces.

Favell: I see you are active on Twitter and recently commented on News Ltd’s bias against Labor.

The choice is clear pic.twitter.com/Bvp3a6f8lk

What can Labor really do to confront Murdoch’s domination?

Feeney: Not very much. We obviously have a free media in this country – and Rupert owns 70{17ac88c265afb328fa89088ab635a2a63864fdefdd7caa0964376053e8ea14b3} of it. Any progressive has watched with increasing alarm an ever more flagrant political edge to News Corporation. I think it coarsens the political debate and obviously makes life much tougher for the broad left of politics. But we don’t just have to suck it up. Part of my tweet and the broader conversation is to remind Australians that what they’re reading is in fact biased.

Favell: Can Twitter make a difference? Or is it just an echo chamber?

Feeney: As the media market fragments and people self-select their news sources, we need to be in that competition. I have 3100 Twitter followers and I often laugh that half of those are journalists and half are conservatives who only follow me to bag me. But Kevin Rudd has more than a million followers. Then you are really reaching a big audience.

Favell: Do you ever get offended by things people say about you online?

Feeney: I try not to, but I do. There are plenty of fascists, appalling right-wingers, with blogs which are little more than open sewers, who rush in and have a crack. But if you put yourself out there, it’s going to happen.

Favell: You are always referred to in the media as a ‘faceless man’. What does it mean?

Feeney: The Liberals first used this term about Labor in 1969. Tony Abbott was able to bring that old phraseology back to life in the aftermath of Julia Gillard becoming leader, essentially to create the notion that she was the product of the manipulation of a handful of people – of which it was said I was one. They want to paint the image of men, particularly blue-collar trade union men, scary, sinister shadowy figures, controlling the Labor Party. But I’ve always made the point that Julia was elected, on the first occasion unanimously, by 110 men and women, each of whom had been elected. And look, it’s just a line the Liberals use. You are not actually a faceless man if people have met you.

Favell: There was a lot of media around the Emily’s List advocacy for a woman to be selected for Batman. Can you address how voters might feel about another man being put into a safe Labor seat?

Feeney: I’ve always had a warm and constructive relationship with Emily’s List. There was angst on their part, quite reasonably, that mine was the third pre-selection in a row and no woman had been elected thus far. But I put myself forward as a candidate because I think I have a contribution to make. And I think everybody signs up to the Labor Party knowing it’s a party that wants to eliminate discrimination, whether it’s on the basis of race or sexuality or wealth or religion or gender. In recent days Clare O’Neil was selected in Hotham, a rolled-gold safe Labor seat, and I think that will go some way to satisfy women in the Labor Party, that there are some great opportunities for women of talent inside Labor.

Favell: Today Abbott announced Liberal preferences are going to Labor before the Greens. Does this improve your chances?

Feeney: Yes, it does. For the last decade we’ve watched Greens being elected on Liberal Party preferences – and we’ve been grinding our teeth. I’m not surprised by Abbott’s announcement. In the 2010 Victorian state election the Liberal Party, for the first time, changed their policy of preferencing to the Greens. They formed the view that they needed to stay true to their own conservative values. So they put the Greens last, because the Greens were the most extreme party.

Favell: Do you think that’s their reasoning, really?

Feeney: Yeah. This myth grew inside the Liberal Party that that act of principle, a rare thing for conservatives, helped (Liberal Premier Ted) Baillieu win the state election. So we’ve seen a steady momentum, because the Liberals nationally want to try to build themselves up as a party of principle rather than one of Machiavellian plotting. It’s obviously going to be a disappointment for the Greens, who have long been elected on conservative preferences.

Favell: So it wasn’t a deal between Labor and Liberal?

Feeney: No, no, I can positively assert that we have reached no agreement with the Liberals over preferences. We are not going to reciprocate.

Favell: You won’t be preferencing Liberals ahead of Greens?

Feeney: I can’t see that happening. In Batman, for instance, I would expect we will be preferencing the Greens ahead of Liberals.

Favell: What can you say to voters in Batman, which is full of people from all over the world, about Labor’s refugee policy?

Feeney: We have to stop our refugee policy being managed by criminal syndicates. They are ripping off desperate people and putting people’s lives at risk so they can begin an illegal journey towards Australia. Not only are these smugglers selling the prospect of Australian citizenship and they have no right to do so, but most distressingly they are packing people into unseaworthy vessels and we are watching many hundreds of them die. Australia, very generously by international standards, takes some 20,000, soon we hope 27,000 refugees a year. We want to be taking those people from refugee camps where the need is clear and the UNHCR are managing a refugee process. So we are in the very tortured position of needing to construct a policy which keeps faith with our own humanitarian and internationalist values, but which breaks the people smuggling model.

Favell: So, is there a climate emergency or not? Is this not a high priority any more with Labor?

Feeney: It certainly is. The Labor Party will stay committed to pricing carbon and finding local and global solutions to fight climate change. The proof of that is the amount of political pain we have endured. I served on the Senate Select Committee on Climate Change and I worked hard on the Carbon Pollution Reduction bills in 2009 and 2010. We watched the Greens and the Liberals vote together to destroy our initiatives – the Greens because our initiatives weren’t extreme enough and the Liberals because we had any initiatives at all – an axis of evil which struck down our attempt to take action on climate change. And then in more recent times we successfully priced carbon and are moving to an emissions trading scheme. Anyone who says our progress is too slow, I have sympathy with. But the Greens have absolutely no credibility here. They have assassinated policy in this area. Every time they talk about shutting down the coal industry, shutting down manufacturing jobs, all they do is help the conservative agenda of scaring people into thinking that action on climate change means job destruction – and it doesn’t.

Favell: Do you think that the coal industry needs to be wound down at all? How can it keep going if it is so polluting?

Feeney: The biggest challenge of this country is coal-fired power generation. So we have a renewable energy target. That means that we go around supporting wind farms. What happens when we try and build a wind farm? The local Greens group will complain that the windmills produce noise pollution. So, okay, we try to create solar initiatives, like one in Mildura – and what happens? The Greens complain that it’s on a special site, that the site should be different. You can’t just support these things here in Northcote or Preston, you actually have to roll up your sleeves and get these things done on the ground. That’s my frustration with that side of politics – they’re into slogans, not solutions.

Favell: Do you think it’s still a real fight between you and Alex Bhathal (Greens candidate for Batman), or do you think she’s out of the race now?

Feeney: I don’t think one and a half weeks into the campaign that anybody should be saying the race is over. There’s many weeks ahead of us. We are both people of passion and commitment, and I look forward to engaging in a good cogent, cerebral political debate over the next few weeks.