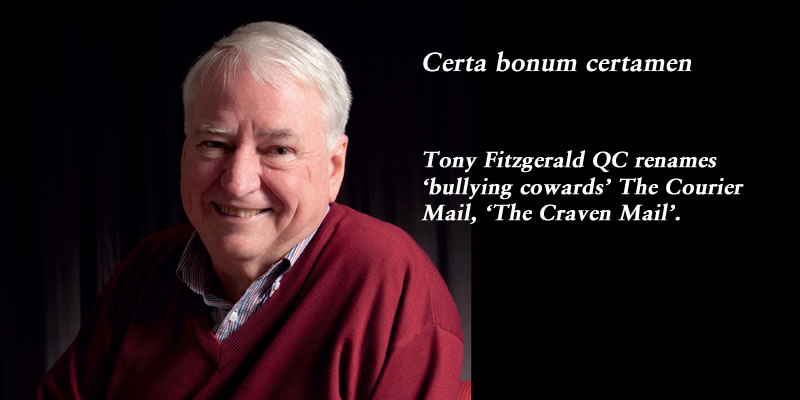 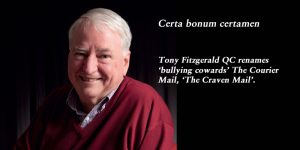 On Tuesday night, Queensland’s pre-eminent corruption fighter Tony Fitzgerald used his introduction to the biannual “Tony Fitzgerald Lecture” at Griffith University by Professor David Bayley to fight back against the The Courier Mail’s latest attack on his credibility. Having supplied a pre-scripted speech to the media before taking to the podium, Mr Fitzgerald surprised everyone when he veered off his notes to lambast the Queensland paper for being  pro-Newman Government.

NoFibs has obtained a transcript of Mr Fitzgerald’s remarks.

The Craven Mail by Tony Fitzgerald

Observations of mine in tonight’s program will again “irritate” the Murdoch media, especially Queensland’s own Courier Mail, which would be better called the Craven Mail since most bullies are cowards.

The Craven warrants a special mention for its pompous self-regard and gutter tactics. Its decent journalists must find it unsettling to work alongside rabid gossip mongers and an editor who has made the paper an object of derision for thinking Queenslanders by virtue of its debased tabloid standards and blatant pro-government and anti-intellectual bias.
A compulsion to harm someone whom you’ve never met because you dislike his opinions but can’t rebut them suggests a disturbing pathology. Last Saturday’s edition of the Craven contained another rambling smear under the heading FITZGERALD FAILURES HIT NERVE. The simple purpose of that inane statement was to highlight the key slur FITZGERALD FAILURES. The turgid content of the article includes a favourite Murdoch media theme, its self-perceived superiority, plus a truly momentous revelation of my failure by an acquaintance of Queensland’s recently appointed, totally unsuitable Chief Justice.

According to the Craven, its source, a retired journalist, conveniently told it that he and another retired journalist disagree with some of my decisions during the corruption inquiry. When my attention was drawn to this, it felt, to adopt former Prime Minister Paul Keating’s graphic phrase, “like being flogged with a wet lettuce”.

Since the inquiry concluded 25 years ago, it seems that the Craven’s informant thinks and acts quite slowly. The compelling reasoning which underpins his lethargic opinion can be discerned in his tragic lament: “I gave Fitzgerald (transcripts of) phone taps on who ran what in organised crime in this country. He didn’t pursue it. He never even looked at them as far as I know”. That and similar self-focused drivel provided the Craven’s malicious hypocrites with a spurious foundation for their latest spiteful ambush.

The hatred and lies of those whose criminality, misconduct and incompetence I exposed, their fellow travellers and lackeys and miscellaneous far-right lunatics and conspiracy theorists have continued since the corruption inquiry. It diminished to some extent after 1998 when I retired as President of the Queensland Court of Appeal and left the State for a period, but it has built up again following my public opposition to the current government’s attempt to reverse the post-inquiry reforms and return the State to its previous dark era.

I’d prefer to disregard the abuse, but I don’t want my silence to encourage bullies like the Craven or discourage others, especially young people, from speaking out against powerful vested interests. The Craven’s strident partisanship provides a useful reminder to any who might be interested that any possibility of effective democracy will be lost if we allow ourselves to be intimidated and silenced by reactionary, self-interested politicians and media riffraff.

More immediately, it’s my privilege and pleasure to invite Professor Bayley to share his knowledge with us. He has possibly already noticed differences between life in Brisbane and New York. Here, our self-proclaimed experts, the Premier and the Attorney-General, who believe that they and their Police Union allies know all there is to know about crime and criminal justice, tell “the people” that “common sense” and the “real world” knowledge that they’ve gained, presumably by osmosis, at “schools of hard knocks” are far superior to education and evidence-based knowledge. Perhaps they think that the School of Criminology and Criminal Justice is an “ivory tower” for an over-educated “elite”. My contrary, “irritating” opinion is that even our local know-alls could improve their prospects of developing workable responses to bikies and other organised criminal gangs by listening to renowned experts in policing and crime-prevention.

Your learning and experience are briefly summarised in the program, Professor Bayley. Thank you for coming here and sharing your insights with us. 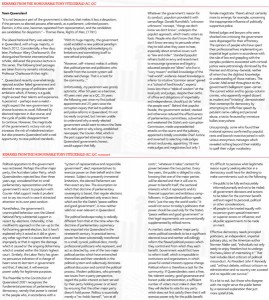