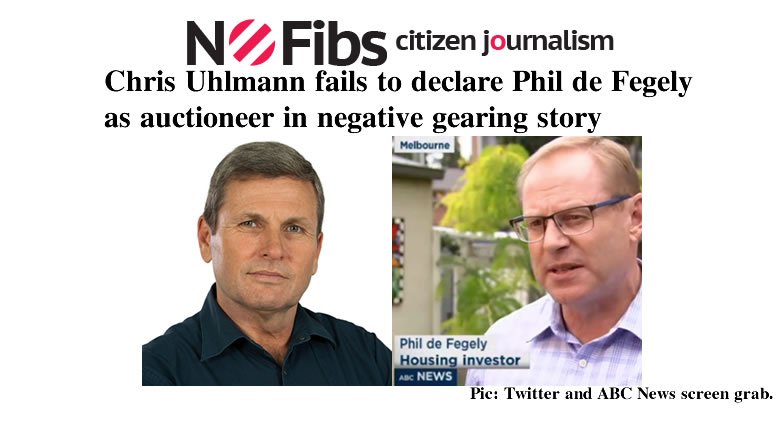 An auctioneer interviewed on an ABC negative gearing news story was presented as an housing investor. 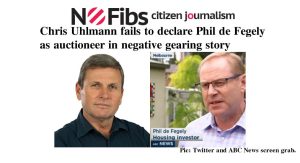 However, a quick Google search showed Mr de Fegely is actually an auctioneer and coach for new auctioneers with his own business promoted at his website, http://defegely.com. Mr de Fegely was also interviewed in 2009 by James Market News in which he gave his thoughts on the art of auctioneering bidding.

NoFibs is not suggesting any wrongdoing on the part of Mr de Fegely who was only asked for his opinion on negative gearing by the ABC.

In the interests of transparency and the further encouragement of public debate around the negative gearing issue, more about Mr de Fegely should have been revealed by the ABC. The footage only leaves viewers with the impression that he was a small housing investor with no other interests in the property market.

NoFibs has sought comment from the ABC Audience & Consumer Affairs department through the standard issue process.

You can watch the full news item here:

In a response from Reena Rihan from the ABC’s Audience and Consumer Affairs, the disclosure of Mr De Fegely as an auctioneer was “not material to the report”.

“In accordance with the ABC’s complaints handling procedures, your correspondence has been referred to Audience and Consumer Affairs, a unit separate to and independent of the content making areas of the ABC. Our role is to review and, where appropriate, investigate complaints alleging that ABC content has breached the ABC’s editorial standards. The ABC’s editorial standards can be found here: http://about.abc.net.au/reports-publications/code-of-practice/.

Audience and Consumer Affairs have reviewed the report and assessed the contents against the ABC’s editorial standards for accuracy which state, relevantly, in part 2.1: Make reasonable efforts to ensure that material facts are accurate and presented in context.

The report clearly stated that Mr De Fegely was a small investor who owned two properties, this information was materially relevant to the report and was presented in the appropriate context. Audience and Consumer Affairs are satisfied that Mr De Fegely’s profession was not materially relevant to the report and did not need to be included in the report. Nevertheless, please be assured that your concerns have been noted by our unit and ABC News.

Should you be dissatisfied with this response, you may be able to pursue your complaint with the Australian Communications and Media Authority (www.acma.gov.au).

Thank you again for contacting the ABC with your concerns.