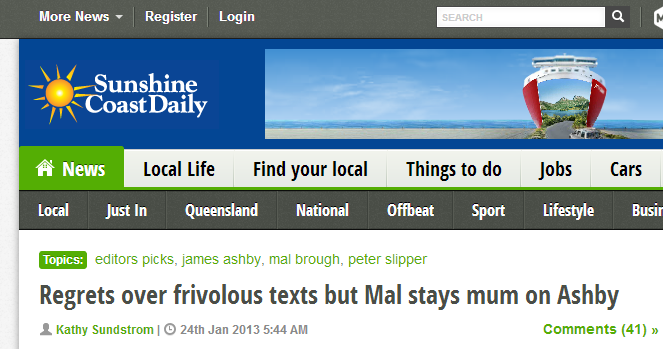 In the interview Mal Brough claims that he is unable to comment in detail on the Ashby matter because as he says: “The matter is before appeal, I have nothing further to add,”
However the Federal Court’s Justice Rares decision stands as good law unless & until the original decision is overturned, set aside or altered on appeal. There has been no leave to appeal granted at this point.

Mal Brough, when asked why he has not responded to requests for interviews, suggests no one has asked. “I am available on my mobile“.
This is incorrect. Our citizen journalist Noely Neate got confirmation from at least three journalists below who tried.

.@YaThinkN Indeed – ABC has made several interview requests without success.

Journalists, here is a chance to learn the issues of veterans direct, and to quiz Brough on his fitness to seek to represent the people of Fisher:

Mal Brough will be at a Veterans’ Forum with Senator The Hon Michael Ronaldson Shadow Minister for Veterans’ Affairs on 29 January 2013 – 10:00 am to 11:30 am
at Buderim War Memorial Hall Cnr Gloucester Road and Main Street, BUDERIM 4556

Time to ask Brough some real questions about Ashbygate

Re: Your paper’s impending interview on the train with Mal Brough this week

I am a former political journalist who co-publishes the citizen journalism project Australians for Honest Politics. Today a Sunshine Coast resident pointed me to a story in your paper yesterday quoting Mr Brough and announcing his agreement to accompany a reporter on a return train trip Sunshine Coast to Brisbane next week (http://m.sunshinecoastdaily.com.au/news/only-three-mps-will-go-the-journey/1723681/).

As you would be aware, Mr Brough has refused all media interviews since the Federal Court handed down its judgement in the Ashby case on December 12 last year. It thus appears that your paper now has exclusive access to Mr Brough, and therefore the potential to create national news with your pending interview.

In addition, Mr Richard Ackland, among others, have noted with concern that large media groups have failed to pursue the #Ashby matter since the judgement. As he wrote in the Sydney Morning Herald on January 18 before detailing some of the unsolved mysteries of the matter (http://www.smh.com.au/opinion/politics/surely-the-coalition-smell-hasntevaporated-20130117-2cw5l.html):

The investigative bloodhounds of the press have let Tony Abbott and other leading Coalition ornaments off the hook. There are still so many loose threads dangling off the James Ashby case it is amazing that those dedicated to holding politicians to account have let this one pass…

In addition, in light of the adverse findings against Mr Brough by the Court, Labor MP Graham Perrett has asked the Australian Federal Police to investigate whether Mr Brough has breached three sections of the Criminal Code and Crimes Act, including the procuring of unauthorised access to Mr Peter Slipper’s diary (http://resources.news.com.au/files/2012/12/22/1226542/306440-hs-file-perretts-letter-to-afp.pdf).

To be honest, me and many others envy your paper’s unique opportunity to inform the Australian public about this matter through your opportunity to question Mr Brough at such length. I thought you may be interested in questions members of the AFHP citizen journalism project would most like answers to and hope our input helps your reporter prepare for the interview.

1. What information regarding the diaries did you receive from Ashby?

2. What dates did it cover?

3. Why did you want the information?

4. What use did you make of the information?

5. Do you consider it ethical to gain unauthorised access to someone’s else’s diary?

6. What action would you have taken as a sitting MP if your diary was stolen and given to a political rival?

7. Have you had any contact with the AFP since the judgement?

Personal help for Ashby and Doane

8. Did you discuss getting employment for Ashby and Doane?

9. What steps did you take to assist them?

10. Did you know Ashby or Doane before they began working for Mr Slipper?

11. What did Ashby tell you re any possible legal action against Slipper?

12. Why didn’t you advise Ashby to follow standard and correct HR procedure if he felt he was being harassed?

13. What contact have you had with Ashby, his lawyer, agent or anyone else connected with the Court case since the judgement?

14. Do you believe Ashby is an honest person, and if so on what basis?

15. What dealings did you have with Steve Lewis?

Other dealings on the matter

17. What meetings in 2012 did you arrange or attend which mentioned or discussed Ashby, what was discussed in each and who else was in attendance.

18. To which LNP or Liberal party MPs did you give prior notice of the Ashby Court action? Which had prior knowledge, to your knowledge?

19. Have you had any contact with anyone from Ashby’s lawyers in the Court case?

20. Do you have any knowledge of who is paying Ashby’s legal fees?

21. Did you take any steps to help fund the case?

22. Who is funding Ashby’s appeal?

23. Have you read the judgement by Justice Rares?

25. Why haven’t you issued a detailed response to the judgement?

Your public statements about your involvement

26. Why did you tell the Australian people when first asked about this matter that you had no involvement?

27. Please explain why you then misled the Australian people about the extent of your involvement? See http://www.crikey.com.au/2012/06/27/ashby-is-no-grech-momentunless-youre-mal-brough/

Twice now Brough has been revealed as having misled the public over his role in the affair. The first time was in early May when, in the aftermath of Fairfax’s Jessica Wright outing him as having met with Ashby, he arranged a tell-all explanation to The Australian, complete with photo shoot with his wife, to explain he’d met with Ashby three times and had only spoken to a small number of trusted legal advisers about the matter, and not anyone else in the Coalition or LNP.

That marked a change from his position of just a few days earlier, that claims he was aware of the legal action beforehand were “nonsense”.

Several members of the AFHP citizen journalism project are lawyers, and would be glad to discuss these questions or other details of the Ashby case with your or your reporter should you so wish.

Good luck with the interview! 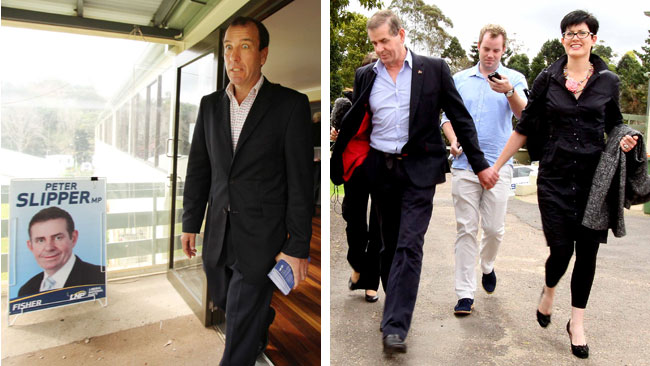 Thank you for your emails and correspondence regarding our campaign to fix the train service between Brisbane and the Sunshine Coast.

I have forwarded your list of questions to our journalist who we have assigned to ride the train to Brisbane with Mal Brough.

Thank you. I look forward to your journalists’ report, and hope your local paper trumps the big media which has failed to ask the tough questions so many Australians want answered.

We have one of our best and most fearless journos on this one so I know she won’t be backward in coming forward.

Brilliant! Locals tell me you have a great record in ensuring the Sunshine Coast’s politicians are accountable to the people.

Thank you very much for the lovely feedback.
Our journo is now working on a big package of stories for tomorrow’s print.

Would like to meet her one day. Cool under pressure.

Darren, your leadership and your reporter’s intelligent professionalism is an ornament to journalism. Her style was perfect. I was beginning to despair – now I take a break with relief.

Please pass on my congratulations and respect to Kathy.

Regrets over frivolous texts but Mal stays mum on Ashby 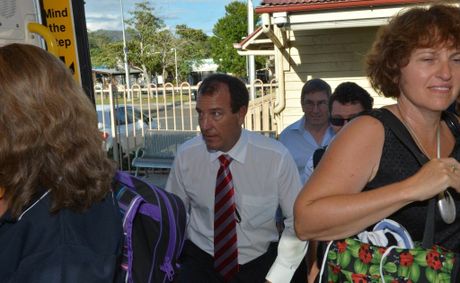 Six years out of parliament, he [Mal Brough] has not lost his political charisma.

But hanging over his head are the questions about his invovlement in the James Ashby saga that everyone has been trying to get him to answer.
The topic comes up innocently as we discuss the benefits of Tweeting, Facebooking and the dangers of sending a message that be on record forever.

“You send a frivolous message and in a couple of years time it could come back to haunt you,” Mr Brough says. I say, “Yes, we know too well how that has happened”.

“The funny thing was the five texts (concerning his involvement with Ashby) were still there because I didn’t delete them. I wouldn’t have known how,” he says casually.

It provides an opening to the Ashby saga and the Australian Federal Police investigation into whether he has breached three sections of the Criminal Code and Crimes Act.
He suggests there is “nothing to talk about”.

“It’s run its course,” he says. I bring up the series of questions a journalist from Australians For Honest Politics, among others, have been trying to get him to answer, which I whip out of my handbag.

“I have a list of questions for you from a concerned journalist,” I say. “I’ve seen those questions,” he says.  And then begins what will become his party line. “I’ve answered everything in relation to James Ashby.”

I ask why he has not responded to requests for interviews. He suggests no one has asked. “I am available on my mobile,” he says.

This is true. My colleagues and I had no problems reaching him to arrange the train trip. We leave further discussions till we get off the train. A crowded compartment is not the place.

Mr Brough is gracious, agreeing to talk privately at the metal bench at Central Station. We talk more about rail and then switch to a topic his body language shows he would rather avoid.

I ask if we can talk about Ashby. “What’s your question?” he says. I say he has seen the questions sent in by the AFHP, so why won’t he answer them?

“Peter Slipper is the … has got to answer to the court on 16th or the 15th,” he says, stumbling over his words until he finds his favourite line.
“The Ashby matter is still under appeal with Mr Slipper. I’ve said everything I have to say; there is nothing more I need to add.”

I ask whether he thinks it is something that should be addressed with an election campaign coming up.
“I have addressed, in full, my involvement with the matter and there is nothing further that I can add,” he says.

I ask whether this (his addressing the matter) was before or after the judge specifically pointed fingers at him.
“The judge never pointed any…” He stops and then continues again. “I’m not going to go with the judge, the matter is before the appeal, I have nothing further to add.”

I ask whether he will talk about it after the appeal, but it’s a waste of time.  “The matter is before appeal, there is nothing further to add,” he says again.

I ask if he thinks it could affect his chances of being elected. “The matter is before appeal, I have nothing further to add,” he repeats.

I say, “Come on”, he has to accept people’s concern about this issue.
He says, “That’s it” and then adds the line once more: “The matter before appeal nothing further to add”.