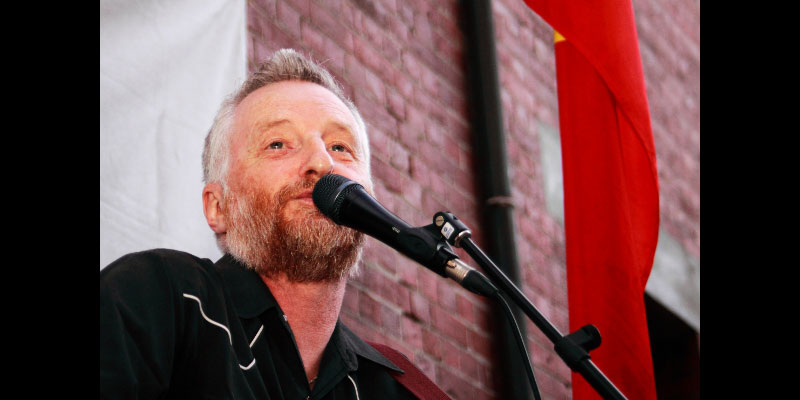 After hearing rumours Billy Bragg (@billybragg) would be performing at one of the March in March (MiM) events, I contacted his publicists in both Australia and the UK hoping to get a few words out of the legendary musician and social justice campaigner.

At about the same time I got confirmation Billy would be speaking and performing at Sydney MiM, I also received an apologetic knock-back from his publicists. I didn’t really think I’d get a shot, but there was no harm in trying.

A few minutes later an email dropped into my account – “Pretty much self explanatory … I suggest you print this email and take it with you (passports are us).” A local unionist I interviewed in Indi during the federal election had managed to get my name placed on the door at an intimate union event in Melbourne where Billy Bragg would be performing.

After a lot of woo-hooing I took off down to Melbourne hoping to get some words out of the man who’s penned some of the most inspiring lyrics of the past 30 years.

Everybody knows Billy Bragg has been a solid supporter of the union movement his whole career. So it was no suprise almost every unionist at the event wanted to shake his hand or have their photo taken with the legend, and apart from me, they were all unionists.

My Question – Why did you decide to throw your support behind March in March?

March in March is grassroots, people on the street expressing their anger. It’s what we need.

Now here’s the thing, it was great hearing a short set from one of the world’s greatest singers of protest, it’s what he had to say before he played that made the six-hour return trip worthwhile.

We survived Thatcher by standing together.

Suggesting that’s how the union movement can repel Tony Abbott’s witch hunt. He urged everybody to stand with “women on the internet who are subject to the most vile abuse simply for having an opinion.”

Billy Bragg was always going to support March in March, it’s what he’s been singing about for 30 years – power to the people.

Read More from the March In March Archive