Thursday was a long night with negotiators working on a draft text released at 9pm Thursday evening. Friday was set aside for bilateral discussions. A new text is due on Saturday morning. There is still much at stake in these negotiations, and we will not know the full final outcome until the gavel goes down sometime over the weekend.

Greenpeace released a statement on Thursday night based on the 9pm draft text. Martin Kaiser, head of international climate politics at Greenpeace, said:

“This thing isn’t over until the conference closes, but what’s on the table just isn’t good enough. It’s a very big problem that the emissions targets on the table will not keep us below 1.5 degrees of warming and this draft deal does absolutely nothing to change that. Right now we’re witnessing a display of international impotence. This text should say that countries have to come back soon with better numbers but instead it kicks that can down the road, saying we’ll sort it in ten or fifteen years. That’s too late, they’re closing the door on our best chance to dodge dangerous warming.”

There has been a lot of discussion about use of goal terms like zero emissions, carbon neutrality, net zero carbon. This current draft uses the term ‘greenhouse gas emissions neutrality’. “Why can’t this conference just say it like it is, that we need to quit oil, coal and gas by 2050 at the latest? And why is there only one mention of the word renewables, and only in relation to Africa, when renewables will clearly come to dominate this century?” said Kaiser.

The removal of explicit human rights in the operative text has raised serious concerns, although references to human rights are at the moment still retained in the preamble. This DOES make a big legal difference, I am told.

The big talking point at this conference was the importance of the 1.5 temperature limit and inclusion of this in the text. This was the big surprise. And so many countries endorsed the inclusion of this limit in the text, although we are yet to see our countries will implement policies to achieve this target. 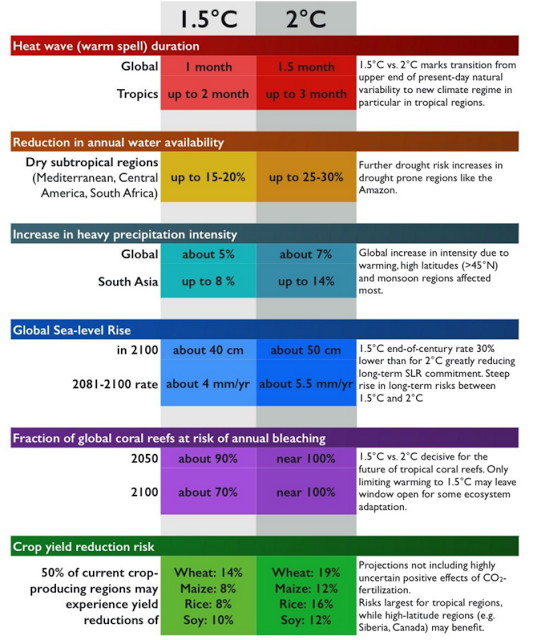 Comparing the impacts of 1.5 and 2 degrees of global warming

A large number of representatives from across civil society gathered at the COP21 Eiffel Tower at 3:00pm on Friday to form a giant red line down the Champs Elysees corridor in the center of the UN climate summit. Activists formed the line with over 40 meters of red fabric.

Immediately before this action, youth activists from inside and outside the conference gathered outside at the front entrance with speeches, songs and chanting.

In the climate negotiations, a “red line” is an issue that cannot be compromised on. Civil society is drawing its own red lines: 0 Emissions, Equity, Finance, Justice, and Compliance. On Saturday, December 12th, the red lines will be taken into the streets for a major gathering with thousands of people along the Avenue de la Grande Armée near the Arc de Triomphe.

A major public demonstrations is planned for Saturday, 12th December in Paris.

As the climate talks come to an end, 350.org, Attac, Confédération Paysanne, Réseau Sortir du Nucléaire, Climate Games and others are taking the message to the streets at 12 noon (that is 12.12.12). It is a defiance of the ban on public protests that has been implemented in France under the State of Emergency. Campaigners say thousands may attend.

The protest will start gathering at 11am at the Avenue de la Grande Armée, Arc de Triomphe.

According to the statement, “the start of Avenue de la Grande Armée is the Arc de Triomphe and the grave of the unknown soldier. We will use this place to commemorate known victims of climate change (past and future) and pledge our commitment to continue the fight for climate justice. Thousands will stand along the Avenue to draw a red line with their bodies, signifying our commitment to defend our common homes. The line will point towards the real perpetrators of climate crimes in La Défense, where the headquarters of major fossil fuel companies and their financial backers can be found. The action will be a reminder that there is no complete triumph in the battle against climate change–too much has already been lost–but that any progress will be led by the people, not our politicians.”

Greenpeace have already done some decoration as the Paris climate conference enters the closing stretch, with thirty climate change campaigners taking to the top of the Arc de Triomphe to push for a renewable energy future. On the traffic circle and the streets around the Arc, dozens more activists are painting the roads yellow to create the image of a huge shining sun.

Another event is also planned at the Champs de Mars near the Eiffel Tower at 2pm.