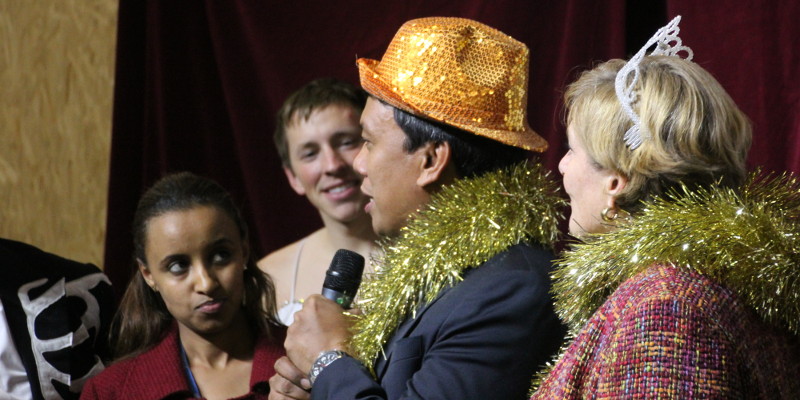 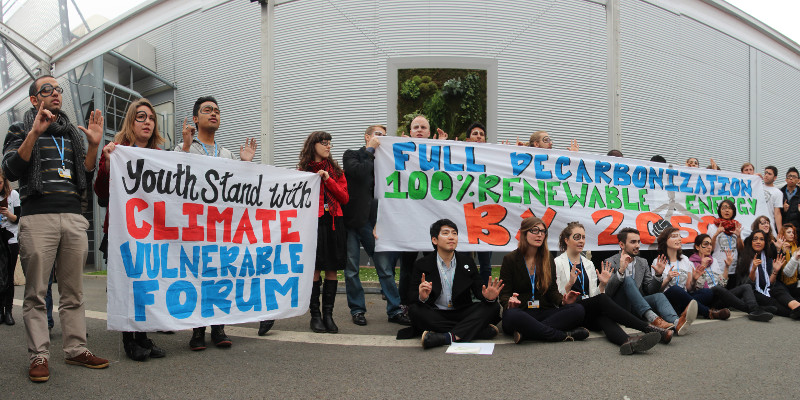 The statement by the Climate Vulnerable Forum on Monday evening showed the world what climate leadership really is.

The Climate Vulnerable Forum Adopted The Manila-Paris Declaration (PDF) and committed to zero emissions by mid-century and 100 per cent renewable energy decarbonization by 2050. The leaders of 30 nations, some of them the most vulnerable to climate impacts, were determined to keep the world on track for below 1.5 degrees of warming.

“Individually, we are already survivors; collectively, we are a force towards a fairer, more climate-proactive world,” said Philippine President Benigno S. Aquino III.

“We refuse to be the sacrifice of the international community in Paris. Anything that takes our survival off the table here is a red line. All parties have an obligation to act. Not doing so is a crime. This Declaration is just the beginning of our efforts to step up our voice and collaboration,” said Anwar Hossain Manju, Hon. Minister of Environment of Bangladesh, in a statement on the Climate Vulnerable Forum website.

Watch my unofficial video of the full presentation by comedian Dan Ilic:

Fantastic award at #COP21, the #RayoftheDay went to @TheCVF for bold call to #go100percent and Full Decarbonization by 2050

…and another video on vulnerable countries stepping up:

On Tuesday the United States youth group SustainUS organised a show of support by Youth leaders at the COP for the renewable energy and decarbonization goals of the Climate Vulnerable Forum. 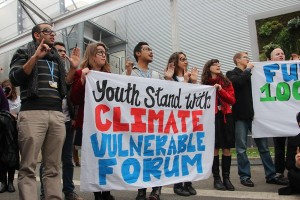 Protests of these are allowed in the UN Blue Zone but only after a process of registering and approving the event so that UN security are aware of the details. The UN secretariat do not like surprise protests, and participation in unauthorised protests is liable to get you immediately kicked out of the conference and your pass revoked.

Authorised protests allow an outlet for expression and frustration, particularly by youth and civil society representatives. It allows the groups to perhaps gain some small amount of media coverage.

The main walking avenue between all the halls is called the Champs Elysee and that is where the protest event was held.

One of the participants was Sadar Aryal, 20, from Nepal, Coordinator of Climate Strike and Founder of the Sano Sansar Initiative. He explained in an associated media release: “Growing up in foothills of the Himalayas, I was 10 years old when I realised the urgency of climate action. I began to see the mountains melt, glacial lakes flood, and the human impacts of the climate crisis on the 2.3 million people who depend on it for fresh water and natural resources,” he said.

Many of the young people had circles painted around their right eye. This was to symbolize zero fossil fuel use by 2050. This is a necessary target to aim for to keep warming below 1.5℃.

The vulnerable countries haven’t caused most of the greenhouse gases causing global warming yet they will reap a disproportionate amount of the climate impacts. The youth leaders demanded that transition should reflect the historical and current responsibility of developed countries to lead by commencing an immediate phase out of fossil fuels and providing finance and technology to aid developing nations.

The youth leaders want to see also see as important that the transition to renewable energy within countries ensures support for workers and fossil fuel dependent communities.

“For this goal to become a reality, developed countries must act first and fastest to eliminate carbon emissions. As American youth we call on the United States to transition to a renewable energy economy well in advance of the developing world.” said Dyanna Jaye, 23, COP21 Delegation Leader of SustainUS and an organizer of the event.