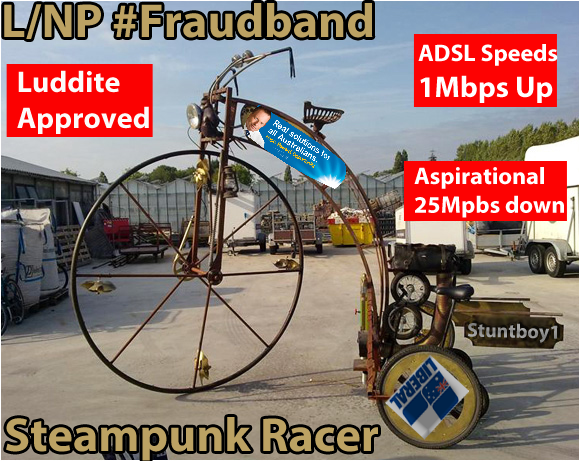 Taken at the Coalition Bikeshed – Created by The Geek

Editor’s note: Steve Jenkin is a geek who wants to make the NBN tech stuff accessible to all. He has agreed to be a @NoFibs contributor. so feel free to ask your NBN questions as a comment.

The volume of words written and spoken about the NBN must startle many, producing far more heat than light. Is this a case of the “Bike Shed Effect” where trivial decisions dominate the discussion and the biggest decisions seems like an after-thought?

It’s complex, but we shouldn’t be having this debate at all: Frank Blount, Telstra CEO 1992-1999, forecast the customer network would be all Fibre by 2010. What happened on the way to the Future?

This three-way tussle is at the heart of the problem: Telecommunications is highly regulated in Australia because it has to be with single large player, Telstra, that can commercially block anyone else, as we saw with cable TV. For the ALP to pursue its broadband policy, it had to first deal with Telstra, deal fairly with its shareholders and create an environment where Telstra was happy and unable to block the new initiative.

There is a huge irony in this debate, each side of politics feels like the other is setting the agenda and dictating terms of debate while the commentariat vigorously defends their personal favourites from the sidelines.

Labor has defined the technical needs debate, “Fibre or not?” forcing the Coalition to respond on those terms with its policy.

The Conservatives have defined the use debate, “What is the real consumer demand?”, usually translated to “How much speed is enough?”, forcing Labor to respond on those terms.

The NBN as a topic is a BBQ conversation stopper for these reasons. Instead of people discussing “What exciting new things can be done in health, education and shopping?” or “Can I get real cable TV?” or “What extra cool things can the kids do with it?”, we get the policy that dare not speak its name. Everyone has an opinion, even if its “Don’t talk to me about that!”.

Why neither side can get cut-through is that both customer demand and need are unknown. Will most premises need 100Mbps or better in 10-15 years time? No idea.
Will most paying customers pay the extra to get Fibre? No idea.

When the experts don’t agree on the technical issues (Is fibre the one true future network?) then how can politicians and the public be expected to make sense of the arguments? I think its because the wrong questions have been asked and different issues conflated or confused.

Nobody disagrees with the proposition that Fibre is the only commercially viable solution to higher speeds, longer distances and hostile environments that degrade copper. That’s only a proportion of the market, at most 25{17ac88c265afb328fa89088ab635a2a63864fdefdd7caa0964376053e8ea14b3}. What to do?

One way to cut this gordian knot is to not focus on the technical/demand issues that have us so mired in unproductive debate, but just look at the deals on the table from each side.

Here are the headline costs of the deals. Even “premises” is hard to define. Is it the number of single & multiple dwelling units in all “Service Addresses” passed, the number of premises connected or the number of services in active use, collecting rent? Premises can be new, or “Greenfield” versus existing buildings or “Brownfields”. Both sides intend all new estates of 100  or more premises will be connected with fibre.

$94 billion or $7,705 per premise: The worst-case scenario for NBN Co claimed by the Coalition.

There is a difference between “Capital Expenditure” (CapEx, also OpEx, or Operational Expenditure) and the total cash injection required. (The Coalition uses “Funding”).

The CapEx is the value written in the books for the long-term investments that can be depreciated: what the income producing asset cost to buy and install.

Because the network can’t be built & attain full-revenue in one year, it incurs losses until it reaches break-even, when revenues exceed expenses. The full investment is the CapEx plus losses incurred until  break-even.

Only that’s not the whole story:

What of the $7,750 “worst-case” scenario claimed by the Coalition? It’s no more than Political Spin.

The more interesting scenarios nobody has run: What if the full Fibre network does really well?

Early results are that the NBN Co Corporate Plan was understated, usage and revenues are running ~50{17ac88c265afb328fa89088ab635a2a63864fdefdd7caa0964376053e8ea14b3} ahead of projections. “Surprises” can be both good and bad: Consumer demand is unknown, but may run well ahead of forecasts. Internet usage has grown exponentially for nearly 20 years, why is it going to stop now?

If the NBN turns into rivers of gold, can the Coalition Plan accommodate that?

Both pieces, but mainly Renai’s at Delimiter, are worth a read, but don’t spend more than 90 seconds of your life on the Coalition FAQ, not if you have any self-respect.

While I intend to respond in detail to the “FAQ”, or rather what’s not there, here’s a first response:

Why would anyone give any credence to Dorothy Dixer questions self-selected and answered by a Barrister-turned-Politician? To say they’d be misleading and self-serving would be a gross understatement.

Turnbull et al have concocted these “Questions” for very particular reasons, none of which are to do with enlightening the public or explaining his plan. Here’s the real question Turnbull needs to answer:

If he had communicated his plan well in the first place 2 weeks ago, why does he now need to “answer” twenty-two questions, expending 3500 words?

This FAQ is actually a demonstration of a seriously failed communication. But then, his policy launch, writing and interviews haven’t been about informing or debating, rather muddying the waters and disinformation.