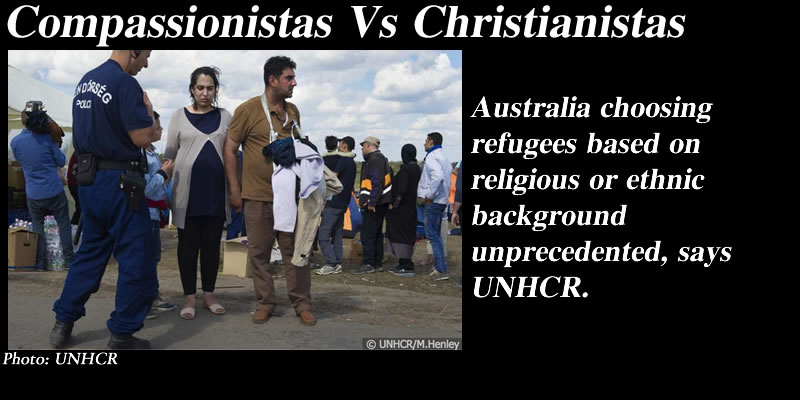 The Australian’s Chris Kenny has used the word “compassionistas” to decry people of “moral vanity” who responded to the current Syrian refugee crisis yet seemingly ignored the deaths at sea under the Rudd-Gillard-Rudd Government. 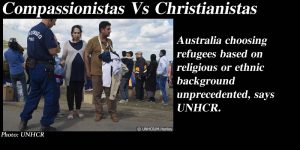 Kenny wrote, “The moral poseurs – or compassionistas as I have called them – are at pains to show us their compassionate virtue but they offer no practical solutions to a difficult policy issue.” Read more.

Much of the debate over Twitter in recent days has been around how compassionate a nation Australia is. The Refugee Council of Australia agreed with The Daily Telegraph columnist Miranda Devine that Australia was the most generous but only if you precluded from the statistics all the countries hosting refugees.

Only when you preclude all the countries hosting refugees eg 1.6 m in Turkey. https://t.co/vbbhWDJVSc https://t.co/IqxvpbEpba

Devine later backed down to claim Australia as third most generous in the Compassionista Olympics.

Yet despite Australia’s compassionate nature, the push appears to be on for the country to take in Christian refugees over other groups. Syrian Christians make up about 10 percent of the population, according to Central Intelligence Agency reports. Both Liberal Senator Eric Abetz and Liberal Senator Cory Bernardi have backed the move for Christians to be given priority due their heightened level of persecution. Sydney’s Catholic Archbishop Anthony Fisher also called for Christians to go to the front of the queue.

'Fleeing Christians should go to the front of the queue'. http://t.co/oKeuIjHuOM pic.twitter.com/6wr1zT4WWB

“Christians are the most persecuted group in the world” says Senator Eric Abetz.

However, Chief Communications & Spokesperson for the United Nations High Commission for Refugees Melissa Fleming said that selecting people on the basis of religion or ethnic background would be unprecedented.

She told ABC News radio that, “We operate under a completely non discriminatory basis.”

“It is up to the individual country to screen the candidates that UNHCR has put forward but we’ve never had a case where countries were systemically only choosing people based on their religious or ethnic backgrounds,” she said.

Listen back to Melissa Fleming here.

In his press conference announcement, Prime Minister Tony Abbott didn’t specify any particular groups that would be preferenced as part of the 12,000 Syrian refugees destined for Australia. He did say that the most persecuted women, children and families would be transferred from refugee camps in Lebanon, Turkey and Jordan.

“Resettlement prevents people from having to take dangerous journeys and risk their lives,” she said.

On Wednesday, Abbott announced that Australia would resettle 12,000 refugees fleeing the conflict in Syria and Iraq, on top of the existing 13,750 humanitarian intake.

The social services minister, Scott Morrison, said Christian Syrians would make up the bulk of the intake.

UNHCR's resettlement selection is based on specific needs & vulnerabilities, not on any other factors. https://t.co/wNGKoa7Wq2