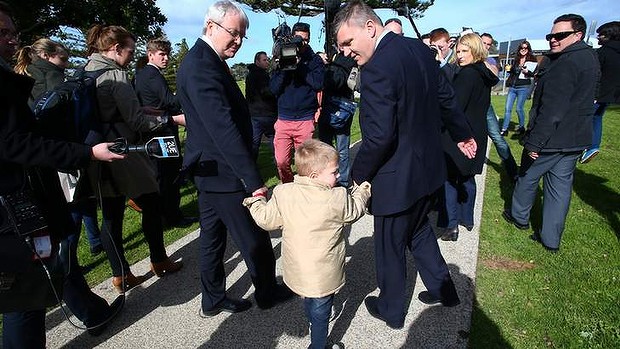 Later that afternoon Darren headed out to the South Barwon Civic Centre in Belmont for a 5.30pm debate with his Liberal counterpart Sarah Henderson organized by the local newspaper, the Geelong Advertiser. You can read the Addy’s report on that here and also my live tweets from the debate here. I had contacted Darren’s media advisor requesting an interview with him after the debate.

At the conclusion of the debate, which got a little rowdy at times, Darren and I stepped to the side of the auditorium to record the following 15 minute discussion. A small crowd gathered around us and even as I left there were several people wanting his ear for their concerns. I felt for him, and for Sarah, who was also fielding queries from those who’d decided to hang back.

Campaigning must be exhausting and taxing, on not only candidates but their families and support people. Darren is married and has two small children. What a life.

A lot of people are sick of the election campaign but I cannot even begin to imagine what it must be like living and breathing it every waking moment and trying so hard to ensure you can get your message out to people so they’ll vote for you come Election Day.

When did you decide you wanted to be a politician?

I’ve been interested in politics since the early 90’s. I used to love watching Parliament with people like Paul Keating, Barry Jones, Bob Hawke and that generation, so the Hawke Government and their Liberal party contemporaries, which were Peacock, Howard. I guess I was a bit different at school in that I liked politics and liked watching it and others liked more general news stuff, and sports.

I liked that robust debate of that time when it was no holds barred and from that I guess I started developing an interest in politics. My Mum’s a nurse, she has really strong social values about equity of access in a sense of hospitals and she installed some values in me that no matter if you’re from a privileged background or if you’re poor if you need access to health you ought to have that opportunity. So I learnt that from Mum. My Dad worked for Melbourne University, he was a workplace delegate and I learnt from him the power of workers balancing the power arrangement in the workplace, because obviously bosses have lots of power and workers as individuals don’t. If they come together the power dynamic can be equaled up and hopefully then, through negotiation, at least the starting point is even between the workers and the employer.

I guess from those early lessons it led to me joining the Labor party when I was 17 or 18 or thereabouts and from that I got involved in local government. I got involved in student politics. I’ve been the Finance Director of the University of Ballarat Student association. I was involved in the university council, the academic board and those kind of institutions where I would be making representations for other students who felt they were being poorly marked or poorly judged by their lecturer, sometimes they hadn’t been, sometimes they had been, so I learnt advocacy skills and making representation and sometimes the person you are representing, their case is not real strong but you’ll give it a fair go. I got involved in that and from that it was suggested that Labor needed a state candidate for Polwarth, which is out in the western districts. So I took 4 or 5 weeks off, with no expectation of winning that seat because it is one of the safest seats in the State Parliament as it is very conservative. It is up around Colac. I did reasonably well for Labor.

Well it’s more similar to 2010 than 2007. I think we set the agenda. I think this is the 3rd election in a row where I have set the agenda locally. I am pleased about that.

Is being experienced as a Parliamentarian helping?

Grassroots politics and what you do in the electorate is very different to formally giving a speech in Parliament and doing your parliamentary enquiries and those sorts of things. This is more like local government. I don’t mean that in a council sense, but it’s far more real. When you’re in the Parliament giving a speech there might be a few people listening but there will probably be no-one in the Parliament listening to you so you’re debating against yourself, except for question time. That’s a lot of theatre up there and it is what it is. It’s part of our democracy and it’s our most important institution but down here it’s much more about shaking hands, talking to people and having a discussion and talking things through with different groups that might have vested interests about something or another.

What is your proudest achievement for what you’ve achieved for the people of Corangamite in the last 6 years?

The launch site is here so we’re going to learn, in terms of how the public policy roles out, we’re going to learn in our region. We’re going to be the guinea pig, which is a great thing. Our region put its hand up and advocated to have it. Hopefully we get it right, but we’re certainly going to learn and there’s going to be substantial learnings that come from it and they will be rolled out through the rest of Victoria, so that’s good. But backing it in, again with the support of the community, to advocate for the National disability insurance scheme’s head office to come here is really important. It’s not important just for the 400-500 jobs that will come directly as a consequence. It builds on Geelong becoming a centre for public sector administration and excellence and the fact that having the DisabilityCare headquarters here means we’re going to be at the forefront of innovation in the disability space. We’re going to have the experts here at the head office. They’ll be in close contact with Barwon health, with Deakin University, so there’s innovation that will come from that and to see Geelong at the forefront of that policy reform is a fantastic thing.

I’ve read an online blog* from someone in Corangamite and she as a Labor person looking at you,  and thinks that you’re focusing on Geelong and the Bellarine peninsula and she thinks you’re forgetting some of the regional towns closer to the border of the Corangamite electorate. Do you have a response to that?

I’m not sure where she is from, it is very hard to respond to a generic thing but this is a seat that covers 7000 sq kilometers, it covers 100,000 voters, a population of 130,000 (with children and non citizens). So it’s a very diverse, large electorate. We’ve got out on the Bellarine Peninsula in terms of the bit within my seat, probably about 15-20,000, down on the surf coast 15-20,000, Colac and that part of the world 12,000, we’ve got up in the top part of the electorate, Linton, Dereel, places like that, the part of the world I grew up in, we’ve got probably about 2000 and then we have, out of the 7000 square kilometres we probably have about 5000 of those square kilometers where there are big open farmlands and the nearest community of interest or the local town might be 15 or 20 minutes. So it’s really hard to respond without knowing.

Do you accept that you’re focused primarily on Geelong and the peninsula? 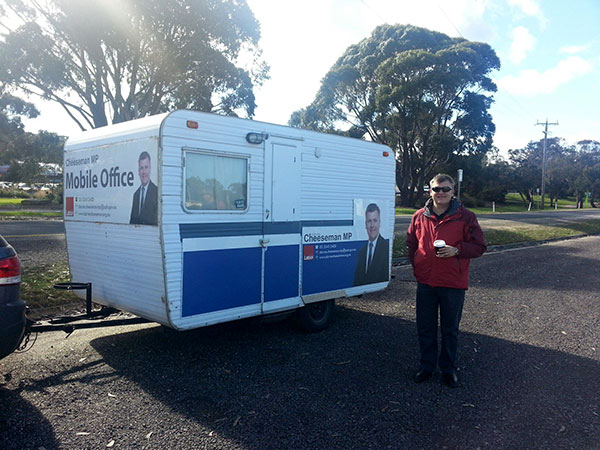 On tour with the family

What do you say to supporters of Julia Gillard who are unhappy with your actions leading up to the reinstatement of Rudd?

What I would say is that I formed a view in 2012 after hearing a large amount of feedback from my community and felt that we needed to restore Kevin Rudd as the Prime Minister. I made my position known publically. Everyone in the community knows my position on that. We had a vote in the caucus and as we all know, Julia prevailed. She was a fantastic Prime Minister but ultimately at the end of the day, because of the way she came to office probably meant that she was never going to be given a fair level playing field. We needed to recognize that and ultimately we did. We came to that conclusion in June of this year and restored Kevin Rudd as the PM. It’s probably what the people of Corangamite wanted, by and large. In terms of people that express a view with respect to Julia, I certainly quite proudly point out the things she did deliver for us. She certainly, very much, got us on the right road with respect to the education reform deal. She certainly played a very substantial role in delivering DisabilityCare and indeed the head office here. She made that announcement with me. It wasn’t a personal reflection on her. It was just a statement of fact; people wanted Kevin Rudd back as leader. I recognized that. I made it clear and I was quite consistent in my position. I played the team player. I did what I could to support Labor in delivering the things that are important to the people we represent and that’s what we did. 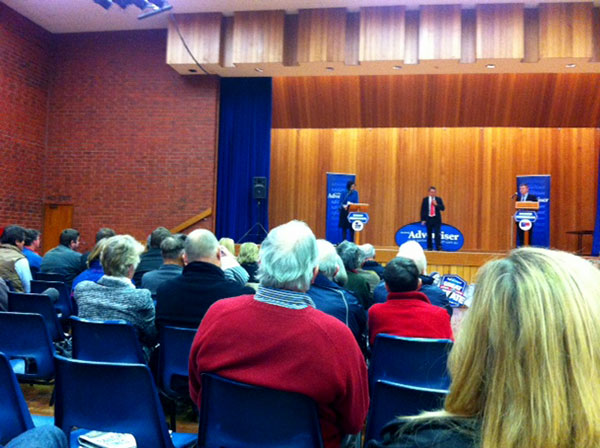 Is there a politician past or present who you admire?

I think what I admire most, at least for existing politicians and the ones I’ve served with, is those that conduct themselves in a polite way, and that doesn’t mean they can’t have a robust political debate, they certainly can and should, they are there to represent their people. But the personal attacks that have become a little bit of a feature, not only in Australia but across the globe in the last few years is pretty regretful because that leads at the end of the day to a lot of people being turned off politics and I want to see as many people engaged in politics as possible. They might not agree with whatever politician x or y is doing but having an engaged society, that is fully aware of the facts, and that can only come from civilized political debate and discourse, leads to us having a better society. Politicians and Parliaments that don’t act in a decent way collectively turns people off and we’ve seen a bit too much of that in the past few years.

So you don’t have a political hero? Like Gough or Bob?

Hawke, he was the Prime Minister when I was growing up and when I was forming an interest in politics so he was exceptionally good.

Someone on the Liberal side of things, in the current Parliament, whom I thought was an exceptionally decent human being and who conducted himself the way I just described before, is Mal Washer. He’s unfortunately retiring at this election. He’s a WA lib. He was a doctor before entering politics. He spoke out lots of times against the Howard government on asylum seeker policies; a really decent human being. He’s someone, albeit from the other side of politics and albeit probably  40 years older than me, is someone who I admire the way he went about doing what he was elected to do. He was a very civilized human being, very polite and very accommodating, always trying to work with all parliamentarians to try and find common ground and common policy fixes.

*Link to blog I referred to Darren is here, he hadn’t read it when I interviewed him