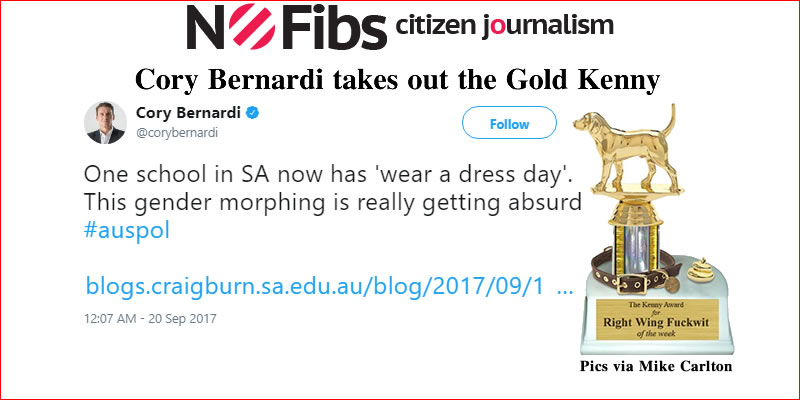 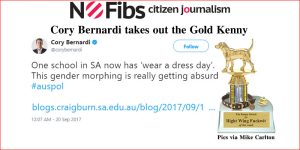 The weekly Gold Kenny has been awarded by Mike Carlton to Cory Bernardi for his outstanding fundraising abilities.

But there can only be one winner. For this truly spectacular own goal, it's Cory 'The Tory' Bernardi ! #goldkenny pic.twitter.com/DIRyk6rRRm

Cory Bernardi [seen here in this intriguing pic with an unidentified male friend] is our Right Wing Fuckwit of the Week ! #goldkenny pic.twitter.com/x9qJCvlQlv

Earlier this week, Senator Bernardi took to Twitter to condemn South Australian primary school Craigburn for a fundraiser. He accused the school of ‘gender morphing’ after it joined the Do It In A Dress campaign to generate money to support the education of girls around the world through students wearing a dress for a day.

From its website, the Do It In A Dress movement hopes to draw attention to the 60 million girls around the world who are denied an education. The students from Craigburn had come across this campaign and wanted to contribute.

On the back of Senator Bernardi’s Tweet, Josh Thomas pledged $2,000.

Initially, Senator Bernardi seemed a little annoyed at the boost his tweet had given the campaign.

However, by Friday afternoon he was chilling with a beer and celebrating.

Other contenders for the Gold Kenny this week

Rowan Dean, 'The Talking Muffin', fired off this fabulously demented rant on The Prince of Orange at the UN. #goldkenny https://t.co/o7My48CKoK

Our judges were awe-struck by Malcolm 'Ten Pound Pom' Roberts in his stunning show before the High Court #goldkenny pic.twitter.com/oxZaBuKwPG

Congratulations to the Dutch Dickhead ! A wonderful winner of the coveted #goldkenny for RWFW of the Week ! pic.twitter.com/uP1B4mtS3W