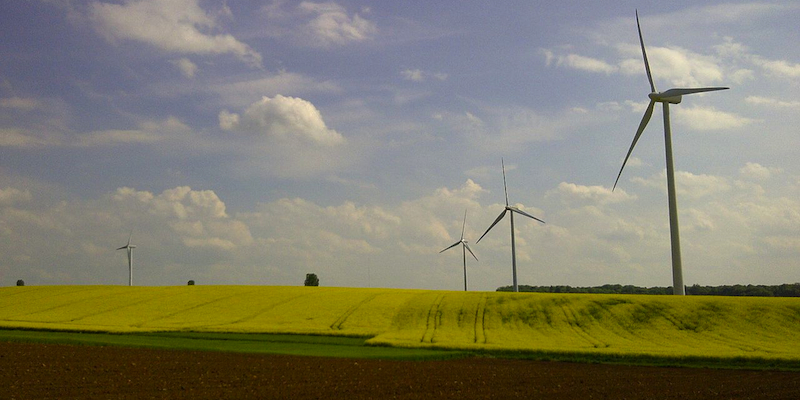 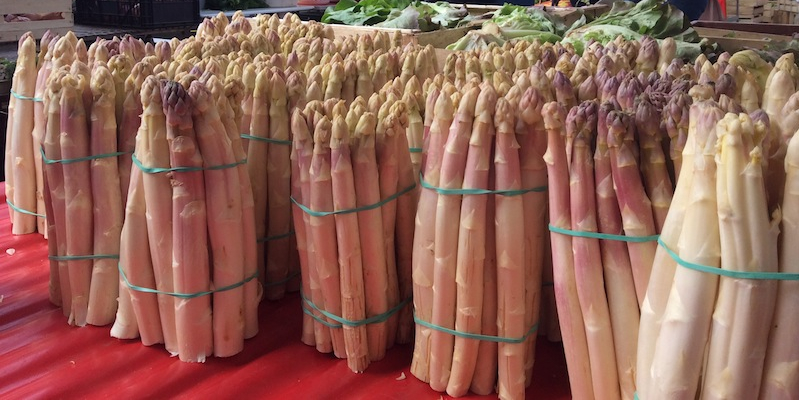 It’s safe to assume our Treasurer Joe Hockey would not have enjoyed a trip to France with Prime Minister Tony Abbott earlier this month.

There’s just too many wind turbines across the French landscape. Hockey would have been offended every few kilometres.

I should know, I spent hours admiring the French commitment to clean wind-generated energy as endless, slender, spinning white needles slid past on my high-speed rail journey into the heartland of the country’s southwest.

There is no doubt in the Lot they know that they’ve got, culturally and environmentally, and they are busy protecting it.

In the region known as the Lot (with its capital Cahors), massive forests reach wide green arms into built-up areas and quickly swallow visitors into an ancient rural landscape which still sustains its farming industries. 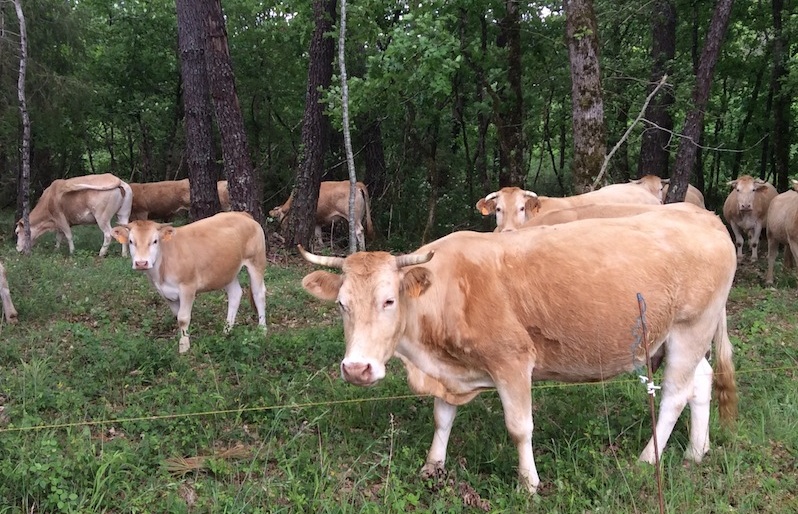 Cows roaming through forests near Prayssac.

These abundant forests are not national parks, but a regularly harvested source of timber and firewood, large and well managed enough that supply is not threatened and wildlife has a permanent refuge alongside livestock.

Supporting the regional agricultural economy, serious fresh food markets take place in most towns a few days every week, a vibrant and profitable exchange of local produce and other goods for the benefit of residents. Compare that to token farmers’ markets once a month, begrudgingly permitted by local chambers of commerce in Australia.

Every day, street sweepers (teams of people with brooms employed by the local council) clean the towns. Not just a cursory brush here and there, but every cigarette butt and scrap of paper.

Far from major cities, reliable service connects people to the internet without the same dropout I regularly encounter at home, a mere 35 kilometres from the central business district of Brisbane.

But the greatest surprise, for me, came with the palpable sensation of creativity happening all around me.

Millennia-old heritage architecture abounds. Wherever recent building work has been undertaken, it complements townscapes instead of fighting against them. Modern repairs are completed with ancient building techniques. New properties are built in the same manner as homes that are hundreds of years old. Satellite dishes and solar panels are positioned to blend in. From their homes, to their public spaces and their everyday items, the locals are not afraid of heritage or design.

Local theatres, cinemas, galleries and ateliers (artist ‘workshops’) are in high saturation. Their output is not tourist fodder, but art for art’s sake.

In a region whose food export relies heavily on dubious animal welfare principles (foie gras, anyone?), and where hunting is commonplace, I spotted the word ‘vegetarian’ more often in advertising than I have ever encountered it in Queensland, where I’ve had a worse time as a veggo than a homosexual.

Travelling with my husband, we didn’t sense a hint of homophobia. Same-sex marriage has been legal in France for a year.

About now, you might be thinking: “If it’s so great, why don’t you move there?”, along the lines of the ‘Australia: love it or leave it’ principle.

Well, we did go into a real estate agent in the Medieval town of Gourdon, only to find that our dream home (a flat above a 15th century shop) was on the market for 55,000 euro (just under AU$80,000). Tempting enough to admit that I really don’t love Australia to the point that I would never leave it.

As we left the region, I got the sense that I was returning to a world that is busy destroying itself. There is no doubt in the Lot they know that they’ve got, culturally and environmentally, and they are busy protecting it.

I felt bereft as this special place disappeared in the wake of the high-speed rail journey back to Paris, where the sight of cars plugged into electrical recharging points, which have become part of the very infrastructure of the streets, was a sign that even French cities are connected to an alternative present, not just dreams of a different future.

No one demographic dominates the Paris population. Mass immigration has resulted in the kind of melting pot of cultures which goes well beyond tolerance of unfamiliar cuisine. Both days we were in the city, loud, peaceful political protests for Sri Lankan and other refugees occurred. Australia’s base fears about racial and cultural differences, and our government’s cry that we are being overrun by asylum seekers, simply fade into the multicultural Parisienne haze. 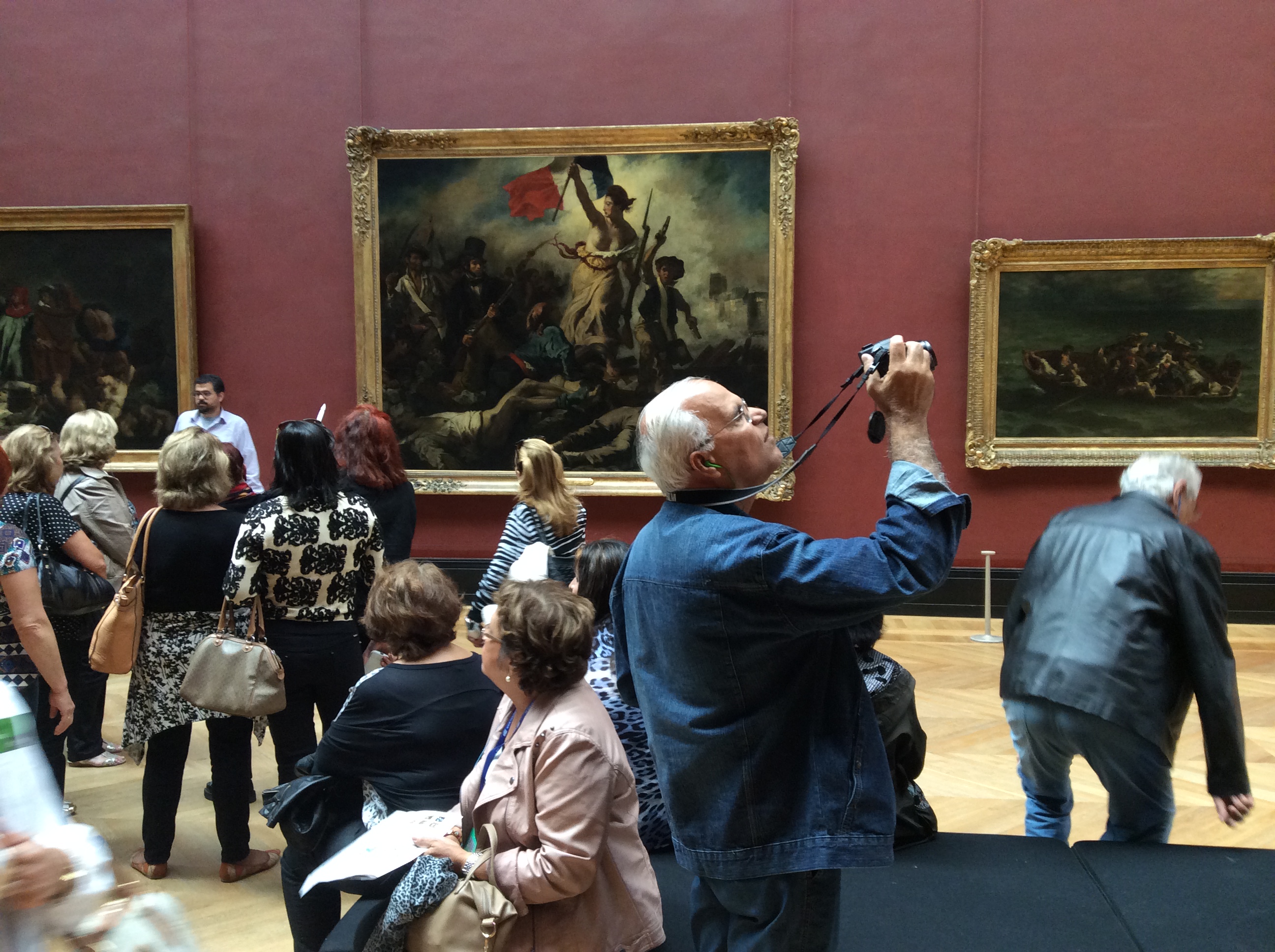 Western masterpieces are just the tip of the iceberg at the Louvre Museum.

At The Louvre, all the great Western masterpieces are on show, but included in this ‘greatness’ were acres of decorative arts from the Muslim world in the museum’s permanent collection.

Yes, I could be accused of seeing the grass as greener through my rose coloured glasses, but before leaving the Lot I asked a couple of local British expats about the region.

Wages are low. The economy is seasonal and almost shuts down over the deep winter. To counter this, most residents live well within their means. Perhaps that is what people did before economies relied so heavily on debt, deficit and the need for everyone to spend, spend, spend?

I don’t know why France and Australia are the way they are. Penal colonies, bloody revolutions and wars feature in the histories of both countries. Both have elected conservative governments for most of the years since the turn of the millennium. Something is at work in France which is beyond political ideology.

I left with far more questions than answers: What lies about the environment, immigration, culture, heritage and development have we believed, that such vast differences have become the reality in two Western economies?

What makes it possible for Australia’s Treasurer to be so vehemently offended by something which is already deeply embedded in France’s way of life? Are France’s wind turbines more or less offensive to Joe Hockey than Australia’s tradition of exporting uranium to France for their nuclear electricity generation program, which is Europe’s largest?

The French have a term for it – vive la différence (‘long live the difference’) – and perhaps they have learnt to say it about themselves more than others?

A much younger nation with an ancient first population, Australia doesn’t yet have words to express the same sentiment, and that is a telling difference indeed.