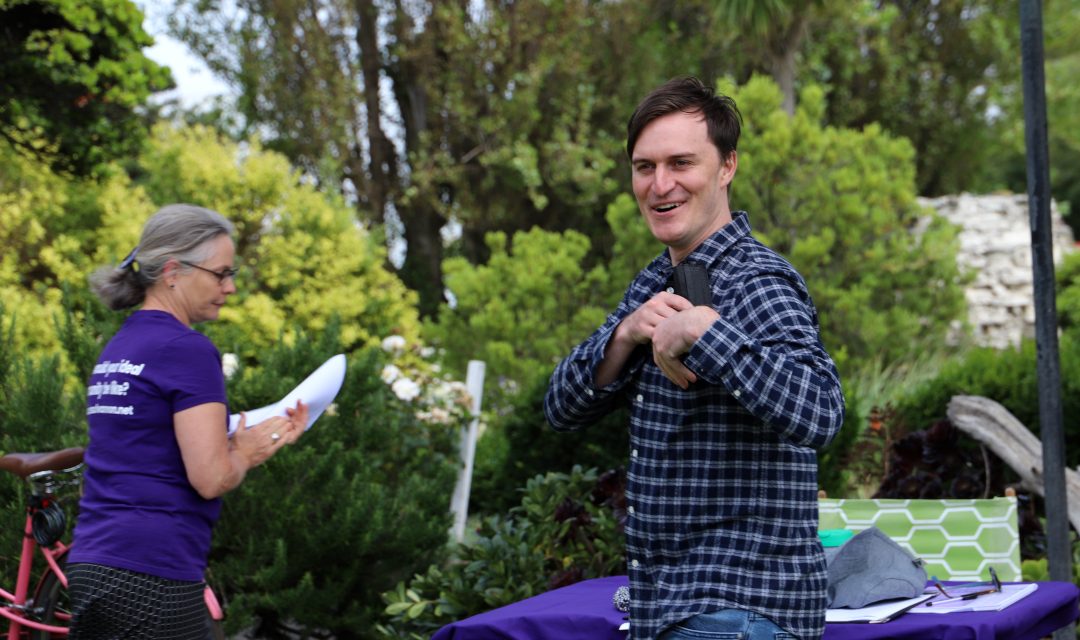 LAST WEEK VOICES of Wannon announced their independent candidate as podcaster, comedian and former Triple J Breakfast host, Alex Dyson (aka Rat Dog). Shortly afterwards the Victorian government strengthened Covid restrictions making their campaign the first of probably many to be thrown a major curve ball by the pandemic.

The campaign launch was originally scheduled for Saturday with a meet the candidate event Sunday. The launch is now pushed back to early February, the Sunday event went ahead at Fletcher Jones Gardens in Warrnambool.

I’ve been fascinated by Wannon since learning there was a ‘Voices’ group organising in the South West Victorian electorate. It’s a Federation seat once held by former Prime Minister, Malcolm Fraser from 1955 to 1983 and is currently held by Liberal Dan Tehan.

Observing from the outside in through social media and snippets of information from people closer to the group, Wannon seemed to be quietly and methodically putting their ducks in a row.

Main stream media has a simple narrative around the Voices movement: climate, integrity and women.

These are unifying national issues, but look closer and it’s apparent the different groups have different needs, issues and are following slightly different processes in their participatory democracy journey.

Each ‘Voices’ group has taken the Voices for Indi model of political engagement through respectful conversations in a safe and welcoming environment and used it to create their own community vision for representation.

Like Sophie Mirabella in 2012, Tehan rejected the advances of the Wannon group and their report. It was at that point the decision to run a candidate was made and the selection process began.

After driving through the rising sun and lower reaches of the electorate, a landscape of green and gold dairy, beef and cropping farmland, I arrived at the coastal city of Warrnambool about an hour before the event was due to begin.

Dyson arrived in Warrnambool in 1988 still inside his “mother’s tummy” after his father accepted a job at Fletcher Jones and Staff Pty Ltd.

Fletcher Jones was an innovator in workforce participation, his staff eventually owning more than 50 percent of shares in the company – “Fletcher Jones employees had a voice in how the business operated“.

I got a sense of community pride in the history of the company, especially from Dyson himself.

A call to young voters

Wannon has chosen the first male ‘Voices’ lower house candidate for the upcoming election. He ran as an independent in 2019 with the aim of engaging young people in the democratic process.

You’re running again, you ran in 2019. Your video, everyone remembers your video. What put that idea in your head?

Well, it kind of played to my strengths a little bit. That campaign was all about shining a light on the importance of politics. Trying to engage young people who may be understandably bored and disillusioned by the way politicians talk to people. It’s very monotonous. It’s deliberately vague. And I really wanted to do something political which would also be engaging to communicate the message. My friends had told me over the years that I was quite a unique dancer. I thought by communicating what are super important messages in a different way, could be a way for people who would otherwise turn on a political ad and immediately mute or change the channel, would be able to see it and interact with it.

I wonder what Malcolm Fraser would’ve made of a community backed candidate in their early 30’s running in his former seat.

At the 2019 election Dyson’s independent campaign won 10.3 percent of the primary vote without the support of a community ‘Voices’ group. Tehan was returned and won a +0.69 percent primary swing.

On the surface you’d have to say Dyson achieved his aim at the last election, the engagement of young voters in politics. However to win the seat he must also take votes off the Liberal who won 51.11 percent of primary votes.

Voices of Wannon has around 100 members, smaller than most groups but I assume that will grow as the election draws nearer.

One common feature most ‘Voices’ groups share is they attract people from across the political spectrum and people from right across electorates (critical in geographically large rural electorates).

Dyson will have a community organisation of volunteers spread throughout Wannon with social connections across the electorate to start conversations that might otherwise be difficult to start.

Throughout most of rural eastern Australia there’s a slowly evolving crisis in affordable housing as people leave the cities and move to rural areas – this can be seen in the tiniest of far flung places.

Recent electorate boundary changes to Wannon include additional communities along the Great Ocean Road. Many people are feeling high levels of rental stress or being priced out of the property market.

Wannon’s report lists affordable and social housing as major community issues and some areas are in extremely high demand with people fleeing Melbourne and the pandemic. Speaking to this probably offers Dyson an opportunity to win the votes of those impacted and newcomers perhaps more likely to vote independent.

Voices of Wannon are hoping this is the case.

Dyson is definitely a longshot to win the seat and there’s a hell of a lot of work to be done. However, the campaign has a head start with an experienced candidate that at the last election won 10 percent of the primary vote.

The mission for Dyson in 2022: convince more Labor and Greens voters to give him their primary vote and have a crack at winning the primary vote of disenchanted moderate Liberals who probably didn’t listen last time because he wasn’t talking to them.

NoFibs will be covering the launch in early February and it’s a seat we’ll be watching with great interest.