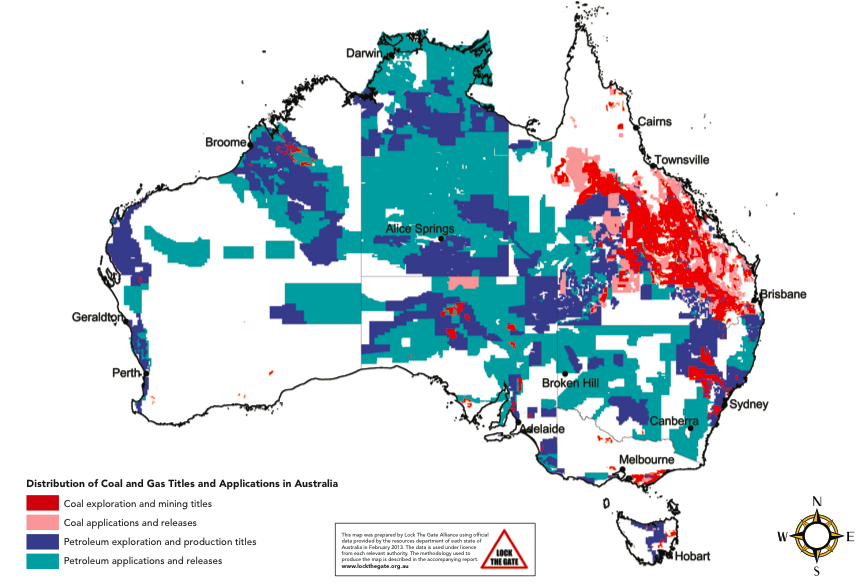 The NSW Government is considering an application by giant gas company AGL to begin the controversial and risky process of hydraulic fracturing, or fracking, at Forbesdale, just south of Gloucester in the Manning Valley NSW – less than 300 metres from the nearest family home and less than 600 metres from 35 homes in a zoned residential area.

Premier O’Farrell is expected to announce his decision this month on AGL’s application to the NSW Office of Coal Seam Gas for their Review of Environmental Factors (REF)  for a fracking stimulation management plan – and local residents are digging in to fight the good fight.

The Gloucester community has banded together to fight AGL.

Fracking is shaping up as a classic western showdown in Gloucester.

The Good, The Bad and the Ugly

One of the main issues that Gloucester residents have with AGL’s plans is they will frack in the close proximity to family homes in Gloucester and Camden, well within the 2km exclusion zone as stipulated by the NSW Government in February 2013.

NSW Greens MP Jeremy Buckingham said: “This proposal breaches Barry O’Farrell’s promise to stop fracking and drilling within 2km of residential areas and the government should reject this plan and tell AGL to keep more than 2 kilometres away from people’s homes.”

“Emissions from these four wells are estimated by AGL to be 65,000 tonnes of CO2e. That’s the equivalent of 13,000 cars driving around for a year. Venting and flaring will also release volatile organic compounds, which are a concern for human health,” he said.

Former Gloucester Mayor, Julie Lyford, has called on the NSW Office of Coal Seam Gas to withhold consideration of AGL’s application until the comprehensive water study has been completed and presented to the community.

In 2011 landholders and residents maintained a blockade stopping AGL from putting a coal seam gas drill rig into place and asking for an independent study of groundwater hydrology to be undertaken, which still has not been done, despite claims by AGL that they are listening to the community.

Australian water expert Dr Philip Pells has been a vocal critic of the coal seam gas project at Gloucester. He said the risk of fracking to the river system and local community is too high.

He said that the Gloucester Basin has a largely unknown geology, with underground aquifers ‘intimately connected’ with the surface water.

Dr Pells claimed that AGL lacks an adequate plan for disposing of the salt waste water in the papers he has written on the subject.

He disputed AGL’s claim that there is ‘more salt in rainwater’ than in the frack waste water (also called ‘produced water’) brought up from the gas wells. In order for that to be true, he said, there would be just one bore every 10 square kilometres with each bore yielding less than 0.16 litres per second of produced water. Normal production of a gas well is 2-5 litres per second.

Gloucester landholders, farmers and residents are concerned about the disposal of the salt produced water.

Venting and flaring methane gas wells within a few hundred metres of residential homes was probably the last thing that people thought would happen when they bought into the rural Forbesdale Estate in 2010. To add insult to injury, the Rocky Hill open cut coal mine is also awaiting a decision by the NSW Government and is located just 1.5 kms away from their homes.

All but two blocks in the Forbesdale Estate have homes on them. There are at least 35 homes which are within 2kms of both the CSG wells and the proposed Rocky Hill mine. The whole estate is well within 2kms of these coal seam gas wells.

With families and farmers living and working within 300m of gas wells, the chances of accidental explosion from hot water systems or any flame should not be worth the risk for any responsible company.

Gloucester is concerned that thousands of jobs in the established tourism, cattle and other sustainable rural industries are at risk.

The Gloucester Project, officially known as PEL 285, covers 1308 square kilometres, the entire 600sqkm of the Gloucester basin, below Barrington Tops.

These same wells have already accidentally blown off methane resulting in a shut down in 2004. Several boreholes up to 300 meters away unexpectedly blew off methane gas while fracking.

However, AGL insists that ‘claims that wells will be close to houses is incorrect.  The closest any well will be to a residence is around 300 metres’.

Three hundred metres is less than the length of 25 school buses or 15 mining trucks and a man ran that distance in less than 31 seconds in 2000. It is less than three minutes walk for mere mortals. It is 1/5 of a city mile and much less in the country, literally in the backyard for these residents.

AGL has approval for the 110-well stage one of the Gloucester Gas Project that proposes about 300 wells. AGL says the details of stage two and three of the project ‘are yet to be decided’.

Construction has begun on the gas pipeline to Newcastle, about 100 kilometres south of Gloucester, and a $300 million gas storage centre. AGL only has an exploration license, pending approval for a production licence.

AGL has touted that the Gloucester fracking project will create jobs, however their website confirms that the number of employees will only be 11.

The NSW State Government representative for Upper Hunter, Nationals member George Souris, said in an email: “There was a development approval granted by the previous Labor government to AGL just prior to the commencement of “caretaker” mode prior to the March 2011 State Election. This full approval cannot be rescinded retrospectively.”

Many commentators, including Alan Jones on radio 2GB, have suggested that the NSW Government can still enforce the 2km exclusion zone from the affected Gloucester residences, if it chose to. Greens spokesman Max Phillips said the NSW Government may have had legal advice that it may be liable to compensation to AGL if the 2kms exclusion zone was applied to the Forbesdale homes.

In the 2013 AGL annual report, chairman Jeremy Maycock addressed the NSW Government’s 2km exclusion zone for villages: “unfortunately the proposed changes are a disappointing example of energy policy development. They have been developed on a reactive basis and without consultation.”

Earlier this year, in April, cited in a report to shareholders: “Potential losers: Apart from AGK, which has flagged writedowns in its NSW CSG assets, we remain concerned about possible delays in AGK’s Gloucester CSG project.” AGK is the Australian Stock Exchange code for AGL.

An overwhelming majority of Australian water industry professionals think that coal seam gas is a risk to groundwater according to a survey by Deloitte and The Australian Water Association.

According to AGL’s website: How will AGL protect Gloucester’s water? Each well is physically separated from beneficial aquifers by at least four layers of high integrity steel casing pipe and cement.”

The NSW Irrigators Council said Mr Macfarlane should carefully consider the concerns of irrigation farmers before dismissing them as ‘noisy protesters, minority groups, with no interest in the economic progress of agriculture and mining together’.

Mr McFarlane said in September that he to make sure that ‘every molecule of gas that can come out of the ground does so’. Mining and exploration permits will be rescinded if developments are delayed, he told the gas industry.

McFarlane said prior to the election: “I was the one that drove the issue in NSW where the resources companies were told that they couldn’t drill within 2 kilometres of houses. Now I do those things not because I want publicity but because it’s the right thing to do. And in the end that’s what I do. I try and represent the people as best I can and I try to do the right thing. So if you need a voice at a federal level on this issue then I’m always there.”

The new federal representative for Lynne, National Party MP Dr David Gillespie, a gastroenterologist based more than 150kms away in Port Macquarie, has refused to comment on the coal seam gas issue in his electorate.

Gloucester residents and their supporters today began a protest in front of the AGL offices, calling on them to halt the fracking so close to family homes until the NSW chief scientist’s report and the independent water studies are finalised.

Residents are calling on NSW Premier O’Farrell to hold approval until all the facts are known.