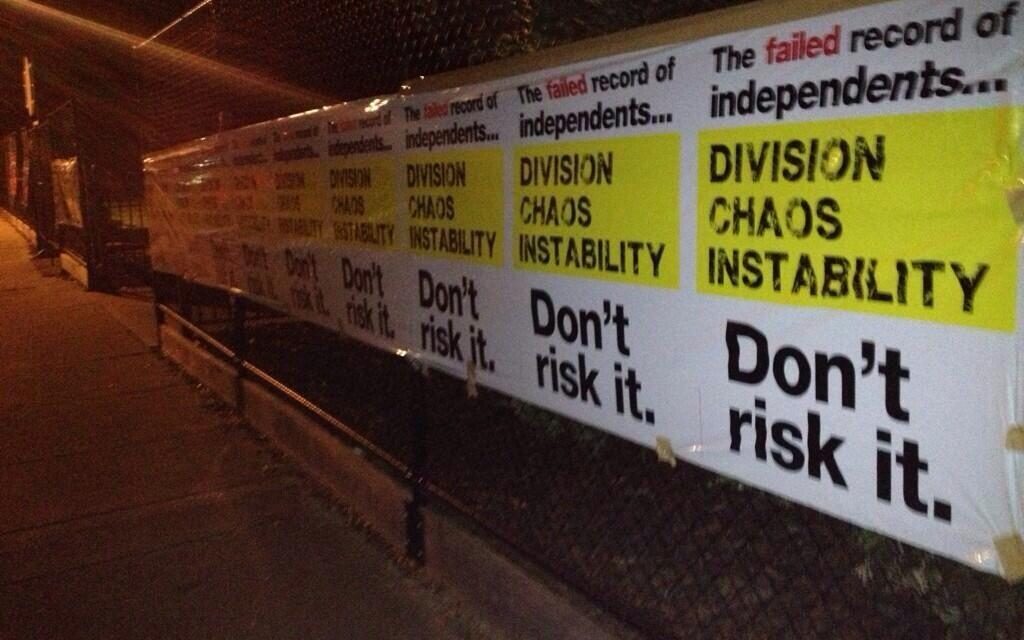 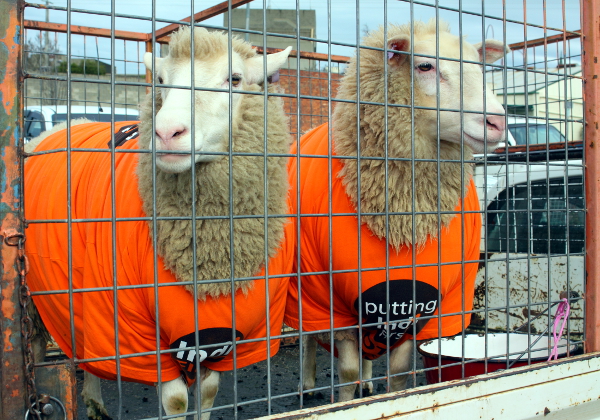 Local businesswoman Jenny Anderson of Rutherglen Lamb has been driving around Indi with a couple of friends, lending support to Cathy McGowan’s campaign.

In what can only be seen as a desperate act, Sophie Mirabella’s early Friday night took almost all available space at polling booths for Liberal posters.

The Mirabella team then posted security guards at booths in Wangaratta, Wodonga and Benalla. Citizens took to Twitter to voice their concerns and started going to their local booths to check their patch democracy had not been overwhelmed by Mirabella’s heavy-handed tactics.

As often the way on Twitter, others used humour to voice their disgust with Mirabella.

“We are absolutely disgusted at the Liberal Party tactics at smothering polling booths with negative propaganda from as early as 7pm the night before the election. On inspection of a number of booths in Wangaratta this evening, we have found little to no space being afforded to anyone else but the Mirabella Camp. This is a desperate ploy by a desperate local member who is struggling to get a finger on the pulse in INDI. I am sure the electorate will see through this blatant negative and hostile campaign lead by Sophie Mirabella and elect a true representative to INDI.”

“She’s very threatened. She can have all the security guards she likes but people are going to vote according to what matters to them. It appears changing our representative in Indi is what matters.”

I asked Jenny if she viewed such tactics as intimidation:

“Of course, its part of Sophie’s modus operandi, heavy handed tactics to try and intimidate people. But it won’t work….you can put on security guards, try and bribe people, posters everywhere, spend a fortune on advertising, but it seems people of Indi are not convinced by that. They want a representative who is decent. I’m also concerned about my single poster!”

“Tonight, the night before election day they have coated every major polling booth with huge coreflutes and plastic wrap warning people against voting independent. It is a step too far and the people of Indi will see through it. What we have seen from Mirabella’s campaign is how out of touch from the electorate she is. People are tired of the same old negative slogans and bitter politics that have plagued the last parliament (much of which is due to our member). We’ve come too far and done too much to allow dirty tactics like this to stand in our way. The wonderful thing about democracy is that everyone gets to have a say and let’s hope the people of Indi make the right choice tomorrow. There is certainly a wind of change blowing through the electorate and a lot of people are saying the time is right to finally get a representative who cares about the people.”

For the past 2 to 3 weeks, Indi has been bombarded by a campaign aimed squarely at trying to convince voters not to vote for independents. Most of the advertisements, flyers and letters told voters only the Liberals could deliver stable government and independents equalled instability. Mirabella has been telling voters only a member with a seat at the cabinet table can deliver for the people of Indi. That message was completely undermined by the coalition’s announcement on Thursday of planned cuts worth $2.48 billion from the Regional Infrastructure Fund.

Locals made up of McGowan supporters and others took to the streets of Wangaratta on Friday voicing their disapproval of the cuts in store if the coalition is elected.

Eighty locals showed up at the drop of a hat to protest the LNP's massive cuts to regional infrastructure #indivotes pic.twitter.com/tF1lofY4ob

The coalition also announced a “rephasing” of the Murray-Darling Water Buyback Scheme. Four years worth of buybacks would now be spread over six years.

The prize for the most aesthetically placed sign goes to Bob Murphy of the Palmer United Party. 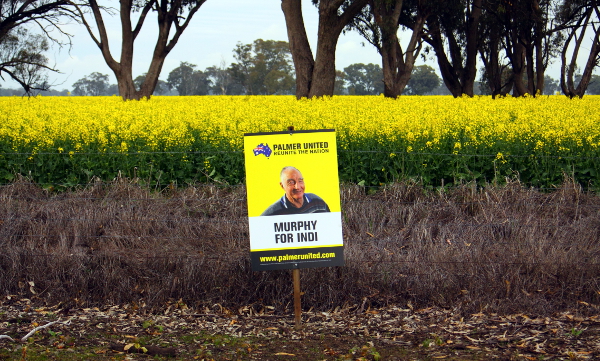 Margo Kingston will be in Indi today. Margo (@margokingston1), Tom Anderson (@TomAnderson62) and myself (@jansant) will be tweeting from around Indi during the day and into the evening.

Good luck and thank you to all the candidates around Australia, its the people willing to step up and have a go that helps keep our democracy strong.