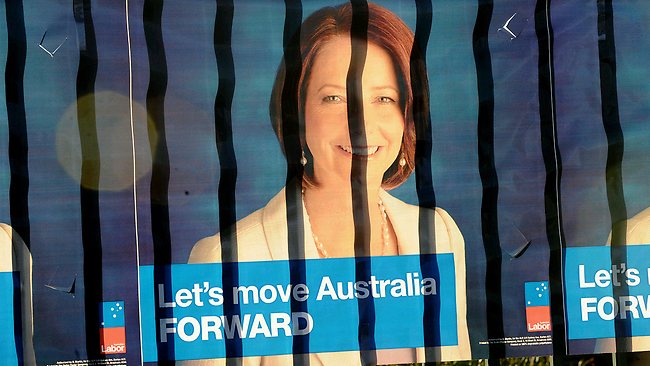 On 6 November, 2012, an article with accompanying photo appeared on Michael Smith’s blog site. The post included a weblink to The Australian, and the article Gillard call would have ‘ led to fund inquiry’, by Hedley Thomas. Sandwiched between the headline and the article on Smith’s blog site was a photograph of the Prime Minister depicting her behind bars.

I immediately lodged a complaint with the Press Council: ‘…an article/accompanying photo in today’s copy of The Australian, and available through Google, has prompted me to [make] a complaint. I include the weblink and a copy of the page. I believe the photograph impugns the integrity of the PM, depicting her behind bars, and as a private citizen I am appalled at this journalism.’

The Press Council advised that no such photograph had appeared in the digital or hard copy editions of  The Australian and that it was a ‘doctored’ photo posted by a blogger. Obviously, my complaint was prompted by a ‘fiction’ and as such, I did not proceed. The Press Council dealt with the matter in a very timely fashion, contacted me by phone and email, and thanked me for bringing it to attention.

I was and remain shocked by such a blatant and disrespectful representation of the Prime Minister.

But what really happened…
by Margo Kingston

When Anne emailed me her complaint to the Press Council, I suggested she write a piece about her experience and noted that I would seek comment from Mike Smith before publication. I expected a ‘Yes, I photoshopped the pic., big deal, I reckon she’s guilty’.

You never know the truth till you call.

Mike’s response was surprising and disturbing, and we agreed that he would write a considered statement, published in full below.

You make up your own mind about what went on in Murdoch’s stable. I will email this post to the Press Council upon publication and request it to re-open the investigation in the light of new evidence.

We have published Anne’s correspondence with the Press Council under Mike’s statement.

I recall seeing that photo for the first time very early in the morning of 6 November, 2013 – Melbourne Cup Day.

Hedley Thomas had filed this report.

On reading Hedley’s story I cut and pasted some of his text and republished it on my blog for the purpose of eliciting commentary about the issues he disclosed.

I don’t know if I took the text directly from The Australian’s website or from a re-posting of Hedley’s story elsewhere on News Ltd sites like perhaps www.news.com.au or one of the tabloid sites, dailytelegraph.com.au or heraldsun.com.au.

I wrote at the time the heading ‘The Australian newspaper’s picture editors get it!’, and by that headline I intended to convey the notion that whoever chose that photograph understood the thrust of the reporting on Ms Gillard’s course of conduct in The AWU Scandal.  By that I mean the things described in the documents, the transcription of the taped Record of Interview between Julia Gillard, Peter Gordon and Geoff Shaw on her departure from Slater and Gordon and other evidence I have printed on my blog.  In particular, Hedley’s piece on 6 November, 2012 reported that if Ms Gillard had simply disclosed to her real client the AWU the existence and misuse of the AWU-WRA at the same time as she spoke about it to her partners on 11 September, 1995 – then the union would have had the chance to sieze the assets of the association and recoup some money from the embezzlement.

I have searched for the photograph’s history and I see it was published by the Herald Sun on 17 July, 2011 here.

From the look of that posting of the photo, it’s of a flexible poster or banner printed on some textile or tarpaulin type material probably strung on a fence.

Below is an extract from the Michael Smith News Blog commenting on a story from Thomas Hedley in The Australian November 06, 2012. Note that despite what the Press Council said, the image was published by News Limited in the Herald Sun July 17,  2011. 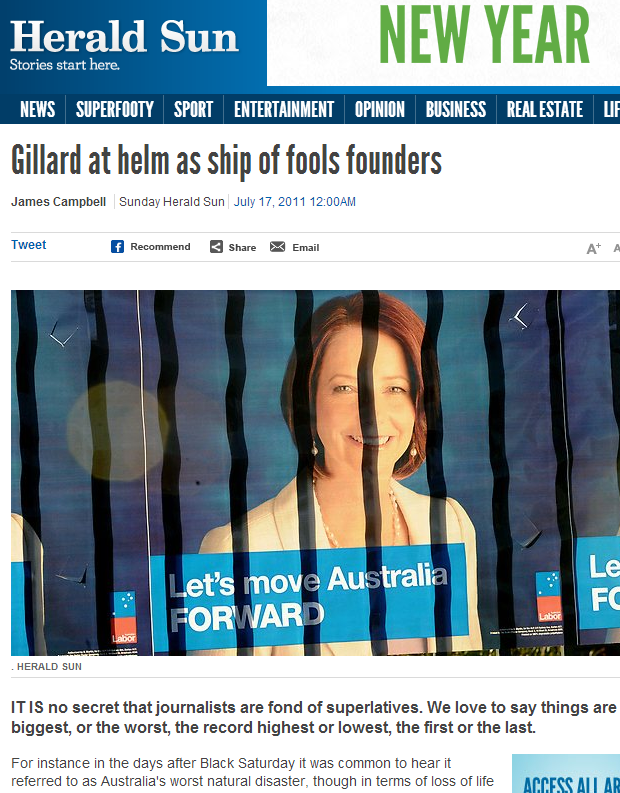 The Australian newspaper picture editors get it!

ONE telephone call from Julia Gillard or law firm Slater & Gordon would have led to confirmation that a union slush fund she had helped set up was a mystery to its own branch and almost certainly fraudulent, says a former Australian Workers Union boss…

I am contacting you as a follow up to our previous conversation by telephone and email. I made a complaint about The Australian on 21 August about a campaign by the newspaper against the PM. Although I did not pursue the complaint at that time, an article/accompanying photo in today’s copy of the Australian, and available through Google, has prompted me to once again take up the complaint. I include the weblink and a copy of the page. I believe the photograph impugns the integrity of the PM, depicting her behind bars, and as a private citizen I am appalled at this journalism.

Do you wish me to also file my complaint in the appropriate box on Press Council website?

I have checked the website I mentioned michaelsmithnews.com and the picture plus article is on p.7. with the heading ‘The Australian newspaper picture editors get it!’ You are correct…looks like the photo has been ‘doctored’.

I certainly do not wish to blame a newspaper wrongly…had not even considered that someone would tamper with a photo like that.

I leave it in your capable hands.

Thank you for your complaint received on 9 November 2012.

As it appears the complaint concerns a ‘blogger’ and not The Australian, the Council will not be pursuing the complaint.

While we cannot assist you in this matter, the Council thanks you for bringing it to our attention.