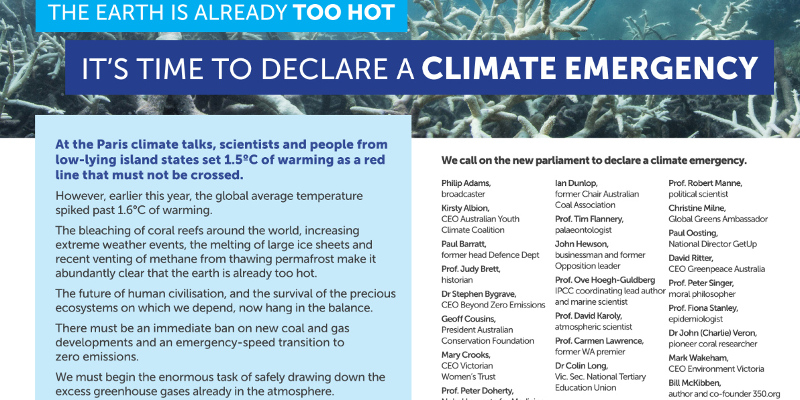 On thursday 23rd June a host of eminent Australians called on the next Australian Government to declare a climate emergency. The call was made in an open letter published as a half page advertisement in The Age Newspaper.

There was no other coverage. No comment by political leaders. Just a political silence. In the middle of an election campaign.

The issue being raised is a fundamental one which affects us all and future generations, yet political silence reigned.

The letter comes near the end of the second last week in the Federal election campaign.

Climate change has reared it’s head, but only due to the massive coral bleaching on the Great Barrier Reef and the coastal erosion and flooding from the East Coast Low.

Band-aid solutions were hauled out and Slush funds established. There was little actual policy debate. And both major parties want to keep it that way it seems.

The Liberals have started ramping up the rhetoric on asylum seekers and stopping the boats, while Labor has seized upon the future of Medicare under a Liberal Government, accusing them of a privatisation agenda. Both major parties are pushing the fear buttons of voters.

Anything to ignore the giant elephant in the room that the two major parties are trying to studiously ignore: climate change.

So what did these eminent people say? The open letter states in full:

“At the Paris climate talks, scientists and people from low-lying island states set 1.5ºC of warming as a red line that must not be crossed.

However, earlier this year, the global average temperature spiked past 1.6ºC of warming.

The bleaching of coral reefs around the world, increasing extreme weather events, the melting of large ice sheets and recent venting of methane from thawing permafrost make it abundantly clear that the earth is already too hot.

The future of human civilisation, and the survival of the precious ecosystems on which we depend, now hang in the balance.

There must be an immediate ban on new coal and gas developments and an emergency-speed transition to zero emissions.

We must begin the enormous task of safely drawing down the excess greenhouse gases already in the atmosphere.

We call on the new parliament to declare a climate emergency.”

This ad is associated with a climate emergency petition that Australian grassroots climate change groups have organised and promoted since early March 2016. Over 20 groups are currently supporting this campaign in Australia.

The prominent Australians featured in the ad were a cross-section of Australia in the fields of business, medicine, climate science, trade union, former political leaders from across the mainstream political spectrum (Liberal, Labor and Greens), academia and various civil society organisations.

Ian Dunlop, a former Chair of the Australian Coal Association and former CEO of the Australian Institute of Company Directors said: “We are out of time for gradualist policy. We need courage rather than procrastination from our aspiring leaders. Emergency action is a call increasingly being taken up by leading scientists and responsible leaders around the world as extreme events escalate.”

Epidemiologist Professor Fiona Stanley said she is already measuring the health impacts of global warming:
“Our children top the list of those most likely to suffer from climate change. Their future, their health must be our number one priority. We are doing too little, too late. As a society we need to step up.”

Paul Barratt, a former Secretary of the Departments of Defence and Primary Industries & Energy, and a former CEO of the Business Council of Australia, said: “Climate policy is not providing a secure future for Australians. The implications of rising sea levels and drowning and failed states are underestimated. Just as we have faced fire, flood, drought and military threat in the past we now need to throw everything we can at the climate crisis. We must make action on global warming the nation’s highest-level priority.”

And there are many more from this list who are just as eloquent. Former political leaders include John Hewson, businessman and former Opposition leader and Leader of the Liberal Party, Professor Carmen Lawrence, former Western Australian Labor premier, and Christine Milne, former leader of the Australian Greens.

Acting on climate is not a left or right issue, but an issue that is already impacting us now that needs political leadership, not the present political miasma.

It is clear by this statement by eminent persons that there is widespread concern about the lack of political debate, leadership and commitment to taking the requisite actions required under the Paris Agreement which Greg Hunt signed for Australia.

Marc Hudson, a PhD Candidate at the Sustainable Consumption Institute, University of Manchester, at The Conversation (The sound of silence: why has the environment vanished from election politics?), looks at the historical importance of environment issues in Australian elections since the 1970s.

“No doubt both parties will fall over themselves to spruik their support for renewable energy, which is akin to motherhood and apple pie. What is striking about the history of climate change and federal politics is just how quiet politicians become once they get into campaign mode and face scrutiny for the specifics of their policy proposals.” said Hudson.

On the ground I see widespread grassroots concern in the number of political meet the candidate forums on energy transition, renewables and climate change. Just this week residents in Armidale discussed future energy solutions, with their local MP and Deputy Prime Minister Barnaby Joyce a no show. Similarly, a meet the candidates renewables forum in Wentworth failed to illicit the presence of their representative, Prime Minister Malcolm Turnbull.

Here in my own electorate of Wills where 10 candidates are standing, the Liberal candidate did not turn up for Climate Action Moreland election forum, or the other two Meet the candidates forums organised in Fawkner and in Brunswick. A sad reflection on the Liberal Party commitment to meet voters in a possible tight contest between Labor and the Greens where Liberal preferences to Labor will be crucial for the result.

It is clear that the Liberal Party has a Missing Climate Policy which they don’t want to explain even though voters in marginal eastern Melbourne suburbs electorates packed out the Box Hill Town Hall.

Although the Labor Party have a climate policy, there are huge silences on coal export, fossil fuel subsidies and pre-2020 climate ambition.

The feedback I have heard (email reports via my climate network connections) identifies that nearly all climate or renewables election forums, with the exception of the Coral, coal and climate forum at Box Hill, have been met with non-attendance by Liberal and National Party candidates. They obviously hold local face to face democracy in contempt.

David Holmes, a Senior Lecturer in Communications and Media Studies at Monash University argues in an article at The Conversation (The fossil-fuelled political economy of Australian elections) that the political duopoly is effectively doing the bidding of the mining and energy companies by largely keeping climate change off the election agenda.

Holmes highlights that with both major parties there is no dicussion on phasing out coal starting with a no new mines policy. Neither party will touch mining subsidies for Fossil Fuel tax rebates. Political donations reform is the big one, with substantial political funding from mining and energy keeping both major parties enthralled to a public silence on addressing climate change except in the most superficial ways.

“The losers are the voters, who are not only forced to subsidise the political conditions that make their per-capita emissions four times higher than the global average, but also subsidise the conditions in which climate is taken off the public agenda.” said David Holmes, He argues the biggest losers are our grandchildren, who are going to inherit the climate mess. 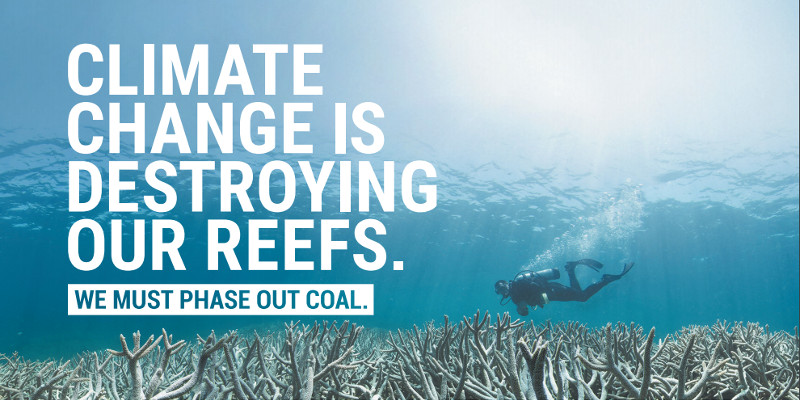 Australians have continually shown they want far greater action by Government on climate change. Survey after survey, opinion poll after opinion poll for the last 3 years and longer has shown this.

I reported on June 3 that public support for carbon pricing is at 63 percent and more action by Government on Climate change at 74 percent. An Essential Vision opinion poll in May 2016 found that there was public Support for Labor’s 45 per cent climate targets and emissions trading.

Even if we look back on public opinion during the 2013 election we uncover the myth that there was a mandate to ‘Axe the Tax’.

While both Labor and Liberal parties refuse to discuss phasing out export coal, interim results from the Fairfax Media’s YourVote tool found that out of about 63,000 responses, about 79 per cent of voters either “strongly agree” or “agree” that the health of the Great Barrier Reef should be prioritised over coal mining.

Major party silence and lack of engagement on climate policies to match the science and our international commitments is one reason that we are likely to see a rise in support for minor parties and candidates, including the Greens, at this Federal election.