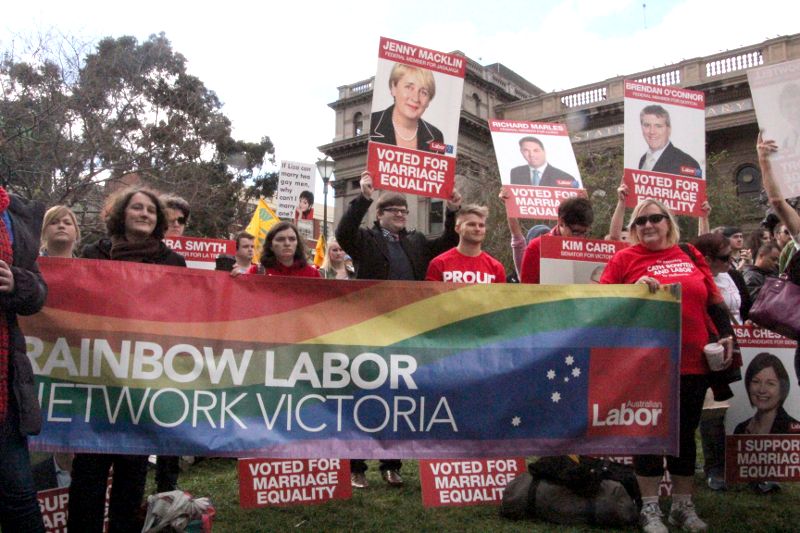 Gay marriage law reform, equal love, is about ending a disrciminatory practice presently enshrined in law. It would be something so easy to do and to move on to much bigger issues. Yet it lingers as an issue at another Federal election.

This week Prime Minister Kevin Rudd promised that if re-elected, he would introduce a bill on the issue within 100 days and allow Labor party members a conscience vote.

Tony Abbott this week labelled gay marriage as “the fashion of the moment” in a radio interview. He has refused so far to similarly allow a conscience vote on the issue by the Liberal Party.

Australian Marriage Equality national director, Rodney Croome, said in a media release “Marriage equality is about love, commitment, family and fairness, all of which are fundamentally important to the majority of Australians.”

According to Australian Marriage Equality website www.vote4love.com.au, the Greens, Australian Sex Party and Socialist Alliance, among many others, all support marriage equality. The Australian Labor Party and Palmer United Party currently allow a conscience vote on the issue. The Liberal Party are currently opposed to marriage law reform but are committed to considering a conscience vote after the election. Family First oppose marriage equality. Other parties not running in Wills are also assessed.

Should ending a discriminatory practice ever be a conscience vote? Our politicians should be leading on this issue, not dithering. I asked Wills candidates in my one-on-one interviews about Gay Marriage law reform. Here is what they had to say:

Kelvin Thomson (ALP): We passed legislation to get rid of provisions which discriminated against gay people in a whole range of areas including finance, superannuation, property and the like. In relation to same sex marriage, there was a bill that came before the parliament that I voted against. The background to that was not that I have a personal objections to gay marriage but the member for Melbourne moved a motion in the parliament asking us to survey our electorates to gauge their opinions, and I voted in favour of that resolution, I therefore carried out a survey. The resolution was passed, and I thought I was in favour of it so I better carry out the survey and I did. A majority of people in the electorate who replied to me, replied opposing it. Some people are surprised by that but that is what happened and having carried out that survey John, I thought you’d look a bit of a fool if you carried out a survey and said no I’m not interested in what you said and I’m going to go and vote in a different direction. I would like to see the Liberal Party give its people a conscience vote on it. I think at the moment, the Labor party is the only party voting in a conscience vote on this issue I think it would be a better parliamentary process if Tony Abbott were to give all his members a conscience vote. There is no prospect of legislative change unless their is a conscience vote on the other side.

Tim Read (Greens): I would have liked to have thought that Australia could lead the way here but it is too late now. I think there are a good dozen or so countries now, many of them European. Many states in the US, not the US nationally. So its now a case of marriage equality being widely considered, a sort of normal human right in a civilised country. The time for pontificating, and I use that word deliberately, about the issue is over. This is something we have just got to do so we stop looking silly. I think that people upset about gay marriage should be reassured that they don’t have to marry a gay person. There can be no reason to object to gay marriage other than churlishness.

Adrian Trajstman (Australian Sex Party): It’s something that is so easy to do. You’ve got Kelvin Thomson opposing the marriage amendment. It was fantastic last night Rudd coming out and saying 100 days if we get in. This is at the forefront of our agenda.

I pointed out to Adrian that Thomson voted according to the results of the survey he conducted. He replied, “That really incenses me. … It is at the forefront of our agenda and it is something that needs to happen, and the ball has started rolling. It’s ridiculously important. If I was in that position I would never have opposed that bill. Never.” 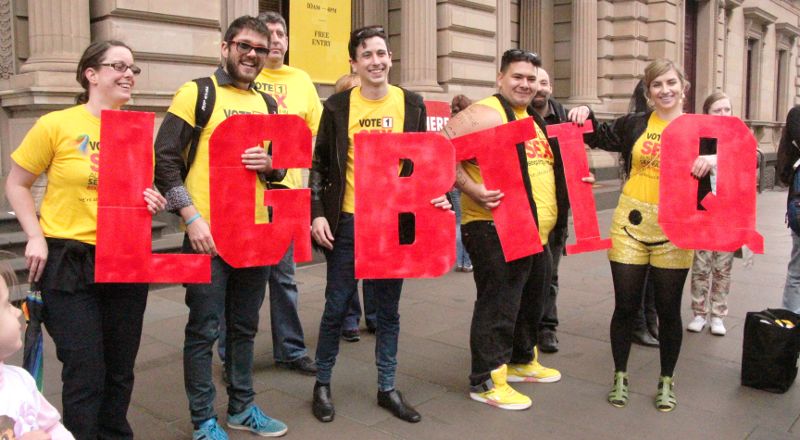 Dean O’Callaghan (Independent standing on Save the Planet policies): Everyone should be able to do whatever they want as long as it doesn’t hurt anyone else.

Maragarita Windisch (Socialist Alliance): I absolutely support marriage equality. This is one of the most fundamental human rights and civil liberties issues that no matter what your gender, no matter what your sexuality you should be able to marry the person you love. I don’t accept that the Labor Party want to have a conscience vote on that. There seems to be no problem making decisions when it comes to cuts very quickly and there is no conscience vote when we go to war. Something when you think about it that should really be so insignificant really. What is the impact of letting people marry for love? There is no big economic cost to that. It seems the Labor Party like the Liberal party are pandering to a very vocal but very small minority in Australia to actually deny people a basic human right. The majority of Australians support marriage equality and it’s time we actually get that.

Note:
Since Friday and the Declaration of Nominations in Wills I have also become aware that Concetta GIGLIA is standing for Family First, and Anne Maree MURRAY-DUFOULON is standing for the Palmer United Party. Over the last two weeks I have also attempted to contact the Liberal Party candidate, Shilpa Hegde, to organise a one-on-one candid interview, including her views on same sex marriage, but I have so far received no follow up to my repeated requests. I have been unable to arrange interviews with these three candidates to ascertain their personal views on marriage equality law reform.